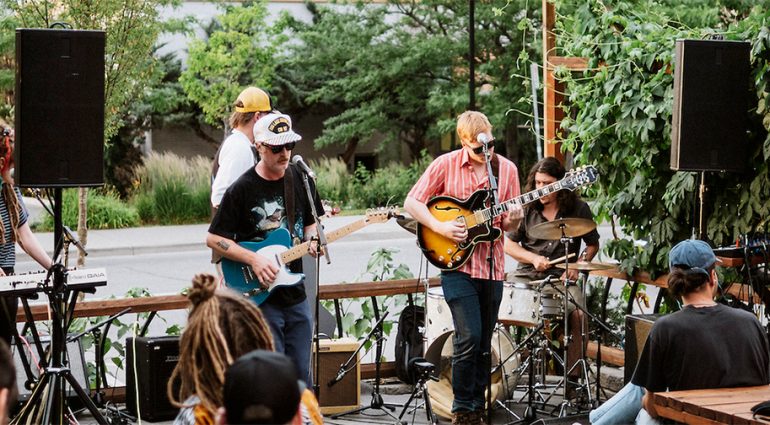 For travellers on their way out west looking for the best local arts and music talent, attending a concert at one of these small venues is one of the easiest ways to connect to a city’s true creative community. Steeped in the do-it-yourself, prairie tradition of blazing one’s own trail, these are the best-kept-secret local music spots to visit.

Saskatoon-based promoter and owner of the Grey Records label Duncan Pickard organizes concerts showcasing local and indie touring acts at Witch Mansion, a staple of Saskatoon’s independent music community. “I kind of feel like house shows are becoming a more important thing,” Pickard reflects on his five years spent putting on shows at the house-turned-concert venue. “It’s a big old house with white pillars, and bands from across Canada come and play here. When we go to other cities and mention it, especially in the underground scene, people will often go ‘Oh, that’s you?’”

Pickard wears his devotion to his city’s arts community on his sleeve. “It’s really important to give artists the freedom to use a space in a different way,” he says about the Witch Mansion, where many of the artists signed to his record label regularly play. “People attending the show don’t feel obliged to buy drinks or whatever; the music is the focal point of the night, as opposed to some bars that have a regular audience who don’t necessarily care what’s going on.”

Perhaps the most interesting fact about The Empress, Edmonton’s most beloved neighborhood bar-turned-venue, is that it was never intended to host concerts at all. Tucked away in a less-frequented corner of the city’s Whyte Avenue bar district, the Empress began its storied history as a quiet pub before gradually transitioning into one of the city’s most celebrated live music venues.

“I feel like anytime there’s a show at the Empress—and it doesn’t even matter what the show is—I’ll want to go,” declares Troy Snaterse of Edmonton alternative-country rockers Altameda. Shows at The Empress often feel more like family reunions than ticketed concerts, the kind of atmosphere where you’re guaranteed to feel a comfort and coziness not possible at Edmonton’s bigger, more established music venues. “It’s raw: just a simple sound system and energy,” explains Snaterse.

JP Lancaster of Kamloops-based five-piece psychedelic pop band At Mission Dolores has been going to great lengths to continue to help develop Kamloops as a live music destination. When Lancaster organizes shows for bands en route to and from Vancouver, his go-to spot is Red Collar Brewing. Featuring hotly-ticketed concerts in their tap room or on their patio overgrown with hop vines, customers can also enjoy famous Red Collar brews including the “Piston 42” Black IPA and the lightning-in-a-bottle “Wobbly Bob” strong ale (my personal favourite). Recent events of note include appearances by Canadian touring acts The Zolas and The Dudes.

“Red Collar is the less-typical rock club experience,” Lancaster explains. “What you’re going to see is more and more bands planning their tour through Kamloops and breaking up that Vancouver to Calgary drive. Now the ball’s rolling, and Kamloops is back on touring bands’ maps.”

As the cost of living skyrockets in cities like Vancouver, smaller cities like Kamloops continue to grow and develop. According to Lancaster, the community couldn’t be more excited, and Red Collar Brewing serves as a focal point: the perfectly-sized place for fostering upcoming talent.

Acclaimed Vancouver-based record producer Jesse Gander has an encyclopedic knowledge of his hometown’s music venues. “Vancouver is a funny and unique market,” he explains with a grin. “All the best venues are underground.”

For Gander, the best crossover of Vancouver’s arts and music community right now can be found at Red Gate, a local Main Street institution that has managed to survive the increasing cost of living brought on by condo development in his city’s downtown core. “It’s a venue focused on diversity, it aims to host events open to all ages, and that’s what makes it unique.”

Red Gate has persevered in a city in which it is notoriously difficult to get a venue off the ground. Citing archaic liquor laws and a lack of affordable spaces, Gander holds Red Gate in high regard for having survived for so long in Vancouver’s challenging climate. When looking for a diverse and exciting cross-section of Vancouver’s current cutting-edge indie arts scene, he concludes that “Red Gate is one of the true underground venues for artistic performances.”