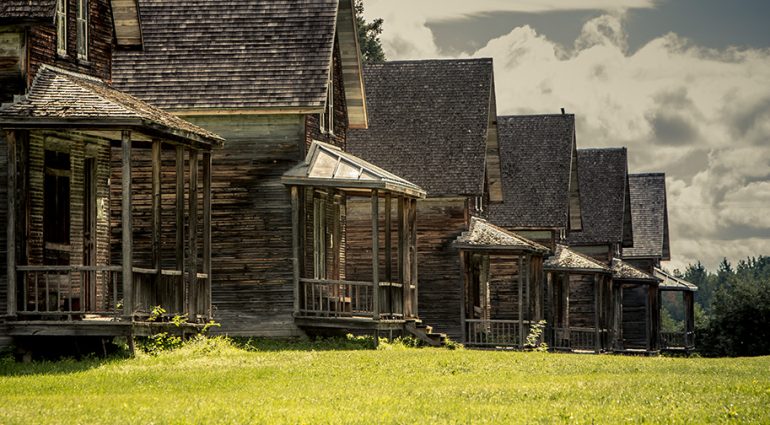 I’m spending the night with the ghosts of Val-Jalbert, in Quebec’s Saguenay-Lac-Saint-Jean region, and I’m running late. I promised friends I’d meet them for dinner at Restaurant du Moulin but all I want is to linger in my room. I’m staying in a restored 1920s white clapboard company house in the middle of an abandoned village, in the middle of the forest, with no cars on the main street, peeling back the mists of time, completely disconnected from society.

In Val-Jalbert, time stopped in 1927—the year the booming pulp mill that sustained this town closed and almost everyone up and left. Once a model, modern village and envy of the area, the town sat idle and gated for decades. Now a revitalized tourist and cultural destination, the beauty is undeniably haunting.

Val-Jalbert has been called Canada’s best-preserved ghost village, but I tell you, there’s ongoing life that beckons you to become part of its story.

Val-Jalbert’s story began in 1901 when Damase Jalbert opened a pulp mill at the base of Ouiatchouan Falls. A company town sprang up and though the mill changed owners over time, life was good. Workers were paid almost double the going rate and company houses had electricity and running water, unheard of luxuries at the time that would only appear elsewhere in Quebec nearly a quarter century later.

For a true feel for the village, go beyond a day tour and book accommodations, sleeping in a restored (and cozy) company house on Rue Saint-Georges or in a room above the general store. The digs are old-timey—but blessedly modern and chic inside. A bonus: At night, guests are nearly alone on site and can wander the abandoned streets or stroll up to admire coloured lights illuminating the mighty Ouiatchouan Falls.

Val-Jalbert’s residents loved their town. And why wouldn’t they? It was a paradise. But when the mill couldn’t switch from mechanical to chemical technology, the owners pulled the plug and shuttered the place. As a one-industry town, it meant the end. Families left in droves.

“It was the first time we saw our parents cry,” a former resident recalls in a moving video on site. Inside the vast, atmospheric Grinder’s Room (where a huge, fast-turning wheel once converted wood into pulp), a touching, multi-sensation immersive show plunges visitors back into the town’s day-to-day life. Sharing the human perspective of the village and its citizens, it’s not to be missed.

Barter at the General Store

“My credit’s no good in there. But you? Keep smiling. It’ll go better for you,” is the advice I received from a costumed character as I stepped onto the sweeping verandah of the town’s ‘supermarket’ (now a gift shop and café-terrace). Val-Jalbert is nothing if not a splendid open-air museum with over 40 heritage buildings where you can practice bartering at the general store, linger in the impressive two-storey convent school—the last of its kind in Quebec—and see where the nuns lived and classes were taught; or visit Ms. Linteau at the post office, where lively animation occurs. Do jump on the red trolleybus for a guided tour around the site—it’s a signature Canadian experience.

At an impressive 72 metres (for perspective, that’s 20 metres higher than Niagara Falls), gasps are guaranteed as visitors catch their first glimpse of glorious Ouiatchouan Falls. Hop on the cable car and ride up, up, up to discover a heady viewpoint looking out over the falls and majestic Lac Saint-Jean. I felt like the queen of Saguenay-Lac-Saint-Jean posing for photos with such a view as my backdrop.

Afterwards, it’s a thrill to step onto the glass viewing platform to hear the roar of the falls and feel the mist spray your face.

For a night of fine dining, step inside the stately stone walls of the former mill and take a seat at Restaurant du Moulin, ably helmed by Chef Gilbert Nault (who smokes his own meat, is a chocolatier and a confectioner). Saguenay’s own revered Perron cheese, and the region’s famed blueberries and tourtières are some of the stars that feature on the breakfast, lunch and table d’hôte menus.

With its spectacular natural setting, waterfalls, and walking trails, exploring Val-Jalbert on foot is a must. A special spirit unfolds as you walk, imagining the ghosts who once (still?) roamed between the lanes of abandoned company homes. Not all are restored, and some sadly are falling in, bleak in their beauty. I didn’t expect to find an abandoned village so welcoming or be so deeply affected by the ghosts of those who made a life in these lanes. But I am. There is hope here, amid the heartbreak, and beauty everywhere. It does not leave you untouched.

Header image: Wander among the abandoned homes of a once thriving industry town.

One thought on “Spend the Night in Val-Jalbert, Canada’s Best-Preserved Ghost Village”