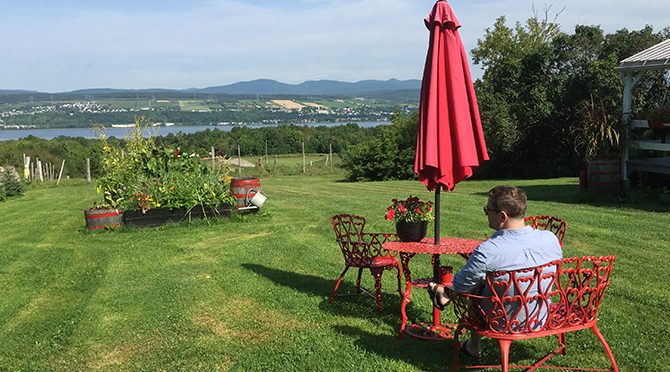 At the end of a particularly busy summer, I was ready for a little rest and relaxation. Not wanting to travel too far from my home in Montreal, I began researching things to do in Quebec City, and off I went, (uncomplaining) boyfriend in tow.

Our trip began with the calming movements of the train from Montreal to Quebec City, out of whose windows the beautiful vistas passed, but with our noses deep in a crossword, we were oblivious. Contemplating one of the answers, I looked up and gaped at a gorgeous orange sunset over the river (Mental note: train views are pretty – remember to look up more often.)

Our first stop, Le Monastère des Augustines should have been easy to find, only a 10-minute walk from the Gare du Palais. Travelling with my boyfriend was a bonus, since we arrived into the city at night and my sense of direction may need a little… improvement. The building is huge, but the entrance is tucked away down an unassuming street. We peeked into a small break in the stone wall that lined the road and were taken aback by the magnificence of the converted monastery. 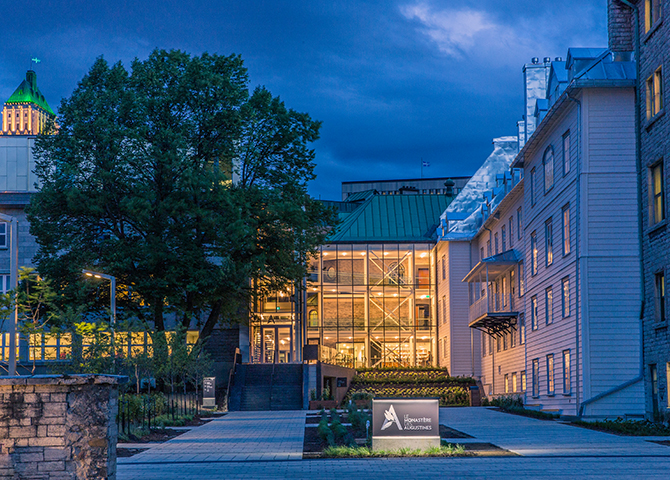 Upon entering, there is an instinctual hush about the place. “Hushing” is not something I’m usually good at doing, but what felt at first like a light chastising (stay quiet!) soon transformed into what it was intended to be: a calming force. The grounds are designed to be functional and soothing; public spaces are well-kept and dotted with chaise lounges, rooms are furnished with no more – and no less – than what is necessary to be comfortable.

Built in 1639, the mission of the three Augustine sisters who travelled to Quebec to open the monastery and hospital was to heal the people – body and soul. Nearly 300 years later, the building’s inaugural intent is alive and well. Being there made it clear, pretty quickly, that my non-train-vista-appreciating self was in need of their help. 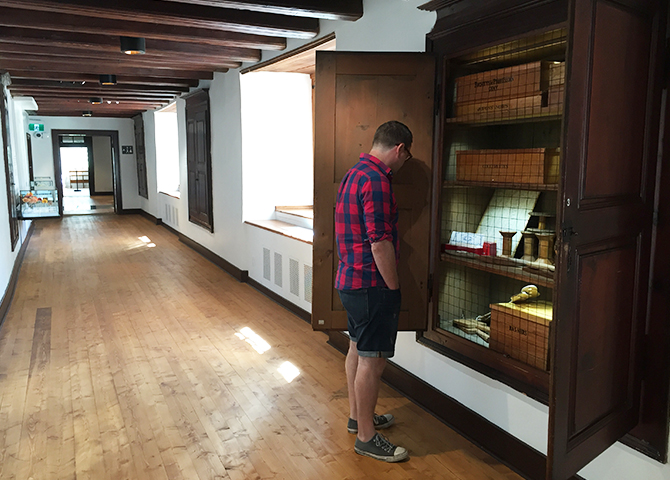 We started the day at the in-silence breakfast (are we noticing a theme here?), so you know, no small talk to worry about! Then our amazing tour guide Marie-Eve Perron took us around the building. Its history is rich, and the story of the industrious, scientific (medical advancements thrived under their guiding hands) and founding sisters is worth a guided tour, and ample time spent in the on-site museum.

Every detail of the building has been considered with care, right down to their original tea collection, crafted using a combination of the herbs and plants grown by the sisters centuries ago. We should have spent the weekend here, doing all the classes and breathing in the life-affirming air, especially given how keenly aware I was of my need for some restoration time, but the city awaited. Reluctantly, we bid the hotel au revoir. I’ll be back. 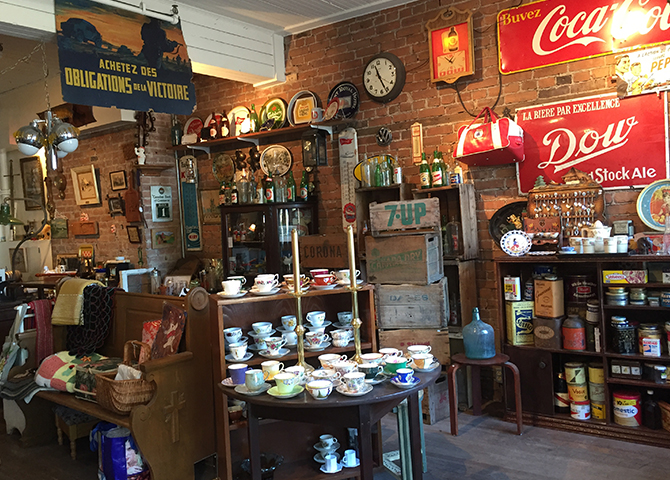 Feeling more serene than the day before, we chose a no-stress wander around the town as our way to acclimatize back into reality. Though at times elbow-to-elbow with tourists and locals, the cobbled-lined streets of old-Quebec are really an “incontournable” (a must) when visiting. Luckily, we found a couple of quiet places along Saint-Paul street to duck into, including Le Buffet de L’Antiquaire, where we enjoyed a simple lunch, and La Nouvelle France Antiquités, an antique shop where we found Bonhomme Carnaval keepsakes dating back to the 1960s (spoiler alert: he hasn’t changed much).

The afternoon was spent getting lost along the upper and lower streets of old-Quebec, and then crossing under the stone wall (the old city’s original protection) into Quartier Saint-Jean-Baptiste. Wandering is probably the best way to get a feel for the city, which is full of architectural and culinary surprises. Don’t miss Chez Temporel, a café hidden in the more residential area of the old-town, and keep your eyes peeled for weird and wonderful painted walls and pillars throughout the city.

Once we had our fill of the urban landscape, we head over to Île d’Orléans, to get in some quality rural time. Though only a 15-minute drive from downtown Quebec City, the island was not as easy to get to as one might think (insider’s tip: rent a car). There is no public transportation to or from the island on weekends, and the taxi company serving the area is comprised of only one (very kind) driver. Luckily, we were able to convince a cab to take us over the bridge, at the base of which was the picturesque Montmorency Falls, and voilà, we were transported into the countryside! 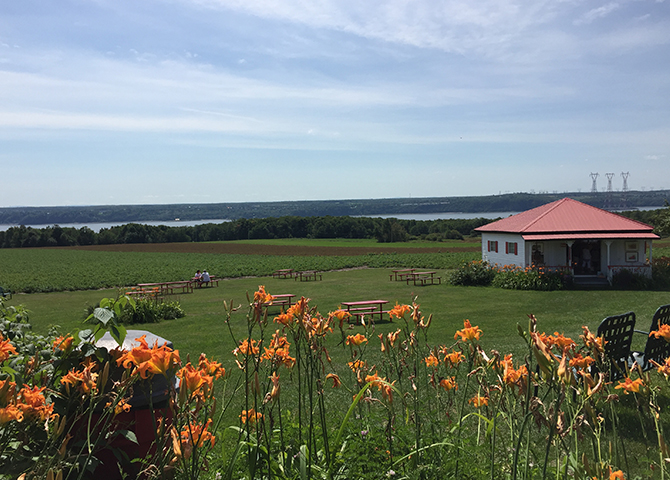 The circumference of Île d’Orléans, known for its berry and vegetable farms, is 67 km and can be cycled, by experts, in two and a half hours according to Ecolocyclo, where we rented our transportation for the morning. For beginner bikers like me, the trek is closer to 7 hours – gulp! Despite the allure of a full day of beautiful vistas with a backdrop of the St. Lawrence on all sides, we (read: my stamina) opted for the 20km circuit that tours the western tip of the island. 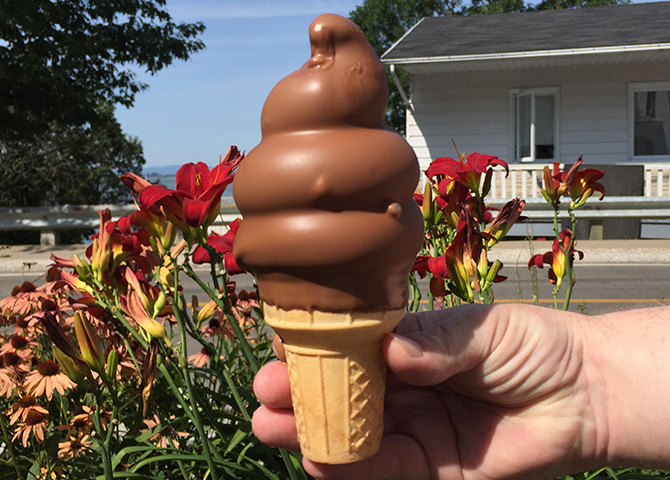 The first half of the ride is mostly downhill, shaded and dotted with great places to visit, including a winery, a few river-side walking paths and the Chocolateire de l’Île d’Orléans, where you’ll find one of the best chocolate-dip ice creams, ever. The second half of the ride, with its hamstring-testing inclines, made us feel better about the massive cones we had just consumed.

On the south side, we got a better sense of residential life on the island. Here, the homes were a combination of manor-style houses with long, rolling lawns and backyards of farmland, and smaller colourful cottages with well-kept gardens. We rolled passed fields bursting with Brussels sprouts, strawberries or other crops, and colourful boxes we (carefully) investigated and discovered to be bee hives. It was beautiful and lush, and it felt like we were a thousand miles from the city. Our last pit-stop on the island was Cassis Monna, where we filled up on samples of the varied cassis-based dips and spreads. Their duck-confit poutine (with wine sauce!) would have to wait for the next trip, as it was time to back to the city for one last discovery. 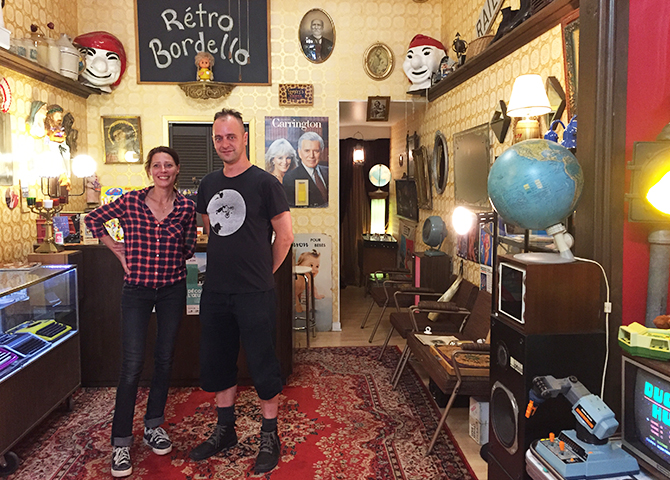 Near the western end of Saint-Joseph, a cute cobblestone road lined with more modern offerings (we called it the yuppie street) is Retro Bordello, opened and owned by the welcoming partners Annie Robitaille (a local) and Mathieu Asselin (from Montreal) one year ago. It was an unusually quiet day, so Annie and Mathieu took us on a nostalgic tour of the games I used to play with my family, which lined the shelves of the colourful shop. With an original version of Milles Bornes, a much-loved card game from my youth, under my arm, I felt my trip was complete.

On the train back, feeling more relaxed and with the crossword still in our suitcase, we kept our eyes on the rolling landscape, making sure not to miss the view.

6 thoughts on “Relaxation and Rejuvenation: What to do in Quebec City”