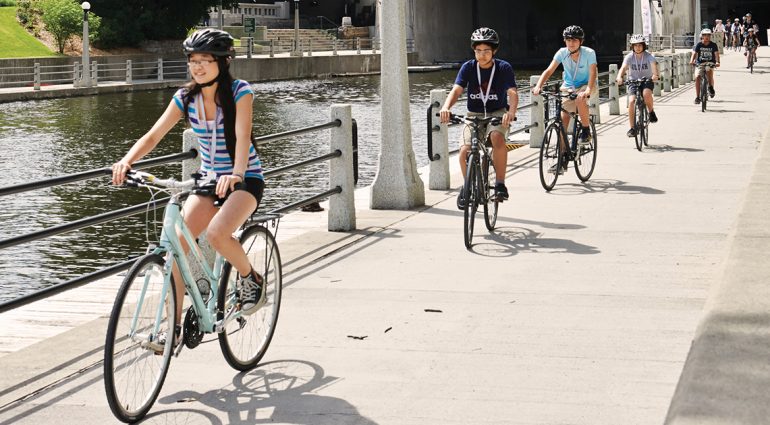 There are so many reasons to go car-free when visiting a city. Along with escaping the frustrations of traffic, GPS apps and parking fees, there is the simple joy of discovering a city on foot. What’s more satisfying than finding a hidden café, green lane or local shop so easily zoomed past in a car?

I’ve been to Ottawa many times, but usually on the outskirts visiting family, and never long enough to get a feel for the city. This time I did it right: I grabbed a couple girlfriends, booked a room downtown (I recommend the Lord Elgin, if you can swing it), and spent the weekend refusing all transport that required fuel. Turns out Ottawa was designed for pedestrians — and cyclists! Blisters aside, but well worth the effort, it was an eye-opening trip full of good old fashioned fun.

Our girls’ weekend started out right, with the first stop at The Rowan gastro pub in Landsdowne – and a Pimm’s No.1 Cup each. Everything on the menu looked amazing, even to my vegetarian pal (they offered two no-meat mains – impressive). I’m no foodie, but I couldn’t stop myself from saying things like, “the textures in this work so well together! And the flavours… so balanced!”

We were staying in the center of nation’s capital. Throw a stone and you’d hit one of a government building, a memorial statue, a museum… or a park. The heart of the city was surprising in its spread and variety. The wide open spaces and the pedestrian and bike-friendly paths that line the streets and the Rideau Canal is what makes this city truly special.

There were many walking-distance options for breakfast on Elgin Street, but we opted for The Lieutenant’s Pump, both for the giggle-worthy name but also because it opened earlier than the Manx Pub, which came highly recommended as well. For a great Americano, this area is also home to one of two cheekily-named Ministry of Coffee cafés.

To get the lay of the land, we booked a bike tour, the headquarters for which was on pedestrian-only Sparks street. Sparks is lined with tour operators of all kinds, but the city really opens up to those on two wheels.

At Escape Bicycle Tours, whose company story is quite inspiring, we met our kind and patient guide and got equipped. Two hours later, we had completed a loop along the Rideau Canal, through neighbourhoods we would never have otherwise seen, across the Ottawa River and back. By the end we were goofy and giddy – both from the kid-like joy of bike riding and from the discoveries made along the way.

On the walk from downtown to Wellington West, surrounded by warehouses and a large parking lot sits a true hidden gem, the Art Is In Bakery. Despite its location, locals flock there for their art-is-in-al (ha!) bread, on which they serve their masterpiece, the Fried Crispy Pickles Melt sandwich.

From there, it was on to Wellington West, which people refer to as Ottawa’s “up-and-coming” neighbourhood, but from what we saw, it had already arrived.

We wandered the local shops, like JV Studios, which sells Canadian-designed jewelry. I snagged some flat silver square studs which have become my go-to earrings. And after a long day of biking, walking and shopping, a gelato at the beautiful Stella Luna was a no-brainer.

Wellington West is also dotted with small galleries, like Cube, trendy barber shops and award-winning restaurants. Our relaxed dinner at Absinthe was a treat – from the cocktails made with their namesake spirit to the strawberry profiterole. Brave types try their Benevolent Burger (it’s two patties, it’s huge, and a portion of the profits go to a shelter for women). For those wanting lighter fare, the Tuna Leche de Tigre Ceviche entrée and Ravioli main, topped with a poached egg were delish.

The weekend we visited coincided with Ottawa’s annual Army Run, which I decided, last-minute, would be fun to do. I’ve never run alongside a more supportive, encouraging group (I did zero training). Five sweaty kilometers later, full of pride, I was ready to see more of our capital.

ByWard Market is a short jaunt over Plaza Bridge, which was good given my post-run jelly-legs. The market itself is designed for tourist meanderings, but is also home to a few local boutiques that we fell in love with. On the north end of Dalhousie Street was Workshop Studio+Boutique, where we unexpectedly spent an hour (and more money than I had planned) on Canadian designs.

As a change from the previous two nights, we opted for a deluxe vegetarian meal at Pure Kitchen. Try the “radical cauliflower wings” and pair the flavourful meal with a strong ginger cocktail like a Dark and Stormy (tested and approved for the cause).

Fortified, we made our way over to Queen Street for our weekend’s great challenge – The Escape Manor. Forty-five frantic, hilarious, mind-bending and creepy (we were in the Asylum room) minutes later, we were one lock away from escaping the room, but failed. Next time we will walk out successful – this, I vow.

Saying I was surprised by how much fun we had on foot – everything we saw, ate, and discovered – would be an understatement. And I only scratched the surface of things to do in Ottawa. Next time I come, the car is definitely staying at home.