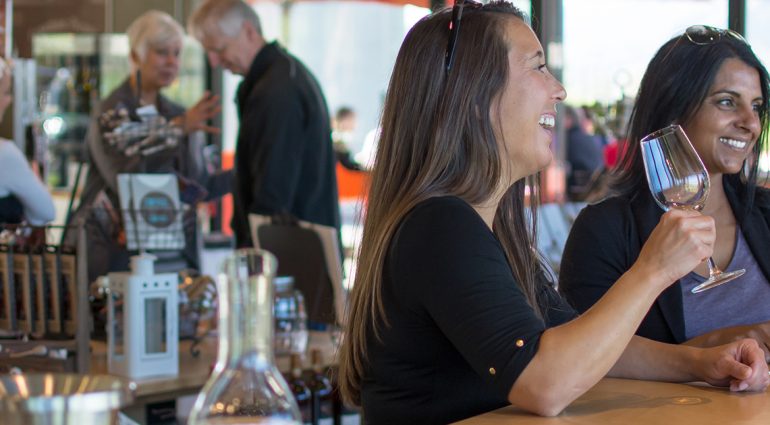 It was my last night in Kamloops and I’d left supper a little late. I was heading out for Vancouver in the morning on the last leg of my first cross-country train trip, which included stops in Edmonton and Jasper. It had been a long day of tasting wines made from grapes I’d never heard of in vineyards scattered around Canada’s newest wine region, and I was moving a little more slowly than usual. So by the time I got out onto Victoria Street, things had started to close up. It was down to pub food, pizza, and a Mexican place called Quilas.

Though Mexican had not been on my list of what to do in Kamloops, BC, when I walked in, the last booth was just settling up, so I was prepared for the bum’s rush. But when I asked if they were closing up, Delmys Garay, the Salvadoran owner welcomed me with her big, warm smile, “We’re never closed when a customer walks in.”

It’s the kind of response you’d expect from a diner in a much smaller town, but Kamloops rests on the cusp between town and city, and manages to offer many of the advantages of a city, without losing its small-town humanity.

Walking down Victoria beginning on the east end of the street at the Thompson Hotel, a cool, ranch-style 60s hotel that’s been updated a few times, the first stop is the Noble Pig. It was Kamloops’ first big brew pub, which rents its dark wood, dark leather space from the Thompson, and where the fried pickles are as good as the pepper ale, and the sour ale — as sour as sauerkraut — is even better.

The battle for breakfast

A block or so down you’ve got two battling breakfast spots, Hello Toast and PDK Cafe (named for the owner’s triplets Paton, Devon, and Kegan).

Two doors apart, it would seem by the line-up on an average weekday morning at 8:30 that Hello Toast is the easy winner. But they’ve got nothing to compare to PDK’s toffee crunch doughnut. Big and doughy, and the beneficiary of modern-day cupcake icing techniques (that is, pastry and icing in a roughly 2:1 ratio), this is possibly the best doughnut that’s ever been, and certainly the best I’ve ever had. They’ve got the best coffee in town, too; well brewed beans from local roaster Cherry Hill. It may not the healthiest breakfast on the block, but it’s one of the tastiest.

The creation of Sam McGee

If you continue to the end of Victoria at 1st Avenue, you’ll see Brownstone on your right. As one of Kamloops’ favourite restaurants, it’s known for being housed in the old CIBC building where Robert Service spent a year banking, writing, and playing polo before being transferred to the Yukon, where he wrote “The Shooting of Dan McGrew” and “The Cremation of Sam McGee.”

But first, take a right on 3rd, and stop for a minute in the middle of the picturesque golden-yellow pedestrian railway crossing. Take a minute to read about Cheng Ging Butt (1858-1929), one of 9,000 Chinese railway workers who built the national railway, for whom the interchange below was named in 2005. (Or you could read and listen to his grandson here.)

Walk from the crossing through the traffic circle and into Riverside Park, a triumph of city planning; it can be tricky to build modern cities around a river. San Antonio and others have constructed river walks, which can work well, but they cast the rivers as something to look at, a backdrop. In Kamloops, the South Thompson River is fully incorporated into the site, the land descending naturally to meet it, complete with a beach in the summer. In autumn, the pier is a favourite spot to contemplate the turning of the leaves.

A few hundred metres east is the barn where the Kamloops Heritage Railway keeps its 1912 steam engine, decommissioned in 1948 and rescued from demolition by the mayor of Kamloops in 1961. With runs pulling cars from various eras seven months of the year, there’s usually at least one opportunity to experience a little of what train travel was like in old CN cars from the 1950s to the 70s, and even a few old VIA Rail cars too.

There are brew pubs all over town. Red Collar on Lansdowne, with its smooth dubbel and passionfruit-tinged tripel, is an easy walk from Victoria. The newest, Iron Road Brewing, is a hike though, up the hill into the Kamloops highlands where the malls are.

Jared Tarswell and Richard Phillips spent their 20s making their fortunes as exploration geologists in the Yukon, but when they decided to cash out and pursue their dreams, they chose Kamloops for Iron Road. “I’m from Princeton,” says Tarswell, “and Richard’s from Prince George, and Kamloops is one of our favourite spots.”

Kamloops is also the centre of Canada’s newest wine region, the climate and soil composition making it the rough oenological equivalent of Alsace. If you’ve got an afternoon and a little more time for some Kamloops activities, you can take a tour of three of the four vineyards, all less than five years old and all a decent drive out of town along the Thompson River, with one of four wine tour companies (I used Tastefull Excursions).

I enjoyed Privato’s Grande Réserve 2012 pinot noir immensely: It can stand up with the best of the Ontario reds. But I didn’t have a bad wine all afternoon. Harper’s Trail Pioneer Block 2016 Riesling is unusually and pleasantly tannic with some good green apple, and even the blueberry fruit wine from Monte Creek was good, probably because it was neither sweet nor tasted like blueberry.

It’s worth the drive through the hilly, semi-arid countryside where Billy Miner plied his train-robbing trade. Bighorn sheep still roam curious and free, and a remarkable number of people are just as welcoming as they were in that Mexican restaurant on my last night in town.

2 thoughts on “Exploring the river city: what to do in Kamloops”