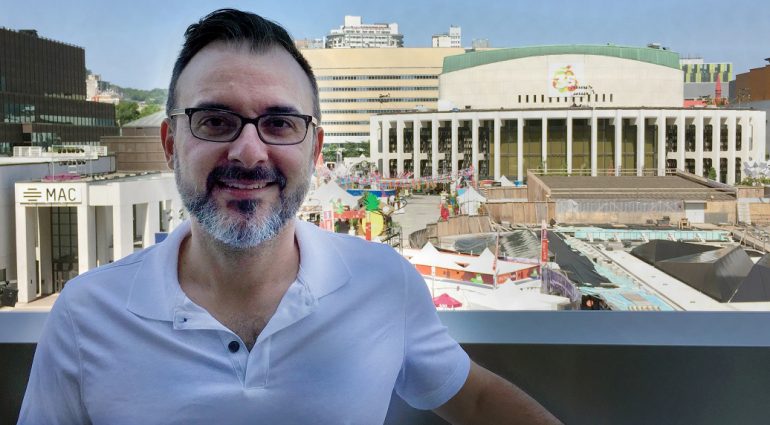 Sitting down with John Catucci, I realized that he could probably write this blog himself. In his new book You Gotta Go Here, a riff on the Food Network’s You Gotta Eat Here, which he hosted for five years, John writes about the hidden gems and hometown favourites across North America. “So you do my job, but with a crew,” I joke with him.

Visiting Montreal for the Just For Laughs festival and foregoing his signature plaid for a simple white polo, John talks about everything  – food, travel, performing – with an enthusiasm that is contagious. As a TV host, comic and author, he’s managed to seamlessly balance all three passions into his work.

Where are your favourite places to go in your hometown of Toronto?

It’s funny because I’m kind of a home-body. I really like my neighbourhood, it’s Corso Italia in Toronto. There’s a bakery that I always go to, it’s called Tre Mari and it’s been around for 60 years. I’ve been going there all my life, so it’s nice to go back as an adult. I’m there a little too much. When the lady behind the deli counter is like, “I’ll see you tomorrow”, it’s like, oh ok…

Do you gravitate more towards the smaller, less posh restaurants?

I really like the whole idea of the mom and pop places, and giving them some love, that they could not necessarily get on their own. It was nice to be able to showcase those places.

Do you have a favourite Canadian festival?

I would have to say Just for Laughs. There’s a special place in my heart for this festival. We came here back in … I think it was 2001, and we [the musical comedy duo the Doo Wops –ed.] won the homegrown competition back then. So, this place is very special to us. As a comic, you dream of getting to Just for Laughs.

Every year it gets bigger and bigger. And not just the performers, but all the food now that’s everywhere. […] When we’re doing the outside show, we keep telling people to buy us churros. They’re so delicious, they’re from a food truck. They are some of the best churros I’ve had – and I’ve had quite a number of churros on the show. 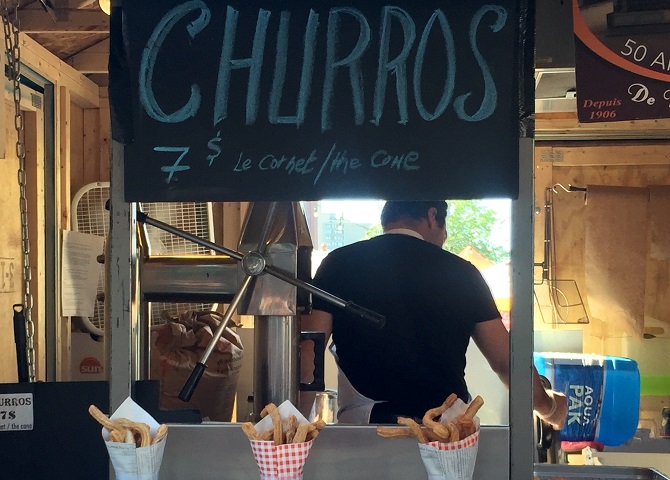 Have you eaten anywhere else in Montreal that you love?

I went to Boustan, Lebanese. That might have been one of the best shawarmas I’ve ever had. I love it that they took the shawarma, and they put it on the grill, and they grilled it up, so you have that char, you taste it, the pita kind of gets crispy, it’s great. 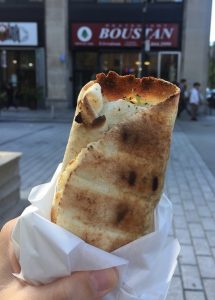 How about a quiz? I’m going to throw the name of a city or town at you, and you name the best place to eat there.

Edmonton: … so there’s the High Level Diner, there’s Sugar Bowl. There’s Tres Carnales, which is a great taqueria and the guys who own it are some of the sweetest guys in the world.

Saskatoon: Saskatoon has a place called the Prairie Harvest Café and it was the first time I had a maple bacon doughnut.

Victoria: Victoria’s got such amazing food. You’ve got John’s Place, you’ve got Pagliacci’s, you’ve got Shine, Pig, Foo, you’ve got Rebar, which is an incredible vegetarian restaurant that we just fell in love with.

Gatineau: Oh, my God. One of the best brunch places I’ve ever been to is called Chez Edgar. Marysol who owns it does this thing called a Dutch Baby, which is a mix of a crepe and a pancake together, this one had pork belly cooked in maple syrup and sharp cheddar, and caramelized apples… every time we’re in Ottawa we will go out to Gatineau. We’ll cross the bridge.

Moncton: Moncton has the Tide and Boar.  They’re great guys. You’ll have a boar poutine and they do polenta fries. Anything deep fried is very yummy. One chef told me, “People go out to restaurants because they don’t own deep fryers at home”. 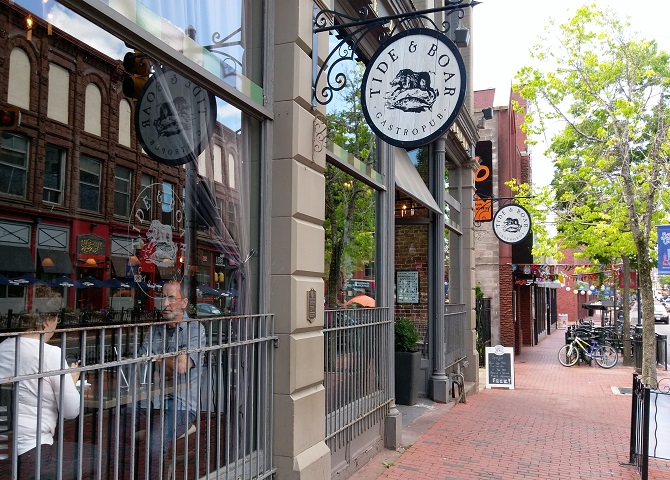 I was doing the math… so we did 150 episodes, and 3 restaurants per episode. So 450 different restaurants. That’s a lot of food. So much food.

And were you on an exercise bike between each meal?

After the first season, the plaid was getting very tight. I told the director… I asked him, “Listen, can you just tell me to put my fork down? Just tell me to stop eating?” Because, no one was telling me that I don’t have to eat everything. I have a tendency to steal fries from people’s plates. Every time I would steal a fry from a customer, he would make me do squats – five squats per fry.

Did you do anything for Canada 150?

We rented a cottage just outside of Bracebridge that had a wood burning pizza oven outside. And I was like – oh! – I’ve worked this on the show, I’ve never made this all by myself. By the last one, I got it.

Check out John Catucci as one half of The Doo Wops at Just For Laughs Montreal on the outdoor stage and in The Ethnic Show.

4 thoughts on “You Gotta Read This: John Catucci’s Best Places to Eat in Canada”