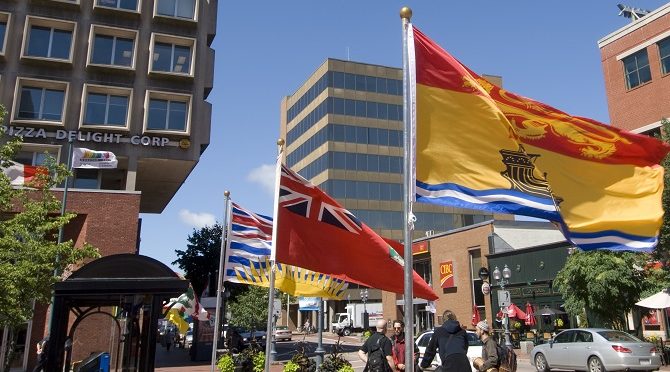 The train from Montreal pulls into the station directly behind an enormous construction project, the latest phase of a decade-long effort to give Moncton, New Brunswick its rightful place at the urban Canadian table. It’s a new $104-million, 7,500-seat event centre, a work in progress that’s getting itself ready to welcome thousands of new visitors, and it’s a pretty good metaphor for Moncton. I’d visited once before Moncton got moving, and once after (to write about it for the Toronto Star). It had been the most striking reformation of a Canadian city I’d seen, and I wanted to see if the changes stuck. I came away with a firmer than ever impression that if you haven’t been to Moncton this century, you haven’t seen Moncton.

The Best Place to Eat in Moncton

One of the first of a new wave of restaurants and bars that followed in the wake of a couple of decades of slow but steady economic progress opened a little more than five years ago on Moncton’s main street, conveniently called Main Street, so I make it my first stop. 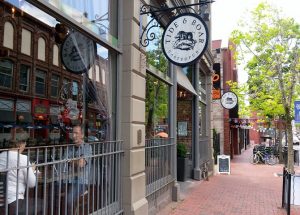 , a pubby play on the tidal bore, the tide-borne wave that roars up the river several times a day (one of Moncton’s three top tourist draws before its renaissance) is a classic gastropub.

On the grub side, the fun house-mirror menu stretches and expands your notion of what pub grub can be. Instead of deep fried mozzarella, they offer fried cheese curds with pepper sauce. Try these, go home, and demand your local pub chuck the mozza and invest in some curds. Ditto the fried oyster mushrooms: one taste and you’ll see what makes Tide & Boar one of the best restaurants and hangouts in Moncton.

Things to do in Moncton (especially if you like beer)

Moncton’s a beer town, it’s tough even finding a cocktail (but if you’re desperate you can go to Third Glass). Pumphouse is probably the Tide & Boar of the beer scene, about 200 metres away on Orange Lane. It opened in 1999, and according to Lilia Fraser, a Kazakh who married a Moncton fire fighter with an entrepreneurial itch, it’s been a hit ever since. They brew all their own beer in the back, and they’re also packed on a weekday afternoon. You can find their beer all over Moncton, and across New Brunswick, I’m told — their blueberry ale and the new Crafty Radler are especially popular — but you’ll want to go in-house, where you can get a tabletop full of tasters and try everything they brew, about 12 taps at any given time. Because Moncton’s still not a fancy town, patrons have taken to pouring the remains of their last beer into their next beer, and Pumphouse has given names to some of the more popular mixes.

Beer’s the thread that runs through modern Moncton’s story. A decade ago, it would have been a tale told by Alexander Keith. But now, even a place called Laundromat Espresso, a coffee shop in an old laundromat on Moncton’s other main street, St. George, has a better selection of beer than the average Toronto pub. When I stopped by, they had Picaroon’s Dark and Stormy Night (Fredericton), Goose Island IPA (Chicago), and Bore City’s I’d Radler Not wheat beer, and that’s just on tap. They’ve got more in the fridge behind the 50s soda shoppe-style bar.

On my way to the Magnetic Hill Winery, named for another of Moncton’s old tourist attractions, my Monctonian driver tells me that her city’s not a pedestrian town. But I think she’s working on outdated data; this Moncton is not the Moncton she grew up in.

Economic prosperity brought about physical changes to the city, and the local government brought in a big-city firm to give draw up a new city plan. One of the leads was Jennifer Keesmaat (host of Invisible City, a podcast about city design), who’s now Toronto’s chief planner and an outspoken advocate for pedestrianization. Their plan has included narrowing streets and maintaining sidewalks that make it more pleasant to walk along Main, and its various offshoots like Orange Lane. The knock-on effects are that all sorts of restaurants and bars have opened within walking distance of each other. With the exception of that drive out to the winery (where you should try a glass of their rhubarb wine while sitting on their terrace overlooking the city some warm afternoon), I walked everywhere. While I was there, the city finished a new pedestrian plaza connecting Main Street to the revitalized Riverfront.

One of the beneficiaries of this urban overhaul is the Saturday Moncton Market, between Main Street and the river, a friendly jumble of knitwear and photography, Dutch cakes and locally blended teas, and A Taste of Syria, a new catering company set up by two refugees who arrived six months ago. Their ras el helou — little chocolate balls rolled in coconut — were delicious, and an early glimpse at the influence the recent wave of Syrian immigrants will be having on the Canadian culinary scene.

The market’s actually a perfect end point to a Moncton train trip. It’s a Saturday market, and it’s less than a kilometre’s walk from the station, where every Saturday afternoon and early evening the Ocean train rumbles out of town to wherever you’re going next.

Hear more about Bert’s trip to Moncton in his interview on CBC radio.

What are your favourite things to do in Moncton?