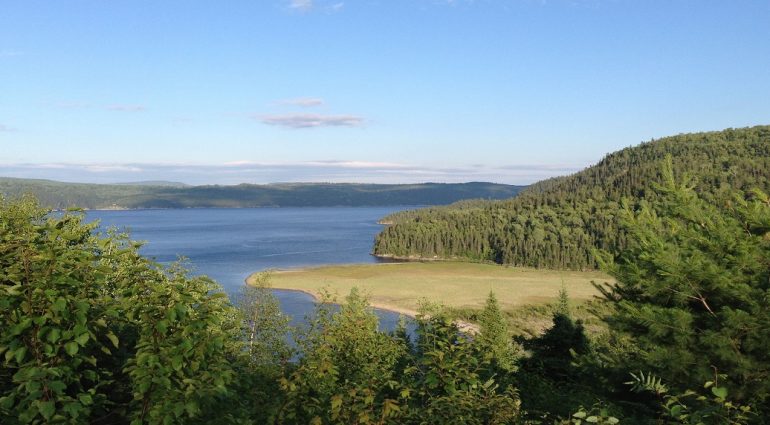 The trip to Saguenay-Lac-Saint-Jean from Montreal is, admittedly, a long journey by train, but I still prefer this option when visiting my birthplace once or twice a year. With every trip I rediscover the same unspoiled scenery, often far away from roads, which takes me to a place beyond the reaches of time. The sporadic cell phone reception may not seem advantageous to most, but for me, it means I am fully immersed in the “here and now”.

Once you arrive in Jonquière there’s so much to see – starting with the Saguenay-St. Lawrence Marine Park. It’s a great place for watching whales, which travel thousands of kilometeres to consume the abundance of seafood (get it?) in this area.  Take note, though, that it’s worth your while to have access to a car, so that you can best explore the Saguenay region. While the bus system may (just barely!) meet your needs in the city, you will be quite restricted in exploring the surrounding area without some wheels.

A Year of Anniversaries

A number of great events being held this summer already make the trip worthwhile. Until mid-August, La Fabuleuse histoire d’un Royaume* tells the story of the region with fanfare! One hundred and fifty volunteer performers, aged 4 to 88, share the stage with drums, trumpets and animals (you read correctly) in a lavish show that truly captures what the people from this area are known for – a zest for living life to the fullest!

This year also marks another major anniversary: four decades ago, the owner of Cap Jaseux ceded his land to the Municipality of Saint-Fulgence. The site was gradually transformed into a highly prized regional centre of activity. Parc Aventure Cap Jaseux has welcomed both active families and thrill seekers since 2001. You can choose from a range of water activities, soar through the air (ziplining) or take up the Via Ferrata challenge. Some routes can even be done at night by the light of the moon!

If you plan on staying the night, the “outdoorsy” accommodations also add to the fun of the park. I thoroughly enjoyed my night in a treehouse a few years ago, but I must admit that a visit to the transparent dome and suspended spheres has inspired another dream: waking up to the splendid view of the Saguenay fjord.

There is no restaurant onsite, but you can grab some take-out at the Bergerie de La Vieille Ferme*, on the road to Cap Jaseux. Choose from deli-inspired meals, salads and hot meals, and don’t forget the dessert: orchard fruit pie!

So Much To Do at the Fjord

One of my favourites in the past few years has been, without a doubt, the marine shuttle service, which stops at a number of villages around the fjord. I especially like the little tour boats with large glass windows so you won’t miss a thing. I’ve done a lot of whale-watching cruises over the years, and saw my first belugas from one of these little boats, where you’re really close to the water.

Cycling enthusiasts can not only discover the 435-kilometre Véloroute du fjord du Saguenay, they can also board the shuttle boat – with their bikes – to get to the opposite shore.

You can also get off at L’Anse-Saint-Jean, and then head over to the main street and make your way to Rebelle des bois*, a boutique that promotes Quebec artisans and designers. Another “can’t-miss” experience: enjoying a crepe on the Café du quai* terrace as you watch the boats go by below you! This charming restaurant, opened in 2013 by a Breton who had settled in the region, uses local products to create the perfect blend of two cultures.

While these shuttles are intended mainly for transportation, nature guides are also on hand to identify certain “must-see” points of interest on the shore, such as the famous statue of Christ at Rivière-Éternité. In keeping with maritime tradition, every boat plays the Ave Maria as it sails by the monument – it’s quite delightful!

The fjord is an area you’ll want to explore from every angle, and I’ll never forget my first sea kayak excursion on these waters.

Setting out from the Village-Vacances Petit-Saguenay*, which is akin to a vacation camp for families (you can either camp or rent a chalet), my excursion was arranged by OrganisAction. I spent the day being awed by the scenery of L’Anse Saint-Étienne and the surrounding area, hoping to see some sea animals. I didn’t spot any whales that day, but it didn’t matter. The excursion remains one of my best memories of this region. It’s just impossible to tire of such a majestic view. 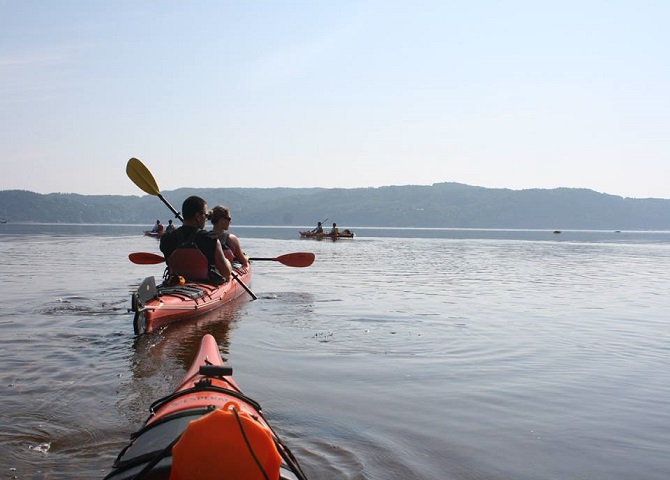 Facing the Village-Vacances Petit-Saguenay from the other shore, I admired the view of the fjord from above, from one of the magnificent, fully equipped yurts (there’s even a bathtub!) set up by Alfred le voisin d’Oscar* in Sacré-Cœur. This was, without question, one of my best “finds” of the past few years.

If you need even more reasons to take a trip to this region, consider visiting in August, when downtown Chicoutimi rocks to the Rythmes du monde* festival and the Fête des saveurs* in Jonquière is a big draw for “foodies”.

So, see you there?