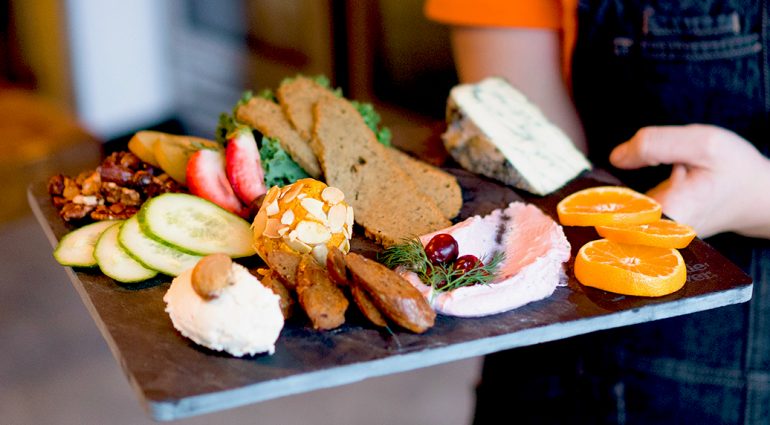 When I first moved to Nova Scotia a decade ago, there were a few nice restaurants, for sure, but the food scene was really just beginning to get going here. I’ve always been a bit of a hippie, and coming from East Vancouver I’d been spoiled when it came to sustainable, ethical food options. Sure, we had a sweet little farmers’ market in the old Keith’s Brewery, and a few restaurants with an eco-friendly approach, but eating in Halifax pretty much meant deep-fried seafood and donairs.

These days, the food scene is completely different, and amazing, which makes me very happy indeed. The massive new Seaport Farmers’ Market (heated by geothermal and solar power and cooled by a green roof) brings food in from all over the province, and we have many restaurants doing exciting things with a thoughtful and sustainable focus.

Whatever kind of food you’re into, whether you’re vegan or a full-blown carnivore, here are some Halifax restaurants that care deeply about where their food comes from, how healthy it is, and their impact on the local environment.

This place served its first farm-to-table meal in 2004 and had a sustainable focus from the very start, seeking the very best organic ingredients from local farmers and producers. During my first few years in “Hali”, their ginger beef was my absolute favourite dish in the city. The food is consistently wonderful, and thoughtful – they only use land-based farm salmon, and their haddock is line-caught, for example.

Opened in in January this year, Real Fake Meats is Halifax’s first vegan butcher shop. Everything they sell is plant-based and made from gluten protein. There’s smokey maple faken, burgers, popcorn “chicken” and all kinds of other gluten-based protein stuff, including a range of cheezes (dairy free cheese) to try.

Chef and owner Lauren Marshall opened the store after playing around with plant-based versions of comfort foods and fun things like donairs and battered fish, and felt inspired to share them with people. “When I realized the demand there was for these foods, we decided that if we didn’t do it, someone else would, so we set up shop,” she says. Already hugely successful, Real Fake Meats often sells out before closing time, so plan to get there early. There are a few seats inside, or you can grab takeout.

This true Halifax hippie haven has been serving up nourishing organic vegan fare since 1995. When I went there for the first time and had a Buddha bowl, I was surprised at how delicious this most healthy thing that I’d ever eaten actually was. I followed that up with a massive gluten free brownie, and while not nearly as healthy, I still left feeling virtuous! Heartwood is a great lunch spot, or just a fine place to grab a coffee and a treat. The original location is on Quinpool Road, and has a cool yoga studio upstairs, but there’s a newer location up in the Hydrostone neighborhood and a take-out shack down on Lower Water Street too.

Serving up Asian fusion with a strong focus on sustainability, Studio East‘s chef/owners/partners Saronn Pov and Ray Bear also own a farm where they grow many of the ingredients they use, while sourcing as much of the rest as possible locally.

Pov’s Cambodian family heritage influences many of their dishes. The pad thai and ramen are amazing, but the menu is varied and changes often so you never quite know what to expect (though you can pretty much guarantee it’ll be tasty). The bright restaurant with a fun vibe features a kitschy vintage décor and doubles as a great spot to soak up the local North End vibe.

Dishing up locally sourced vegan food in massive portions, their superb vegan donair (with the donair being Halifax’s signature food) is a great example of how they use sustainable, local ingredients to fashion vegan versions of your favourite comfort foods. Located a couple blocks back from the Halifax Commons, Wild Leek is a bit out of the way but easy enough to stomp to using GPS (and totally worth it). Be sure to indulge in one of their tasty cupcakes too, or take one for the train ride home.

The last place on our list is an upscale vegan restaurant in the city’s North End that’s all about clean and sustainable eating for a healthier planet. The panko crusted king oyster mushroom “wings” are super tasty, and they have interesting take-out stuff like coconut “bacon” for use on salads at home.

EnVie is fancy enough for a date night, but also fun for lunch with friends. What’s more is that they offer a juice cleanse service, so should you have indulged too much on your Halifax trip, they can have you feeling much better from the inside out.

One thought on “The 6 best sustainable restaurants in Halifax”