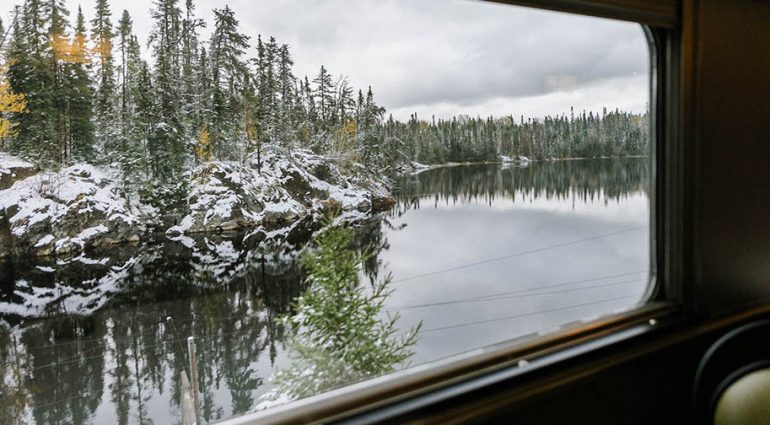 Our friends at Passion Passport hopped aboard our trains once again, this time on the long-distance train, the Canadian. For one person on board, this was more than a journey through the Rocky Mountains, it was a trip down memory lane. Kal Barteski tell us her story about crossing Canada, then and now.

When I boarded the train at Toronto’s Union Station, I was met with a familiar scene. I had taken the same route, bound for Vancouver, nearly 30 years ago and was shocked by the accuracy of my childhood memories.

I was excited to board as I longed to be immersed in the Canadian landscape. Spending 96 hours on a train— just as I did all those years ago — sounded like an adventure that I sorely needed. Although I was concerned about being disconnected from my life back home, I viewed it as a way to reconnect with my homeland and my inner child.

Since I had travelled by train in the past, I decided not to look at the schedule or the specifics of the route — I believe that one of the joys of travel is embracing the unexpected. That said, it still took some getting used to. Letting go of our overscheduled lives doesn’t come naturally, it takes effort to be in the moment. But I’ve learned that when you push through the impatience that comes with the modern age and lean into the present, you often find yourself struck by the beauty that surrounds you.

The first time I took this journey, I travelled with my mother, my father and my brother. This time I was accompanied by a group of new colleagues from Passion Passport — three creatives who had joined me to capture the similarities and differences of Canada’s provinces, along with the magic that the rail line offers.

As the engine guided us from east to west, the country’s landscape did not betray my memories. The land seemed to be frozen in time, perfectly aligned with my childhood accounts. From the Boreal forest to the grasslands to the Rockies, each region amazed me in its own unique way.

Although the views were as I remembered them, I found myself experiencing the journey differently, internally. I began to discover a sense of community among my fellow train-goers, as well as a sense of peace and contentment within the trip itself. While not every bend showcased jaw-dropping scenes, each one offered something new: an opportunity to explore the terrain with my eyes and my imagination.

As a wildlife artist, I found the route particularly inspiring. And though I was able to spot several furry and feathered friends along the way, I was mostly taken by the way the Canadian landscape is laid out. It unfolded like an album of music.

On a map, you see the various territories with their geographic distinctions; but as you move along the route, certain elements stick around, while others come and go. And all the while, the blue sky followed us along the tracks. In that sense, the journey felt like visual music — with elements playing off one another, flowing together, and coming together as one whole picture that was as memorable as the first time I saw it. It made me realize how interconnected everything was — from the provinces to the cities we moved through, to the people I shared the experience with. Every single person on that train was connected by the rail line, seated on the same cars, looking at the same scenes. I found that moving.

As a 10-year-old, this journey was a gift. Somewhere along the line, it became part of my being. To be able to come back and see the beauty that I had tucked away inside my memory all those years ago was an even greater gift.

Click here to learn more about journeying on the Canadian.

One thought on “Passion Passport: A Journey Across Canada”