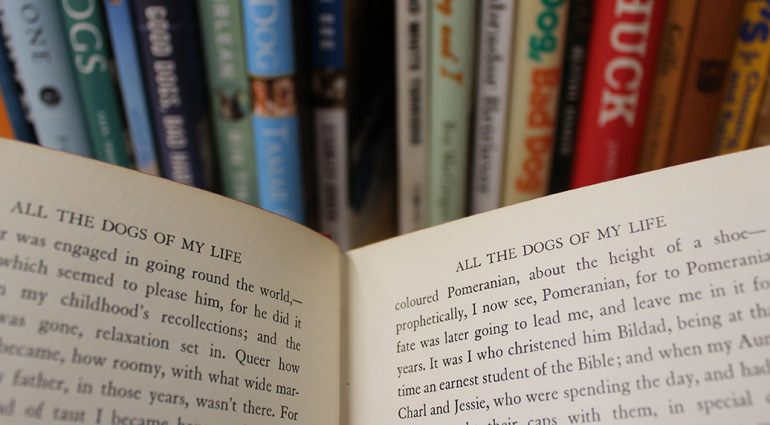 We took our pooch on the train to London, for a weekend of canine capers.

Last summer, we adopted Piña, a sassy little hurricane-rescue dog from Texas. She likes nothing better than hanging out with the girls, aka my daughter, Aimée, and myself. So when we heard that VIA Rail had updated its policy around taking small dogs and cats in the passenger car, we decided to bring her along for a couple days of relaxing pawlidays in London, Ontario.

A woof over our head

We booked dog-friendly digs at Hotel Metro, a boutique hotel right by Covent Gardens Market, and less than a ten-minute walk from London train station. (They welcome furry travellers up to 25lb that are quiet and non-destructive.) Piña was happy to stretch her legs after the trip. Sporting her rainbow coat, she blended in well with the urban art near our hotel on Dundas Street—a psychedelic mural of a moose, bear, wolf and turtle, by London graffiti artists Ryan Mahy and Devin Ryan.

The love Aimée and I have for dogs is matched only by our love of old books, vintage maps and quirky antiquities. We discovered all those things at three-story secondhand bookstore, Attic Books, with the bonus of a big jar of dog treats at the cash register, which really got Piña’s tail wagging. We lounged around in armchairs reading astrology guides and giggling at the covers of bodice rippers, then splurged on some 100-year-old doggie Valentines cards, as well as an antique map of West Africa and a fabulous illustrated book about poodles.

Piña was long overdue a bang trim, so we dropped her off at Bark and Purr for a bath, pedicure, and tidy up. That gave my daughter and me a few hours to visit nearby Wortley Village for a vegan lunch at Plant Matter Kitchen. Neither of us is actually vegan, but we’re both big animal lovers, and we contemplated taking the leap after tasting the deliciously creamy mac and cheese and surprisingly juicy beyond meat burger.

For dessert, Aimée popped into Black Walnut Bakery Café to try the famous cruffin: a croissant-slash-muffin filled with egg custard, and then it was time to pick up Piña, who was just finishing up her spa treatment and looking super fluffy and cute.

Since this trip was all about Piña, we did a little shopping for her in some local pet boutiques. At The Cat’s Bark, she met Walter—a rescue cat—and true to her name (look it up in Spanish!), Piña nibbled on some tasty pineapple dog treats. Then at A Village Tail, she checked out the squeaky toys before making herself at home in the plushest bed she could find. Meanwhile, we picked her up some PJs and fancy treats for our girls’ night in that evening.

After a long day of walking and exploring, we got cozy in our pyjamas at the hotel (note the cuteness of Piña’s PJ booty buttons) and ordered room service from Gnosh Dining + Cocktails, their in-house restaurant. While I wolfed down the fragrantly spiced Broad Noodle Pad Thai with shrimp and Aimée tucked into Moroccan-style lamb lollipops, Piña nibbled delicately on a cookie we picked up at A Village Tail, which was handmade in London by Bosco and Roxy’s Gourmet Dog Treat Bakery.

Bark in the park

There are five off-leash parks in London. Fun (but also very sad) fact: One of them is named after a police dog, Caesar, who died in the line of duty, protecting his handler from an armed robber. Another has a river and butterfly garden in the leash-only areas. It was hard to pick, but we ended up taking our Sunday morning walk in Springbank Park, so we could hike along the Thames. There are 30km of forested trails to get tuckered out on in that one park. Our little Texan terrier saw Canada geese there, for the first time, which may have been the highlight of her London adventures (though a little less fun for them).

Lapping up the music

Our last stop, before jumping on the train home, was London Brewing Cooperative, in Old East Village, where the Sunday Acoustics AfterTunes sessions was happening—and doggos were welcome. At this workers-owned brewing co-op, the beers are made with locally farmed hops and barley, and they have cheeky names like Perky Porter and Airwaves IPA. Kids and teetotallers can enjoy the kombucha on tap. The London Men of Accord were harmonizing their hearts out when we stopped by. And apparently, barbershop choir songs are Piña’s jam, because she hopped up onto one of the singer’s laps to take in the show all while having her ears rubbed. It took some convincing for her to leave so that we could catch the last train home.

Take note pet owners: The reservation for travelling with a pet must be made at the same time as the purchase of the ticket and at least two days before departure. Space is limited to two pets per train car and subject to availability.

To give a dog like Piña a second chance, check out the Redemption Paws adoptables page.

One thought on “Dog Days in London, Ontario”