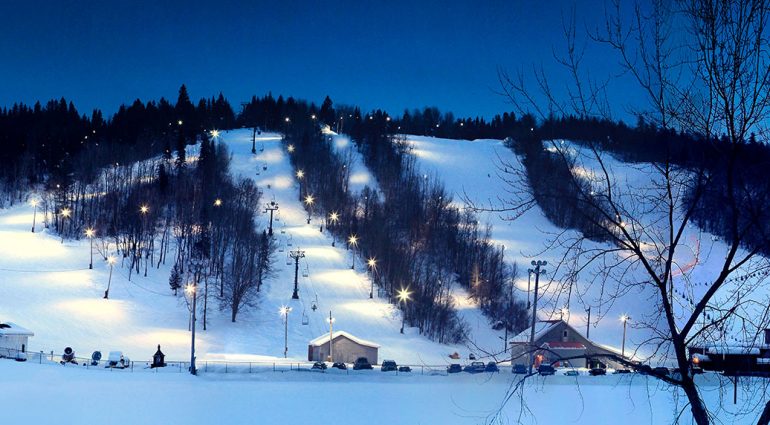 There’s something magical about a wintertime train ride. The further you get from the city, the more pristine the snowy landscapes become. The skyscrapers give way to forest. You have a front-row seat for nature’s spontaneous performances. Snowflakes float down to rest on tree branches. A gust of wind ruffles the needles of a spruce tree. With any luck, you may even catch a glimpse of a hare or a partridge.

The train my daughter and I are riding today goes as far as Senneterre. We get off at the La Tuque station, not far from Hervey Junction, where the cars heading to Saguenay-Lac-Saint-Jean split off from those on their way to Abitibi. A rare January rain is falling.

The La Tuque station is also home to the town’s tourism office, a perfect spot to find inspiration for our trip. I learn that the municipality owes its name to a mountain that was shaped rather like, you guessed it, a tuque. “Part of it was destroyed when the dam was built,” explains Marie-Josée Tousignant, who coordinates the tourist information and promotional activities.

Not far from downtown, families can hit the slopes at Ski La Tuque, which boasts 13 hills, nine of which are lit for night skiing. There is a ski school and a snowpark, and you can also go snow tubing, not to mention the 40 km of cross-country ski trails. Unfortunately, today’s unusual wet conditions are not ideal for any of these activities. We’re just going to have to plan for another visit!

The Parc du Lac Saint-Louis, in the centre of town, seems to appear out of nowhere. In it, there’s a tiny body of water, lac Saint-Louis. “Soon there’ll be an Aboriginal interpretation centre and a boutique,” Marie-Josée tells us. It was around this small lake that the town sprung up long ago.

Like many towns in Quebec, La Tuque has its own microbreweries, La Pécheresse and the forthcoming Le Mouton Noir (beer available by March, open to the public by summer). And if you’re looking for a good meal to go along with that local brew, Le Biztro and Le Boké are two great spots to keep in mind.

Today, we are heading toward Club Odanak, located on the ancestral territory of the Atikamekw nation, but first we make a stop at the Parc des chutes de la Petite-Rivière-Bostonnais. The park is open from January to March and from May to the end of October, and admission is free. During the winter months, you can slip on your skates or rent a pair of snowshoes and take in the fresh air. In the summer, a guide welcomes visitors at the old trading post, and at the Centre d’interprétation de la rivière Saint-Maurice, you can learn about log driving and the important role it played in the history of the town. Fun fact: the poet, writer and singer-songwriter Félix Leclerc was born in La Tuque. The story of his childhood is told on interpretation panels.

There is a growing resurgence of Aboriginal culture in the region, which is one of the reasons I was interested in spending some time in the area, more specifically at Club Odanak. Outdoor enthusiasts can also check out other outfitters like Windigo, a favourite of snowmobilers, Waban-Aki, where you can spend the night in an igloo, and Domaine Touristique La Tuque, with its indoor pool and Nordic spa.

Perhaps you’re wondering about my decision to go to a hunting and fishing lodge in the middle of winter, with a child. The easy answer is that this place is also the most incredible playground. Club Odanak has an unbelievable 45 km2 of land, which includes over 40 km of walking trails and 16 lakes and ponds. It promises endless fun, and a weekend rich in discoveries.

We find the outfitter, about 20 minutes from the station, and are greeted by Steve and Véronique, the managers. As the parents of five children, they put special emphasis on the family-friendly aspects of the site. And their two youngest, twins Danaë and Livia, are without question the club’s best ambassadors! This bright pair, just slightly younger than my daughter, take her under their wing immediately, as if she’d always been part of the family.

On site, you can visit the log cabin of “Ti-Vieux,” the son of the first owner of the land, who lived here back in the 1970s. The cabin is just steps from the lodge, across from Lac Castor. In the 1990s, a French outdoor enthusiast acquired the site with plans to build a resort, and the Conseil de la Nation Atikamekw de Wemotaci bought it back in 2003. The club now offers 48 rooms in its three buildings.

In the winter, family activities include snowshoeing, skating on Lac Castor, cross-country skiing, ice fishing and dogsledding. On the day we arrive, however, two of the dogs have just given birth to new litters, so dogsledding is out for now. But disappointment quickly gives way to delight, because: puppies! We spend a good amount of time cuddling these balls of fur, who will also pull the sleds once they’ve grown as big and strong as their mothers.

Véronique doesn’t miss an opportunity to share the culture and values of her people with us. In the dining room, for example, she points out the murals illustrating the six seasons in Aboriginal culture. In addition to the four we already know, there is “sikon,” or pre-spring, and “pitcipon,” or pre-winter. As we’re out snowshoeing, Véronique also tells us some of the basics of trapping.

The great outdoors for everyone!

Snowmobilers stop by the lodge regularly to grab a drink or a bite at the bar or restaurant. The day after our arrival, the mercury drops to -30°C. A dramatic change in temperature, to be sure, but it isn’t going to keep us inside all day. The biggest advantage of the lodge is the possibility of enjoying a variety of activities nearby, so you can come back and warm up whenever you need to. After sliding, the children race back indoors to play with the puppies by the fireplace. In milder temperatures, the 40 km of trails would have kept us outside playing all day!

The last day of our stay is just as cold, but the sun is shining. Our goal for the morning: catch a fish! While ice fishing is possible on other lakes, we choose to stay at Lac Castor and try to catch something for Ben, the cook, to prepare for lunch, something he does for guests of the lodge. No luck this time, but as I optimistically watched over the lines, the girls alternated between sliding and cross-country skiing.

Ben may not have any fish to cook up for today’s lunch, but we’re still happy, with rosy cheeks and a pocketful of happy memories!

3 thoughts on “Winter in La Tuque”