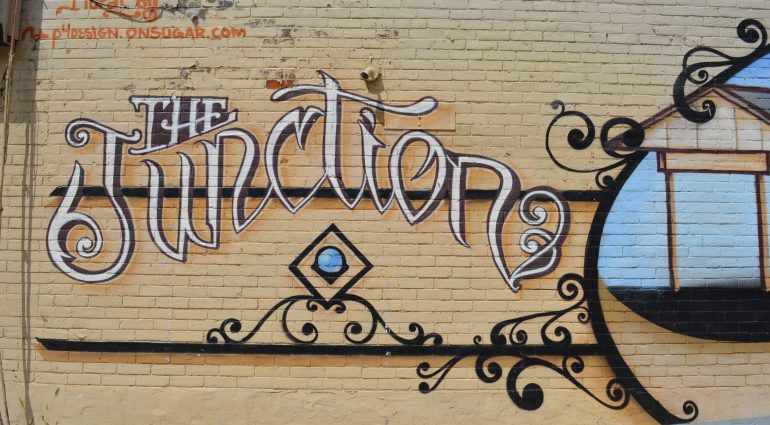 Named for its location—amid a criss-cross of railway lines—the Junction is one of Toronto’s most vibrant West End neighbourhoods. Just north of High Park, and south of the Stockyards District, it was once home to factories, mills and meat packing plants. Today it’s like Etsy come to life, with independent businesses offering everything from beard trims to book-club cocktails, from vintage vinyl to vegan cinnamon buns.

As a Torontonian, I love this tight-knit hub of creativity. Here are some of my suggestions for a day of eating, drinking, shopping and having fun.

9:00am: Start with a morning latté and pistachio cake at Full Stop, a retro airport-themed café with a jet-plane mural and glossy orange departure-lounge seating that make you feel like you should have your boarding pass handy.

10:30am: Ready for something heartier? Hit iconic Junction deli When the Pig Came Home. Go with a menu staple like smoked meat, PEI brisket (brined for 10 days then smoked for 12 hours!) or thick cut house-cured peameal bacon on a bun. Or make like a true Junctionite and try something from the secret menu—“Sandwiches Named After Wonderful People.”

11:30am: Miki Rubin and Heather Phillips, the co-owners of ARTiculations, are both sculptors and Junction residents devoted to their artsy hood. “It’s so community oriented here—my kids go to school with my customers’ kids,” Miki says.

Visit ARTiculations for the juried exhibitions, fun stationary, and drop-in workshops in everything from Letterpress to Pointed-Pen Calligraphy. Another big draw? Charlie, the goldendoodle in residence.

1pm: Save space for a sweet treat from the original Bunners Bakeshop, a vegan and gluten-free bakery. They’re famous for their cinnamon buns, but Sarah at the counter recommends the Josephine Louise. It’s a red-velvet whoopee-style sandwich cake with a chocolate-dip coating, named in honour of the Joe Louis—a junk-food snack found in every self-respecting corner store.

2pm: There are cutesy flower stores, an espresso bike store and even a dog lounge in this hood, but for a little bit of everything, go clothing and gift shopping at The Beau & Bauble and its little brother store Beau Men’s. Kate Elia, a former costume designer, owns and curates both boutiques. Find irreverent greeting cards, lip tints by French Girl and Toronto-made jewellery at the Beau & Bauble. At Beau, bestsellers include neck-nuzzle-inducing Duke Cannon solid colognes and fish-emblazoned tin cups and coffee flasks.

Dinner and Drinks in Junction

Early evening: At Famous Last Words, book nerds can order from a book-inspired cocktail menu at a bar tiled with 10,000 British Scrabble pieces. There are drop-in book clubs, launches and trivia nights for all, and when existing book clubs call ahead, bartenders will create a custom cocktail for them. “They’re reading Dune Messiah,” says bartender Aleks Russell nodding over at the group in the back corner. “I made them a drink with 43 Copper Pot whisky, sweet vermouth, citric acid, coffee syrup, saline, and cardamom bitters. It’s based on a drug consumed in the novel, called Mélange, that they describe like a bitter spice.”

8pm: The Hole in the Wall is a long and skinny corridor of a bar with comfy leather banquettes and a gloriously oversized Art Déco light chandelier. In the evenings they serve fancied-up pub grub like Buffalo duck confit wings, Spicy Chinatown Calamari and escargots, and there’s live music.

It’s tight inside, so you may end up sitting with people you don’t know—a good way to meet the locals. Finish the day by sipping a local craft beer from Junction Craft Brewing, which nods to the neighbourhood’s railway roots with names like Trainspotter Craft Lager, Stationmaster’s Stout, and Engineer’s IPA.

2 thoughts on “A Day in Toronto’s Junction Neighbourhood”