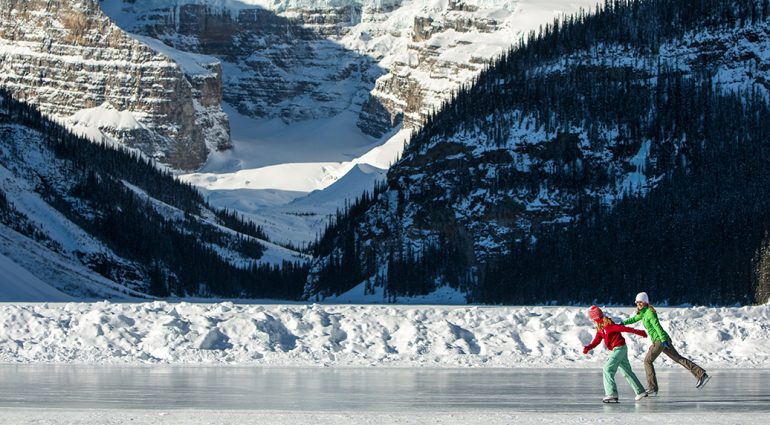 Let’s face it: between the subzero temperatures and dwindling hours of daylight, Canadian winters can feel endless. Luckily for us, we have a knack for turning even the coldest and iciest conditions into some form of entertainment or exciting activity.

In Canada, skating and winter go together like YouTube and cat videos. And although I’ve been cursed with an embarrassing lack of coordination and athletic ability, I have always loved lacing up a pair of skates and hitting the ice. There’s just something about braving the crisp frosty air, falling down a bunch of times and then rewarding myself with hot chocolate that makes me feel oddly patriotic.

The country is chock full of impressive man-made and natural outdoor rinks. From icy ponds on mountain tops, to rinks shimmering below the city lights, here is a list of skating rinks that even Elvis Stojko would be proud of. So bundle up, get out there and embrace this wonderful snow globe we call home.

The Montreal area has a lengthy list of great ice skating options like Beaver Lake at the foot of the mountain and the rink in the Old Port, but if you head north about an hour and a half, you’ll find yourself in St. Sauver’s quaint John H. Molson Park. Tucked away in the woods, the park offers two kilometers of rustic natural trails, two skating rinks and a chalet to cozy up in and have un bon chocolat chaud. Want to give the skates a rest? You can also hike through the trails or try your hand at snowshoeing.

It’s impossible to look at a photo of Lake Louise and not turn into a real life version of the heart-eyes emoji. Although the area has become a magnet for tourists due to its jaw dropping landscapes, many travellers often forego a visit during the winter and book their trips in the warmer months.

But from December until April (weather permitting), the Fairmont Chateau Lake Louise rents out skates and clears away the snow, allowing you to sashay across the frozen lake while marveling at the snow-covered Rockies. There’s also a rink next door where hockey buffs can shoot and score to their hearts’ content. If you’re all tuckered out from a day of skating, you can warm up by the outdoor fire pit. Bonus: there’s also a giant ice castle to live out all of your Frozen daydreams.

Marvin Gaye had it right: there ain’t no mountain high enough…for skating that is! On top of Grouse Mountain in Vancouver sits an 8,000 square-foot frozen pond, perfect for a day of ice skating and taking in some spectacular sights. The mountain also offers visitors the opportunity to assemble their own team of players and rent out the rink for a private hockey game. Along with the ice time, you can take part in a bounty of other outdoor activities like zip-lining, snowshoeing, skiing, snowboarding and going on an illuminated night walk.

Named after the location where the Assiniboine and Red rivers converge, the Forks —just a five minute walk from Union Station— is nestled in Winnipeg’s downtown core. During the winter when the water freezes over, the Red River Mutual Trail becomes the world’s longest natural skating rink. There’s also a kilometre of on-land trails and a smaller skating rink below the Forks’ canopy. Those looking to escape the cold for a few minutes can head to the warming huts, designed as part of an annual architecture competition.

And finally, no skating list would be complete without mentioning the Rideau Canal in Ottawa, officially named a UNESCO World Heritage Site in 2007. While the Red River Mutual Trail may be the longest natural trail in the world, the canal is billed as the largest, extending over 7.8 kilometers. Free to the public, skating along the canal has become part of the quintessential Canadian winter experience, drawing thousands of visitors every year. You can even rent a sleigh and relax as you make your way across the ice. While you’re at it, have a Beaver Tail and really immerse yourself in the Canadian experience.

Here are a few other rinks around the country worth travelling to: