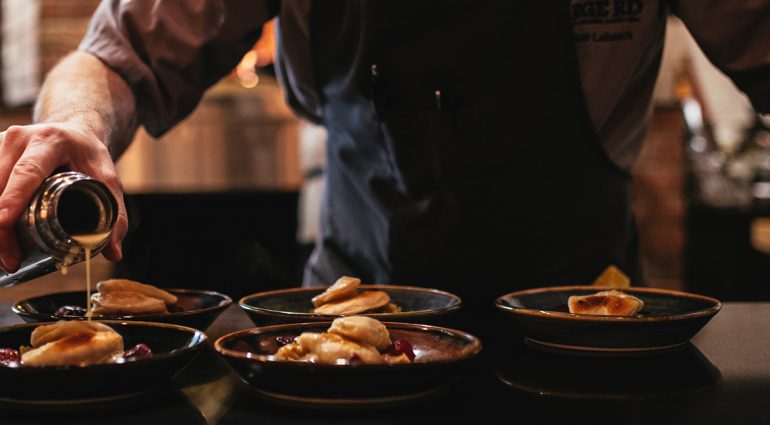 As a 17-year-old boy, I believed the Uncle Willy’s all-you-can-eat buffet restaurant chain in Vancouver and Victoria represented the pinnacle of dining excellence. Granted, I was young, naive, and very hungry. Yet even though my tastes have expanded as I’ve travelled the globe, I still sometimes lament that there just isn’t enough food on my plate at trendy, chic eateries. I want places where the portion size matches the passion of the chefs.

Fortunately, Canada is full of eclectic restaurants that serve amazing, hearty meals — even if our overall commitment to quantity doesn’t quite match that of our American cousins. From fine dining to down-home pub fare, here are five restaurants in major Canadian cities that deliver the goods for every palate and budget.

It’s a capital idea to head to Big Rig Kitchen and Brewery before hitting up an Ottawa Senators hockey game. A short drive from the Canadian Tire Centre arena, this spacious brewpub takes its name from the nickname of co-founder Chris Phillips, a 6-foot-3, 215-pound Senators defenceman who played 1,179 NHL games from 1997 to 2015.

If you’re aiming to rival Phillips’ dimensions, tuck into a heaping platter of pulled chicken nachos or the Texan-style flank steak with goat cheese mashed potatoes. Wash it all down with one of Big Rig’s acclaimed craft beers, like Midnight Kissed My Cow (a creamy double chocolate milk stout) or Alpha Bomb (a super-hoppy unfiltered IPA). For dessert, another sure-fire score is the Colossal Cookie, a fresh-baked 12-inch chocolate chip cookie with maple walnut ice cream.

From a geographic perspective, I never expected to find a great Cajun and Creole eatery in landlocked Saskatoon. From a gourmand’s perspective, Bon Temps Cafe is a can’t-miss on central 2nd Avenue. Celebrating its fifth anniversary in 2018, this popular spot offers a vintage New Orleans vibe with giant lobster sculptures decorating the walls.

On a recent Sunday brunch visit, I dug into a hearty cup of gumbo loaded with chicken and sausage, and then downed a Bayou BBQ Beef Brisket Po Boy sandwich on fresh-baked French bread, along with a huge garden salad. Meanwhile, two fiddle players and a keyboardist pumped out Louisiana-style bluegrass music. Jazz and blues artists get your juices flowing on Tuesdays and Thursdays.

Located in the diverse Montreal borough of Outremont, this Syrian restaurant is renowned among locals for its huge, mouth-watering meals. From lamb shank with okra, tomato, and apricots to kibbeh croquettes with pomegranate and pine nuts, it’s an incredible symphony of Middle Eastern flavors. The baklava ice cream offers a sensational dessert finale. And if you can’t make up your mind on what to order, you can opt for the traditional Syrian “tasting” menu – but arrive with an empty stomach, it’s way more than just a taste.

The gorgeous red ceiling adorned with lanterns and the glassed-in wine cellar further enhance this dining experience created by award-winning owner-chef Fuad Alnirabie. Reservations are highly recommended, especially later in the week. The popularity of Damas is no wonder, as you’ll head home with not only great memories but also succulent leftovers.

Named after a Barbados-born sailor who became Vancouver’s first official lifeguard, Joe Fortes is a life-saver when it comes to big, quality portions. The bustling, 1985-founded restaurant lures many diners with “Joe’s Classics” seafood dishes, but also satisfies carnivorous cravings with its pork chop in a soy citrus marinade, served with buttermilk mashed potatoes. Between courses, dip warm bread in the signature lobster oil with balsamic vinegar.

Big, sinful desserts like the New York cheesecake with blueberries and the carrot cake with cream cheese icing add to the caloric goodness. An old-school ambience with brass lamps, live jazz piano, and ever-attentive servers caps off Joe Fortes’ recipe for success.

VJ’s Drive Inn: Enjoy the old-school “Fat Boy” burgers laden with chili and pickles, plus crunchy fries, at the 1958-founded takeout joint in Winnipeg, steps away from the Fort Garry Hotel and the Canadian Museum for Human Rights.