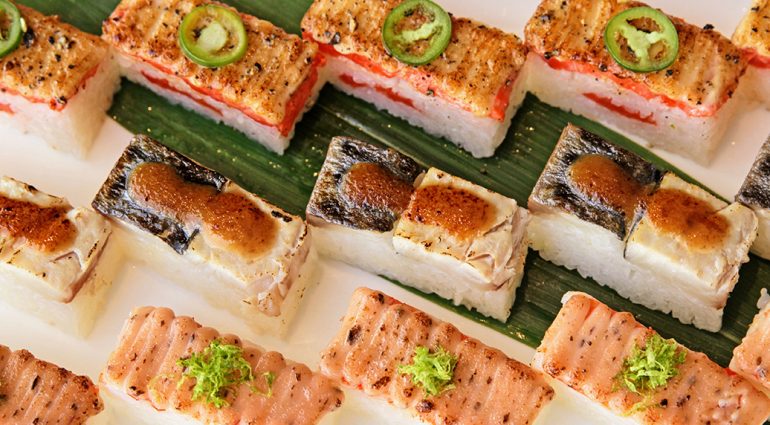 Vancouver residents are notorious for talking up their city’s great sushi and commitment to green policies. And yes, I’m one of those delightfully obnoxious raw fish fans who walks or runs almost everywhere.

For instance, I’ve fueled up for 10-km races on California Rolls in lieu of spaghetti. If I write about just-retired hockey scoring champions Daniel and Henrik Sedin of the Vancouver Canucks, I mention their favourite sushi options in upscale Yaletown.

To highlight just how much we British Columbia braggarts love to praise our beloved sushi, The Beaverton, a Canadian satirical news site, published an article entitled “Rest of country to Vancouver: We get it, you have good sushi.” Uh…sorry?

However, no apologies are required when consuming this signature Japanese cuisine in an environmentally friendly fashion. Who wouldn’t want to ensure we’ll have great sushi for generations to come? Here are five fabulous sustainable sushi restaurants in Vancouver.

At Blue Water Cafe, serving sustainable sushi is a genuine team effort. In 2005, the award-winning Yaletown seafood restaurant became a founding member of the Vancouver Aquarium’s Ocean Wise Program, which certifies that a restaurant’s seafood is “caught or farmed in a way that ensures the long-term health and stability of that species.”

The creativity of head chef Frank Pabst and sushi chef Masa Kudo manifests itself in artfully arranged dishes like the light and tangy tuna gomae (albacore tuna marinated with sesame seeds and soy), or the Tsunami (torched Pacific yellowtail with jalapenos and ginger), not to mention the generous portions of ultra-fresh sashimi (various types of raw fish). Wine director William Mulholland stocks sustainable and organic international wines in the 14,000-bottle wine cellar.

Dining this way, you can aim to make yourself into a lean, green, athletic machine, like the NHL players you may spot at nearby tables. Before departing, admire the aquatic-themed artwork on the brick walls, and buy a copy of Pabst’s Blue Water Cafe Seafood Cookbook.

It’s a culinary thrill to participate in the Japanese tradition of omakase, in which the chef picks the dishes. Seated windowside at the high white marble bar, I devoured the spicy tuna wrapped in cucumber with honzu sauce. It’s an ultra-refreshing, low-carb option. I also loved the Dragon Roll with barbecued sablefish, Dungeness crab, and avocado.

I washed it all down with a Kaiju cocktail, blending Cuban rum, lime and absinthe with a surprising touch of wasabi. I overheard a nearby fellow diner raving: “Without being all ridiculously superlative about it, this is some of the best sushi I’ve ever had!” And I felt like I was living up to the lobby pianist’s performance of “Love Yourself” – in a different sense than Justin Bieber intended.

The “Hapa Hour” (5-6 pm daily and 9 pm-closing Sunday to Thursday) is the best time to delve into the delicious offerings. In addition to beer and wine specials, you’ll find deals on house specialties like the Volcano Roll (chopped tuna, cucumber, tempura, and spicy chili sauce) and Avocado Taku Roll (yellow pickle, avocado, asparagus). Sit on high stools at the bar for prime people-watching.

One of my 2019 visits to Tsuki Sushi Bar was right after Finland won the IIHF World Junior Hockey Championship gold medal game, steps away at Rogers Arena. (The Finns eat lots of fish and have achieved some sustainable World Junior success with three titles in six years, so it felt fitting.)

This compact, 2012-opened joint on Abbott Street is both an Ocean Wise partner and a stellar choice for a value-priced feast. You can feed four people with a $42 party combo that includes California, Dynamite, BC, and spicy tuna rolls. Or load up on specialties like the yam roll topped with smoked salmon ($8.50) or the Red Dragon Roll with prawn tempura, avocado and spicy tuna ($12).

Miku’s longtime commitment to sustainable sushi shines with its Aburi dishes, a special style of flame-seared sushi it introduced in Canada.

Fun fact: Beyonce and Jay-Z dined in Miku’s private room in 2018. Presumably they want our planet to be a “Survivor,” without unethical sushi ranking among its “99 Problems.”

And if that didn’t get you craving some sustainable sushi, here are some snaps showing Vancouver’s finest rolls…