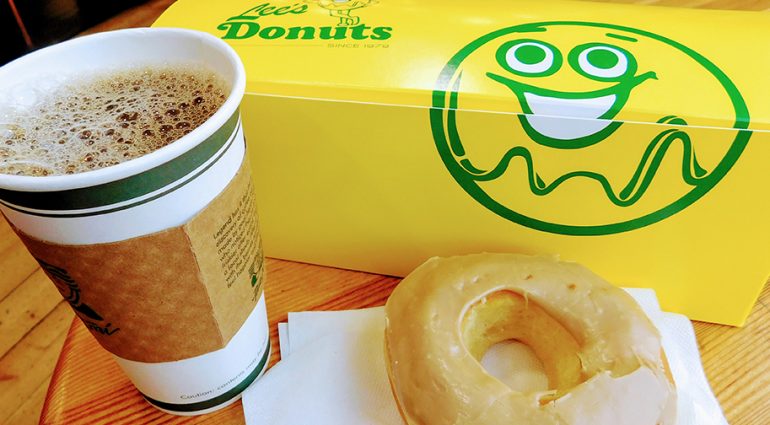 In the 1990’s, I got into double digits more than once with Tim Hortons doughnuts at the University of Victoria’s annual Week of Welcome barbecue for new students. (Granted, I was only new once, but I understood the value of volunteering.)

Nowadays, my taste for fried dough has gone gourmet. As a lifelong British Columbian, I can proudly state that both Victoria and Vancouver deliver the sweet goods.

Regardless, it’s time to devour the best doughnuts (you can see which side of that debate I’m on!) in Vancouver and Victoria.

At the recently renovated Cartems Donuts on Vancouver’s West Pender Street, I ogled my platter of doughnuts with gluttonous awe, trying to not actually drool.

A longtime employee, seated nearby on her coffee break, informed me: “The Earl Grey is a real treat. People come in here, say they don’t like doughnuts, and then hoover them down.” The lovely cake texture and light tea flavour, enhanced with rose petals, certainly explained that phenomenon.

Reportedly, honey parmesan doughnuts are a cult favourite, with people even calling in advance to reserve them.

Cartems Donuts sources ingredients sustainably within British Columbia, including organic tea from Cortes Island, flour from Chilliwack, and dairy from Burnaby. This 2013-opened location, with white walls and polished wood floors, is one of three in the city.

Lee’s Donuts celebrated its 40th anniversary in Vancouver in 2019. When I hit up the Granville Island Public Market institution, I couldn’t help thinking of Van Halen singer David Lee Roth, who famously barked in his “Yankee Rose” video: “Gimme a bottle of anything and a glazed doughnut to go!”

This indoor, family-owned food stall is named after creator Alan Lee, who passed away in 2014. His legacy lives on with the crowds who line up to buy his signature honey dip doughnuts. They’re made with whole eggs and fried in vegetable shortening, and sold in yellow boxes featuring a cheerful doughnut mascot.

I got a six-pack that also included other simple, delicious selections like jelly (made with local raspberry jam) and maple iced. I ate half of my purchase at a table by the market’s floor-to-ceiling windows, enjoying the views of False Creek and the Burrard Street Bridge. Party on!

Mercifully, my gym is just steps away from the downtown Thurlow Street outlet. That helps me burn off such acclaimed fat pills as the Lemon Meringue Bismarck, the Strawberry Buttermilk Old-Fashioned, and the Sourdoughnut. The latter, Canada’s first doughnut made with 100% naturally leavened sour dough, takes 48 hours to prepare. Vegan and gluten-friendly doughnuts are also available.

The coffee program is equally impressive, featuring ethically sourced, house-roasted coffee beans. 49th Parallel’s mission statement says: “We believe that for coffee to be sustainable, all practices along the supply chain must be taken into account.” The clean, sweet Epic Espresso is always a winner.

I grew up in Victoria near the Cook Street Village. It was home to the post office, two grocery stores, and lots of leafy chestnut trees. But it lacked a doughnut shop featuring toy robots, rocket illustrations, or Star Wars memorabilia, all of which would have indubitably enhanced my childhood.

My first Yonni’s experience was at the quirky Hotel Zed, which features a pink waterslide, complimentary skateboard rentals, and retro rotary telephones. I found a coupon in my room offering free deep-fried doughnut holes for dessert at their in-house diner. I dipped them in the accompanying hot chocolate, and relished how the consistency and flavour of the holes held strong with each sweet, sweet bite.

Duffin’s Donuts: At the 1987-founded, family-operated restaurant in East Vancouver, some 50 different types of value-priced doughnuts are available, ranging from jelly to Boston cream.

3 thoughts on “The Best Doughnuts in Vancouver and Victoria”