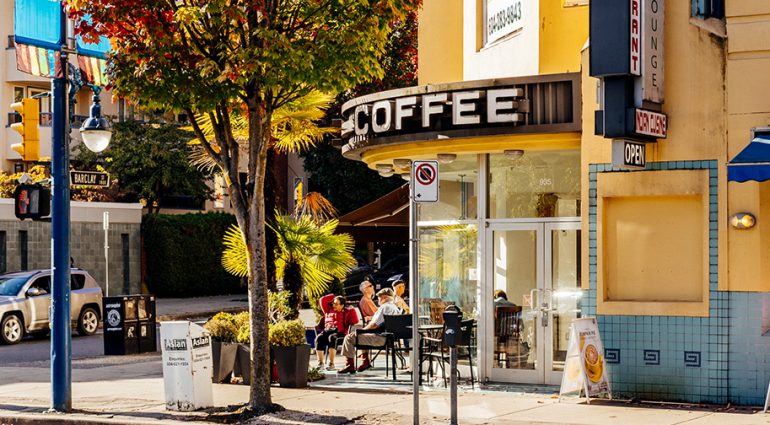 If you’re looking for a sure-fire way to spark an argument amongst normally peace-loving Vancouverites, ask them to name the city’s coolest neighbourhood. While hipsters love Yaletown and day-trip cruisers course through Gastown—the West End is a local favourite. “I grew up in a small community, so that ‘neighbourhood feel’ is important to me—and the West End has that, right in the middle of the city,” says Matthew Presidente, manager of Forage restaurant (read more below). “I’ve travelled around the world, and I still see the West End as a unique destination.”

Bordering Stanley Park and English Bay, the West End sits (naturally enough) west of downtown, stretching to Sunset Beach and encompassing Davie Village. It’s historically been a melting pot that brings together a wide range of the city’s ethnicities and income brackets. Here, you can explore under towering western hemlocks and Douglas firs, cycle along the wild Pacific coast, or walk a few minutes to shop and tuck into some of the freshest fare you’ll find anywhere—all in one relatively compact neighbourhood. Here are some of the West End’s best spots.

Forage is a lot of things—but it’s not pretentious. An unassuming spot attached to the Listel Hotel (itself under-the-radar cool, with guest room floors that feature hundreds of original sculptures and paintings), Forage is sleek when you enter, and soulful when the food arrives. With probably the best BC wine list in the province, featuring bottles that you won’t find anywhere else in the city, you’ll also find more than a dozen local craft brews on tap. Priding itself on its sustainable cuisine, the restaurant’s culinary staff has gone to great lengths to form close relationships with local fishermen, farmers and foragers (read: before it was trendy). Order salmon and tuna and halibut and duck, and bison butcher’s cut steaks, or gather all your friends and book a family-style dinner, where the chef selects the menu and serves up a huge, shared-plate meal.

The beating heart of Vancouver’s gay and lesbian community, this is the city’s best place to party. Located on Davie Street between Jervis and Burrard, take your Instagram photos while crossing the technicolour-rainbow crosswalk at Davie and Bute, and browse at surrounding bookstores and boutiques, which line the side streets. Browse vintages at Marquis Wine Cellars, which has offered a carefully curated collection of old and new world wines for more than 25 years (and frequently holds in-store tastings), earthy items and vintage clothing at The Attic, and books at Little Sister’s, an LGBT institution.

More than just a coffee shop, this stylish café set in a former corner grocery store, attracts a crowd of faithful regulars from the surrounding high-rise apartment buildings. Come for the homey feel and the coffee (the usual lattes and espressos here are joined by Australian flat whites and even a Vietnamese brew), then stay for their breakfast or lunch, which includes earthy options (like homemade granola) and modern comfort food (including truffle mac-and-cheese).

Stretch your legs and take a stroll along English Bay Beach, a popular hangout spot for locals. Here, you can walk or bike the seawall and, in winter, gather up your courage for the winter Polar Bear Swim. In adjacent Morton Park, check out A-Maze-ing Laughter. Built for the Vancouver Biennale, this is one of the city’s most unique (and recognizable) sculptures, 14 figures cast in bronze and portraying artist Yue Minjun himself, in the throes of hysterical laughter. Meant to inspire the same reaction in those who view it, a visit will at least put a smile on your face.

The main thoroughfare in the West End, Denman packs together a world of cultures and cuisines—stroll along just a few blocks, and you’ll walk from Asia to Europe to the Deep South, and beyond. Here you can try a local izakaya, Kingyo, with Japanese pub food like beef tongue, grilled on a stone, right at your table. Test out the tapas at España, which features happy hour offerings like chicharrones, or manchego cheese, or octopus on toast—all for just a few bucks a pop. Or try something with a southern accent like hush puppies and corn bread and ribs and brisket, smoked low and slow, at Buckstop (washed down with a root beer whisky sour, or maybe a brown butter bourbon Old Fashioned).

Running on Saturdays from spring through late October, this market sets up along Comox Street, next to Nelson Park. Browse a bounty of fresh food from some three-dozen sellers, offering everything from fingerling potatoes to fresh fish to meats and poultry. And lunch here transcends and exceeds the typical farmer’s market fare—stalls and food trucks offer artisanal crepes, fresh-baked macarons, steaming scones and some of the best samosas in the city.

Forming the entire northern border of the West End, Stanley Park—one of the world’s greatest urban parks—brings together the best of the Pacific Northwest. Covered in more than 400 hectares of temperate rainforest, Stanley is home to the Vancouver Aquarium, a tourist railway, totem poles, and is ringed by a seawall loved by joggers and cyclists year-round. From a hotel or restaurant in the neighbourhood, it’s an easy, coastal stroll to access all that the park has to offer, making it a must-visit if you’re in the West End.