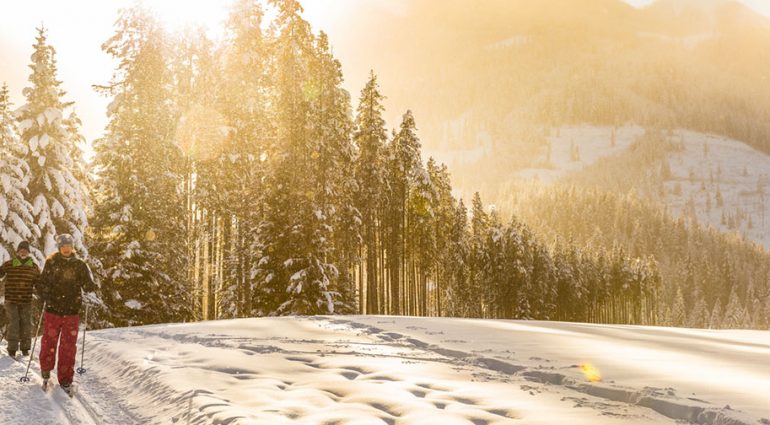 Fun fact: cross-country skiing has its roots in Scandinavia, where it was originally a way to hunt in the snowy landscapes of those Northern-European countries. Today, it’s much more leisurely, and yet there’s a whole world to explore on two skis. It involves gliding through magical woods, ambling along with no hurry in the world. You might cross paths with a darting chipmunk or two, or spot some bird high up in the trees, unafraid of what winter has thrown its way.

And as it turns out, some of the best cross-country skiing can be found just outside—and sometimes in—major cities, where the only hunting you’ll need to do is finding a spot to grab some grub after a day in the snow. Lucky for you, we’ve got that covered as well, so all you need to do is slap on some skis and glide your way across these gorgeous destinations in Canada.

Right in the heart of the city (a city that was named after the mountain), Mount Royal offers some excellent winter sports activities, with cross-country skiing chief among them. Les amis de la montagne offers lessons for adults ranging from classic technique to the more advanced “skating style”—but make sure to register early! Skiing on this little mountain oasis is pretty popular and fills up fast.

The best part about partaking in winter fun on Mount Royal? Some of the Montreal’s best bars, restaurants and cafés are within a stone’s throw in the city’s uber-famous Le Plateau neighborhood.

Get nice and warm with a ramen bowl at Yokato Yokabai, walking distance from the mountain. They’re the first ramen shop in the city to offer Tonkotsu pork bone broth, authentic to the Japan’s Hakata region. They pride themselves on their signature marrow preparation, which is simmered for 12 hours “to achieve a deep, creamy and full-bodied broth without MSG.”

Follow that up with a drink at Bily Kun, a bar serving Czech specialties with a twist: there are stuffed ostriches lining the walls. Nothing like having the world’s biggest bird staring you down as you’re knocking back a Czechvar premium Lager.

After you’ve appropriately waxed your cross-country skis, pack up those bad boys and a thermos of coffee and hop on the ferry to Ward’s Island for some urban skiing. The islands become a beautiful and quiet place to explore in the wintertime. It’s also pretty cool to watch the ferry crush through ice as it makes its way across Toronto’s Inner Harbour. There are plenty of open spaces to explore on the island, and the flat terrain is perfect for beginners.

For a little après-ski cocktail drop into Char Five on Lower Simcoe Street in the Delta Hotel. Classy and welcoming, it’s the perfect spot to relax those sore muscles while nursing a whiskey selected from their extensive array of single-malts from all over the world. They also have some of the best whiskey-infused cocktails in the city. Tip: get the Sazerac – it’s a great drink to wash down a few jalapeno smokie corn dog appetizers.

Think about it, is there a better place in the entire country than the Prairies for cross-country skiing? The endless plains of Canada’s great middle-lands has a special place in our hearts and is tailor-made for the sport.

Located about an hour’s drive north of Saskatoon, Eb’s Trails offers an extraordinary cross-country ski experience with 52 kilometers of groomed trails winding through rolling forested terrain. The varied trail system, groomed by the dedicated volunteers of the Saskatoon Nordic Ski Club, allows skiers of all ages and abilities to have a wonderful experience.

When you’re done, head into town for Cajun and Creole fare. Bontemps Café’s Mussels Diablo are delish: Piquant mussels tossed in garlic, habanero salsa, white wine, and creole sauce, with baguette. If your sweet tooth is acting up, Saskatoon has one of our favourite chocolate shops in Canada.

Lastly, we head out west. The type of skiing that comes to mind when one mentions our most western province is definitely not the cross-country variety, but that doesn’t mean there aren’t some mean trails to attack. In West Vancouver you’ll find some amazing paths at Cypress Mountain on Hollyburn Ridge. With more than 19 km of groomed trails and track—7.5 km of those lit for night skiing—this place is the perfect spot for skiers of all levels and ages.

After a long, magical day of gliding amongst snow-covered trees, head into Vancouver proper for some of the best seafood and sushi in the province. It isn’t your traditional comfort food après-ski fare, but we think it’s worth giving a shot. At the Lobby Lounge RawBar in the Fairmont Pacific Rim, you’ll encounter incredible (and sustainable) Japanese fare.

As far as straight sushi options go at this 100 percent Ocean Wise-compliant spot, the sashimi kampachi yellow tail is particularly tasty. If you want something with a little more protein, the wagyu beef teriyaki rolls, with asparagus, Japanese leek, cucumber, micro greens and mayo, are melt-in-your-mouth material.

So, whether it’s an urban ski jaunt in Montreal, a West Coast excursion on the outskirts of Vancouver, or a cross-country adventure somewhere in between, numerous are the places to explore for an après-ski cocktail or a hearty meal to end the day in style.

One thought on “Après-Ski: Cross-Country Skiing and Dining Out in Canada”