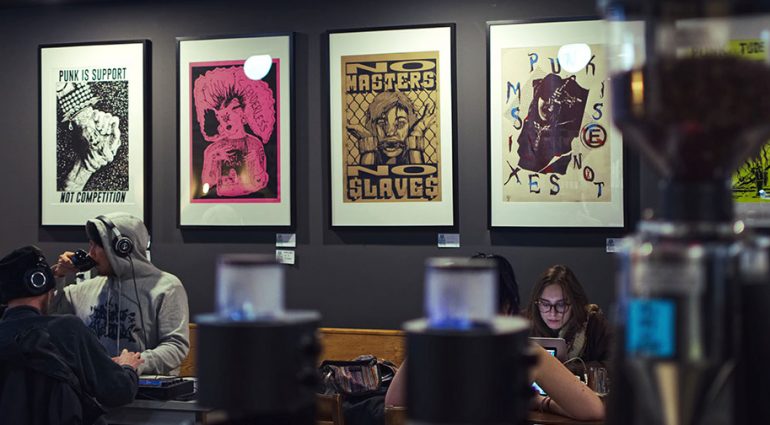 Every city has its easy-to-find, touristy spots to visit, but getting to the heart of a city or town is more difficult and takes a little more digging – or a local to help you out. Edmonton is full of amazing attractions, from Rogers Place to the Alberta Legislature,  but there are hidden gems in its vibrant communities which tell a different story. These four Edmonton hot-spots, obscured by a remote urban location or a lack of social media presence, remain respected amongst locals who speak of them with a loyal high regard, quietly helping shape the city’s grassroots identity.

Tucked away in a corner of the east side neighbourhood of Bonnie Doon is the unassuming convenience store Ralph’s Handi Mart. At first glance it might seem like the only reason to go to Ralph’s would be for the usual quart of milk and bag of chips, but Ralph’s is secretly the location of what many Edmontonians refer to as the city’s best fried chicken—by far.

“I have zero social media imprint,” says Wally Saleh, who co-owns Ralph’s with his brother-in-law Sammy. “The only time anybody brings up social media is when they’ve looked up our Google reviews, which are ‘obscenely’ high.”

Wally’s father Hussain purchased Ralph’s in 1986 and was, as Wally sarcastically puts it, “too cheap to change the sign, although he did make some changes to the [fried chicken] recipe,” Wally says over the phone during a mid-afternoon rush, its hustle-and-bustle audible on the other end of the line. “We’ve just been continuing that ever since.”

Since Ralph’s Handi Mart is primarily grab-and-go, locals typically enjoy their chicken outside during summer months, in the picturesque baseball diamond next to Gabrielle-Roy Public School across the street.

In a non-descript part of Downtown, you’ll find The Grizzlar, Edmonton’s most clandestine café and coffee roastery, which moonlights as an art gallery, music venue, and a socio-political enterprise helmed by dynamic “mom-and-pop” duo Susie and Drew McIntosh.

“We’re located on the north edge of downtown,” Drew explains, “just past MacEwan University between 104th Avenue and 107th Avenue where there’s literally nothing.”

McIntosh isn’t exaggerating: aside from the odd vacant lot, liquor store, and buildings that, according to McIntosh, “have been shuttered forever,” The Grizzlar is tucked away in a part of town that “actually needed something.”

The Grizzlar embraces its role as what McIntosh refers to as a “social business.” “You can’t sell coffee without expecting people to have conversations, and get to know each other,” he elaborates. “That’s in my view what the basis of making art is all about. It’s more than just painting a picture, or writing a song, but about being able to express yourself and understand other people’s ideas and expressions as well.”

A massive woodcut of the Edmonton Oilers winning the Stanley Cup in the 1989-1990 season hangs on the wall of Dallas Pizza. Located in the off-the-beaten-path east-Edmonton neighbourhood of Forest Heights, Dallas Pizza is far removed from any public transit hub and the downtown lights flicker only faintly in the distance. Since 1980, the Forest Heights staple has remained true to its original recipes, ingredients and allegiance to its community, as it has for over 40 years.

“He had so much pride in the restaurant,” recalls current owner Anastasia Deligianis, speaking of her father Dennis who opened Dallas Pizza in a time where—according to Anastasia—customers valued authentic human connection between a business owner and their clientele. These customers’ stories are preserved in time, much like the Oilers woodcut that hangs on the wall. “People come in and still say ‘I remember your dad: whenever we came in here, he would sit down and talk with us.’ And it’s not just one or two people who tell that story. It’s so many.”

For the more outdoorsy members of Dallas Pizza’s customer base, Edmonton’s river valley is only one short block north of the restaurant, allowing access to over 160 kilometres of trail systems along the banks of the North Saskatchewan River.

Tucked away next to the LRT’s downtown Bay Station stop is the short and much-overlooked side street of 104th and Jasper. At first glance, the red brick-laden lane might seem better suited in Montreal neighbourhoods like Mile End or the Plateau. Overshadowed by the mid-day traffic and fuss of Jasper Avenue’s professional population, the 200-yard stretch of 104th Street feels like a sheltered, welcome relief.

With its share of coffee shops and restaurants, including Tzin Wine and Tapas featuring one of the city’s best wine lists and tapas menus, 104th Street and Jasper is one of downtown’s most peaceful alcoves amidst an otherwise towering urban environment. In the summer, the street blossoms, covered and flanked with trees and punctuated by the sunlight of the long northern Alberta days inching through cracks between the buildings.

Edmonton’s most gleaming treasure troves might be buried, but they remain treasures nonetheless. That feeling of discovery in one of Canada’s most vibrant and engaging cities goes hand-in-hand with enjoying everything these unique Edmonton landmarks have to offer.