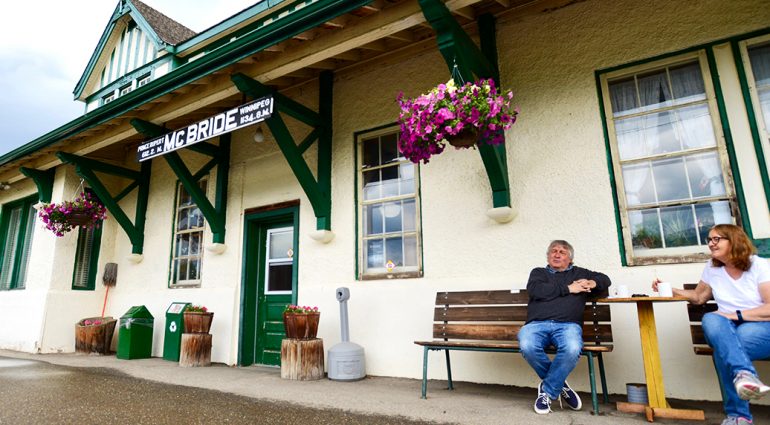 Nestled in front of British Columbia’s Cariboo Mountains and a tractor ride away from the province’s longest and most important salmon river, there’s a cornflower blue building. This is where farmers from the nearby Robson Valley region can pick up groceries, order their livestock feed and mail a letter, all in the same shop. The Dunster General Store is situated 140 kilometres or so west of Jasper National Park and 270 km southeast of Prince George, in “downtown” Dunster, B.C.

A visit to the area is a chance to step back in time to a period when homesteaders toiled a hardscrabble existence, much of western Canada was still an unknown frontier and the railway was settlers’ only link to the outside world. It’s also a place to get a really good sausage roll.

On a weekend in June, my three-year-old daughter and I stepped aboard the VIA Rail passenger train to experience the ride from my hometown of Jasper to Dunster. The journey would take us over the continental divide, alongside turquoise mountain lakes and rivers and give us a long look at mighty Mount Robson, the highest peak in the Canadian Rockies.

The historic railway station in Jasper is a pretty quiet place until the train chugs into view. But even when the passengers are pouring on and off the train, to label the once-a-day bustle as “busy” would be laughable to your average Torontonian. Then, as it proceeds to roll out of town to the west, the silver locomotive and its three-carriage cargo canters into the Miette Valley, an area so thick with black and grizzly bears that Parks Canada recently instituted a 12 kilometre no-stopping zone to ensure motorists on the Yellowhead Highway aren’t rubber-necking wildlife and getting into accidents.

The nicest part of train travel, I’m learning quickly, is that rubber-necking is not only allowed, but encouraged. My daughter Cora and I peer into the lush river valley, keeping our eyes peeled for wildlife. When she spots a beaver smacking its tail in a silty eddy on the Fraser River, she’s reminded of the care package she received as a newly minted member of VIA’s Choo Choo Club. Our next 20 minutes are thus spent applying temporary tattoos, and soon she’s sporting a half-sleeve that includes a cartoon beaver, moose, fox and bear. Her first ink. How sweet.

Speaking of sweet, we’re a week or so early for the sweetest celebration this side of Moose Lake, the Dunster Ice Cream Social, an annual event held not far from the General Store. This year’s incarnation will once again have all the ice cream, pies, cookies and brownies its patrons can eat, all for the adorable price of $8 and $6, for adults and kids respectively.

Dunster isn’t a town—there is no main street, no residential neighbourhoods. But it is a community. The region’s residents live on farms or ranches. The industry is a mix of agriculture and forestry.

Artists have also found a home here, however, and at the annual Robson Valley Music Festival, tiny Dunster (pop. 75) opens its arms to the world. The RVMF (in August) is an incredible, three-day celebration of music, art and community taking place on a two-acre spread next to the Fraser River. The family-friendly event brings artists from all over the world to share their talents amongst a beautiful blend of cowboy culture and hippie heritage. I can’t wait to pack up the camper van and head out later this summer.

But for now, Cora and I are looking up at the summit of 3,954 metre Mount Robson, a view that isn’t always afforded to visitors for the constantly swirling clouds atop the Canadian Rockies’ highest peak.

Even though they’re less than 100 km apart on the same latitude, the Robson Valley is significantly more lush than Jasper, owing mainly to the warm, wet air masses that build off of massive Kinbasket Lake to the south and which break up as they head east over the spine of the Rockies. Not far from where the train crosses over the provincial border heading west, cedar forests start to spring up and biodiversity blossoms.

It’s partly for the region’s generous growing conditions that the farmer’s market in McBride, a community 45 minutes up the track from Dunster, is an amazing place to find fresh fruit and vegetables. Even in the spring, when our garden at home is barely sprouting, the Robson Valley growers are pulling up juicy carrots and gorgeous garlic. As such, a couple times each summer, my wife and I will pack up the van and hit the highway for McBride, tagging on a stop at the Beanery 2 Bistro in the village’s heritage train station for one of Donna and Andy’s famous sandwiches. Sure, 160 kilometres seems like a long way to go to get groceries and lunch, but we justify the trip as a mini-vacation, a chance to get away from the hustle of touristy Jasper and an opportunity to rejuvenate our spirits with a bit of country living.

And that’s the essence of our train trip, too. Dunster isn’t necessarily on the list of every visitor coming to Jasper to explore the Rockies, but the experience is perfect for those who like beautiful scenery, friendly folks and a chance to take things a little slower.

Robson Valley and the surrounding region in pictures…