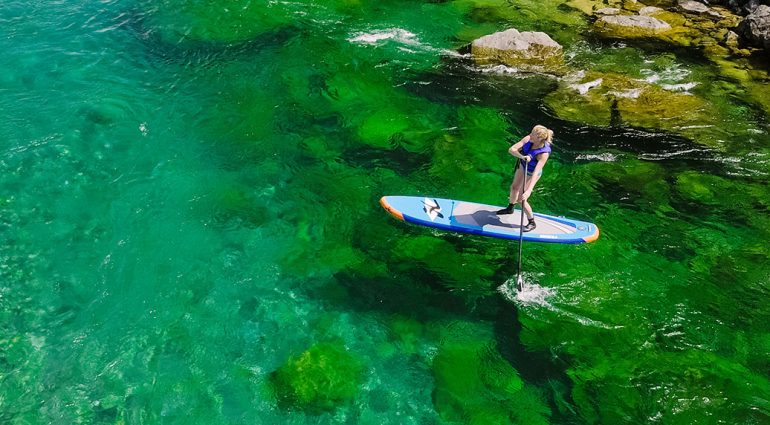 Gaspésie is famous for its striking landscapes: Percé Rock, the sea extending out to the horizon, the beaches, crystalline rivers and imposing mountains—breathtaking views are around every corner.

But there’s more to Gaspésie than meets the eye! It’s a bustling and growing region with an abundance of cultural attractions, outdoor activities and culinary can’t-misses. Plus, you’ll enjoy a warm welcome from the region’s famously hospitable residents. Sixteen years ago, I myself decided to leave the big city and move from Montréal to the enticing city of Carleton-sur-Mer.

This summer, VIA Rail passengers will once again be able to access the southern coast of Gaspésie thanks to a shuttle running from Campbellton, NB to Gaspé, QC (for details and departure times, see the bottom of this article). Here are four fantastic vacation destinations along the route:

After a 55-minute shuttle ride, I invite you to disembark in Carleton-sur-Mer. There, you’ll find plenty of accommodation options—including floating yurts*!—and a number of attractions within walking distance of the shuttle stop (at the time of writing, my city has no taxis). Écovoile* maritime excursions will take you out to explore the salty waters of Baie des Chaleurs—a member of the Most Beautiful Bays in the World Club—and the municipal beach I love going to.

Back on land, head 555 metres up to catch the view from Mont Saint-Joseph*. From mid‑July to the end of August, a twice-daily shuttle carries visitors from the municipal beach to the summit. At the top, you’ll find a lookout point, a network of hiking trails and a gorgeous chapel. Beginning at the end of July, the chapel will host a digitally animated visual show.

Hungry? Downtown Carleton-sur-Mer has plenty of tasty options. Chope-sur-Mer* (gourmet market) offers a vast array of local delicacies, microbrewed beers and its signature homemade pretzels. Fresh bread and exquisite pastries can be found at La Mie véritable*, including a delectable berry charlotte. And if you’re hankering for a latte, just follow the tantalizing scent of coffee to Brûlerie du Quai. In the evening, the city comes to life, with shows at Le Naufrageur (microbrewery), Quai des arts (with Maximum 90* and Théâtre À tour de rôle), the marina, and even storytales on the beach* near the lighthouse (a 5 kilometre bike ride from the shuttle stop).

In the heart of Bonaventure, you’ll find the Musée acadien du Québec, which recounts the fascinating history of the region’s Acadian population. Foodies will be delighted by the local stores and restaurants, including fine grocer Le Vert Pistache and artisanal bakery La Pétrie*. A stroll along a paved seaside boardwalk will lead you to Beaubassin, where its namesake beach beckons you to take a dip in the Baie des Chaleurs. You can also take a walk near the marina, sample the local cuisine at Café Acadien* or catch a show at Théâtre de la Petite Marée, a favourite of my daughters’.

Cime Aventures and the Bioparc (accessible by taxi) are also sure to be a hit with families. At Cime Aventures, guests can rent watercraft and head down the crystalline Bonaventure River, which is home to salmon pools. The site also has a restaurant with patio where you can catch a show and accommodations in the heart of nature. At the Bioparc, you can observe around 40 native animal species in an environment that mimics their natural habitats.

Ah, Percé Rock! Sixteen years of living in Gaspésie have yet to diminish the sense of wonder I feel every time I visit. A beautiful promenade and observation tower built as part of a littoral protection and rehabilitation project provide a stunning view from the mainland. At the Percé UNESCO Global Geopark, you can take in the view from above on a zip line with a glass platform perched on the mountainside. The Geopark also offers trails and a welcome centre (a blessing in gloomy weather!) with an engaging multimedia experience and a cosmic playground.

Parc national de l’Île-Bonaventure-et-du-Rocher-Percé is a must-see in Percé. Park visitors can take to the water on a cruise around Percé Rock before landing on Bonaventure Island, where a colony of 116,000 northern gannets roosts—the most accessible northern gannet population in the world. Smoked salmon is a Percé specialty, and can be found at Fumoir Monsieur Émile* (lauded by chef Jérôme Ferrer), Fumoir Le Paternel and the shop Atkins et Frères. Most attractions, hotels, restaurants and stores are in the heart of the town and accessible on foot (you won’t find a taxi in Percé).

In downtown Gaspé, you can take a walk along Promenade Jacques-Cartier, bordering the magnificent Baie de Gaspé. It links up with the site of the Birthplace of Canada, where visitors will find heritage buildings and a multimedia show, as well as Musée de la Gaspésie, home to exhibits and an immersive virtual reality experience that will send you out to sea on a trip with Gaspesian fishermen.

Also downtown, La Reine street is a pleasant place to meander and sample the local cuisine. You will find the charming Café des Artistes and Bistro-Bar Le Brise-Bise, where you can discover local musical talent in the evenings, as well as the Marché des saveurs gaspésiennes. Grand Gaspé (accessible by taxi or via the RÉGÎM) also has sandy beaches, including Haldimand Beach, and Forillon National Park, with breathtaking views of the ocean, cliffs and forest. You can also find hiking trails, heritage buildings and “ready to camp” accommodations.

The Campbellton (NB) to Gaspé shuttle is in operation until September 2, 2019. Tickets for both short- and long-distance trips on this line must be purchased through VIA Rail before boarding. The schedule may vary depending on the train’s time of arrival. One bike per passenger may also be transported for a fee.

Unless otherwise indicated, transportation on bus lines managed by the Régie intermunicipale de transport Gaspésie–Îles-de-la-Madeleine (RÉGÎM) are accessible with or without a reservation. See the website for more details and to view all stops. Most RÉGÎM vehicles are equipped with a bike rack that can hold up to two bikes. There is no additional fee to transport a bike.

Carleton-sur-Mer to Bonaventure: line 40 of the RÉGÎM bus network Monday through Friday (four departures daily) or the shuttle, 7:55 a.m. on Thursdays, Saturdays and Mondays.

Bonaventure to Percé: Shuttle at 9:00 a.m. on Thursdays, Saturdays and Mondays or combine RÉGÎM bus lines 40 (departure at 12:49 p.m.), 32 (reserve a ticket one day in advance) and 31, Monday through Friday.

Percé to Gaspé: RÉGÎM bus line 22 at 6:43 a.m. Monday through Friday (option to transfer to line 21 toward Forillon National Park at 8:35 with a reservation at least one day in advance) or shuttle at 11:23 a.m. on Thursdays, Saturdays and Mondays.

Gaspé to Campbellton: Shuttle at 3:30 p.m. Wednesdays, Fridays and Sundays; arrive at Campbellton Station at 10:00 p.m. local time to transfer to the train.