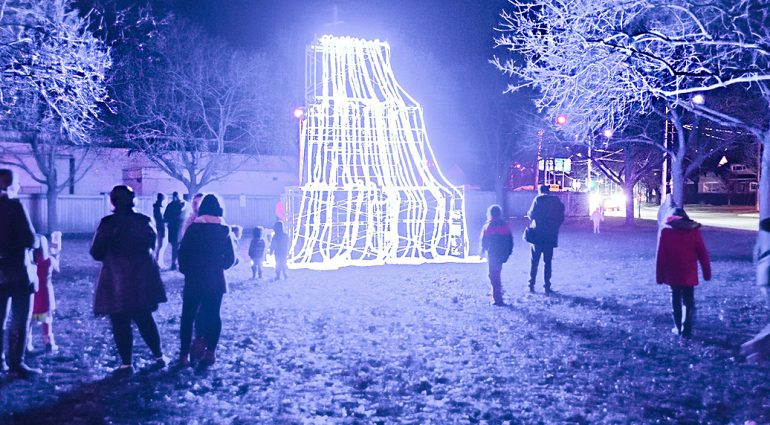 So many of the popular things to do in Hamilton—from the annual Supercrawl street party to the Festival of Friends carnival in Gage Park—are primarily summertime activities. But the city hardly goes into hibernation mode come wintertime.

Once the surrounding Niagara escarpment gets covered in snow, the city that wields the tough nickname of The Hammer starts to resemble a cozy ski village (albeit without the chairlifts and snowboard bros). And with it comes copious options for both daytime adventures and nighttime revelry—of the indoor and outdoor varieties.

From spring to autumn, the Pier 8 waterfront park is the site of Hamilton’s most resplendent roller rink, where skaters bounce, rock, and roll to disco classics while taking in gorgeous sunset views of the harbour. And the action doesn’t stop in the winter—you just need to swap out the wheels for blades as the rink gets covered in ice for free all-day skating.

Each February, Pier 8 also serves as the epicentre of Winterfest, a citywide celebration that includes a waterfront night market showcasing local shops, food vendors, and artists.

If skating feels too amateur-hour for a winter warrior like yourself, then maybe pick-axing your way up an ice-covered gorge is more your speed? Once the temperature dips below zero, Hamilton’s famous waterfalls transform into dazzling frozen panoramas, and in the case of the popular Tiffany Falls, climbers can actually scale its 21-metre face. If this sounds like, ahem, a cool thing to do, you must either be a member of the Alpine Club of Canada or enroll yourself in an ice-climbing class with OneAxe Pursuits. Or you could always just Instagram it from a safe distance.

Want to get into the wintry spirit without dealing with the sub-zero temperatures? Starting in November, the Royal Botanical Gardens compound becomes a bustling holiday hub that hosts musical performances, magic shows and comedians.

No holiday season in Hamilton is complete without taking in some Christmas-movie classics at the castle-like Zoetic Theatre. Their interactive screenings of yuletide favourites like Elf and The Polar Express are sort of like the family-friendly versions of those fabled Rocky Horror Picture Show soirees.

HOLIDAYS IN THE HAMMER

Gore Park is the heart of Hamilton—a triangular promenade that runs alongside the busy King Street corridor. In recent years, it’s been subject to a multi-phase redevelopment that’s seen it add the Veteran Place’s war memorial and vibrant multi-colored pillars displaying song lyrics from famous Hamilton musicians like Stan Rogers and the Arkells.

At the start of each December, the park is lit up by a massive Christmas tree that towers above its iconic water fountain, while free fairground rides transform the surrounding space into a mini-amusement park. It’s the best place to visit in Hamilton when you want to pretend you’re living in a Frank Capra film.

At the end of the month, Hamilton welcomes the evening arrival of the CP Holiday Train, which rolls through Gage Park in all its glow-in-the-dark splendor with a popular musical act in tow, to collect donations for local food banks.

As the old saying goes, time flies when you’re having fun—and with all the wintertime attractions Hamilton has to offer, it’ll be spring before you know it.