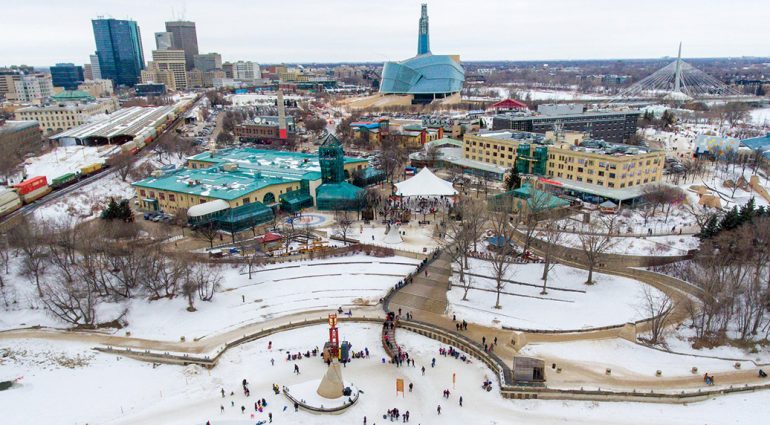 And you do so at The Forks, Winnipeg’s winter epicenter.

Here, mountains are replaced by chic ice surfaces, while a ski lodge gives way to a market made from a converted, circa 1880s saddlery and railyard that has been reimagined by the city’s Number TEN Architectural Group.

While Winnipeg’s frigid winters were once a deterrent for tourists, they are now continually celebrated by the likes of the NY Times, LA Times and countless architecture and design publications.

The common thread in these articles is the creativity on display, as Winnipeggers have become adept at turning winter into an artistic medium.

This is best embodied on The Red River Mutual Trail, Winnipeg’s main public skating surface which snakes out from The Forks harbour along the Red and Assiniboine Rivers (skate rentals are available in the Forks Market).

No matter where you head out on the trail you’ll encounter otherworldly, whimsical and simply spectacular warming huts that have been designed by celebrated architects and designers. These huts have been hitting the ice for ten years now, with an international competition taking place for the last nine years to see whose wacky and thought-provoking works will be accepted (along with a few invited design submissions). Past huts included an ice block archway called Stackhouse by Sir Anish Kapoor (of Chicago’s Cloud Gate fame) and another that looked like an Interstellar version of an igloo called FIVE-HOLE by Frank Gehry (who designed Spain’s Guggenheim Museum).

This year, The Forks has had 219 design submissions (a new record for them), including several from countries that don’t even experience winter – let alone regular stints in -20 C – like Syria. (And yes, warming huts is a misnomer for sure, as providing warmth outside of protection from the wind is not their forte, although surely you can take some selfies beside them that will set fire to the “like” button on your Instagram account).

If the idea of skating on top of a frozen river makes you apprehensive, The Forks also has over 1 km of on land trails. This section is particularly magical at night, as one route will take you over a bridge before guiding you underneath an archway of lights to a small hockey rink that sits right in front of the new WINNIPEG sign, with the Canadian Museum for Human Rights towering over top. Needless to say, the whole scene is peak Canadiana.

Once you leave the ice, you don’t have far to go to warm up, as The Forks Market is just steps from the harbour. (As well, for those of you arriving to Winnipeg on a VIA Rail train, Union Station is literally 200 steps from The Forks Market #bonus).

The focal point of the Forks Market is The Common, a bar which offers wine and beer by glass, pint or flight (served on Manitoba-shaped boards by Huron Woodwork). It offers a mix of interesting vintages and draft (always including five local brews), that have been curated by the world’s second-best sommelier, Véronique Rivest.

What to eat in The Forks

Surrounding it, taking up residence in the rounded former horse stables, are food kiosks from some of Winnipeg’s most-popular restaurants. Don’t miss Empanadas and Company by Simon’s Cuisine, where Tucumán Argentina’s José Strum prepares a steak sandwich called The Gaucho – featuring tenderloin, chimichurri, horseradish mayo, and a cracked egg on top – that’s so tender you don’t even need teeth. José’s claim to fame, as the name should indicate, is of course empanadas, and his spinach and ricotta variety is sheer bliss.

Then there’s the Red Ember Common, the legendary farm-to-table food truck’s outlet where a white marble bar wraps around the Izzo Forni oven. The spot is Franco Pepe-approved, who foodies will recognize from the pizza episode of Ugly Delicious on Netflix –  and the setup gives everyone the opportunity to sip wine while watching their crusty yet chewy pies come to fruition in under two minutes.

Right beside the Red Ember is Passero, by consistent five-star Winnipeg chef Scott Bagshaw. Its dining room looks right out into the main part of the Market through ribs of wood, allowing you to watch people pass by with skates dangling from hockey sticks as you skewer pieces of octopus tentacle from a plate radiating with colour from squid ink romesco, nduja and white radish. Get whatever pasta your server tells you to, particularly anything involving black garlic or a chili sauce, along with beef tartare (a Bagshaw specialty).

The whole bottom floor of the Market (excluding the mighty fine Ellement Wine + Spirits, which has a great selection of natural and unique bottles) is covered under one liquor license. This means you can walk around freely with your drinks – even stepping into stores to shop – a first in Canada.

So even if you don’t want to do winter, there’s still the option of shopping with a glass of wine in hand. How’s that for chill?