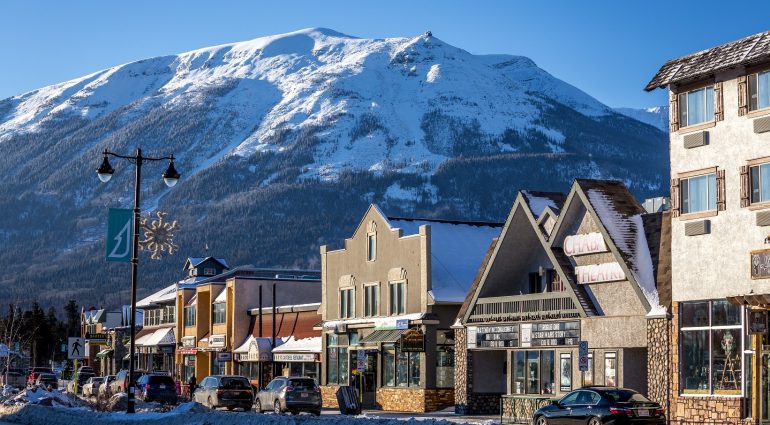 It may seem that Jasper’s the sort of two-street town built for people to pass through, a staging ground for other, more exciting things. The question of what to do around Jasper and Jasper National Park is a no-brainer, especially now that entry to the national park in which Jasper sits is free for Canada 150. And there’s every manner of adventure tourism and extreme sport known to humanity within an hour of the train station.

What to do in Jasper itself, though, is a subtler question with surprisingly satisfying answers.

Before the tour companies came, with their hikes and helicopters showcasing the area’s sublime setting, Jasper was a railroad town, where ties were milled, tracks built, and rolling stock maintained. But before that, for centuries (at least), the land now settled as Jasper was an in-between place, where Beaver, Woodland Cree, and Sekani people would pass through. It was land that was claimed by no one, a buffer zone, as the Jasper Yellowhead Museum on the edge of town calls it.

A Jasper State of Mind

Oliver Andrew, 28, has lived in Jasper his whole life, as his father did, after his great-grandfather moved from the tiny Greek mountain town of Stemnitsa and opened the Astoria Hotel in 1924, still there on Connaught Street, where you can watch for VIA’s Canadian through the windows of the front-facing rooms.

The rhythms Andrew describes makes the place seem like a tidal pool, with its ebbs and flows throughout the day, the week, the year. Day shifts for the souvenir shops and cafes, evening for the bars and restaurants, night shifts for the hoteliers and after-work drinks at the Dead Dog (Astoria’s house bar).

Then there’s Sin Sundays at the Atha-B night club at the other old hotel in town, the Athabasca. That’s when locals like Andrew and his cousin, Socrates Korogonas, get together with the almost-locals, like Sam, one of the bartenders at the Brewery. Sin Sundays have been going on here for 50 years.

In Jasper, everyone has a story. Socrates opened up the Jasper Brewing Co. with some friends after winning one of those hospital house lotteries. Sam is not only a bartender but also part-time teacher – in between his mountain climbs.

Connaught is where you enter the city, where the train station is, and most of souvenir shops. But it’s also where Jasper leaves the tourist-town script behind. I have spent entire evenings in Toronto searching in vain for a decent aviation, a simple cocktail made of gin, crème de violette, and maraschino liqueur. 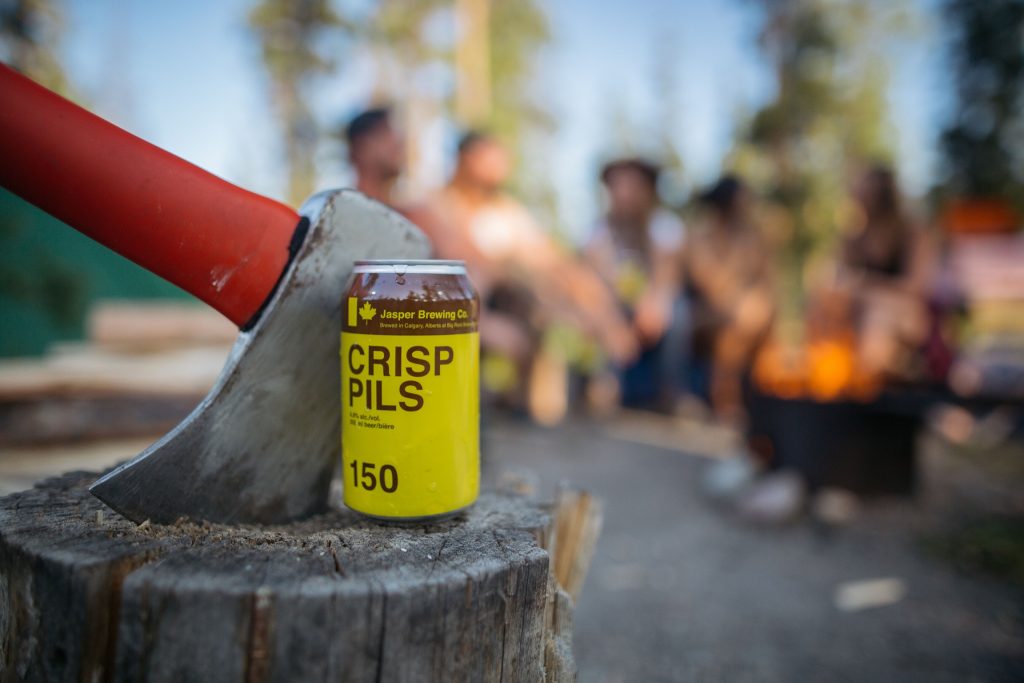 At the Downstream, it’s not a problem. They even make it with Alberta’s Eau Claire’s Parlor Gin. A couple of doors down is Jasper Brewing Co. (Socrates’ place), which this year put out a beer for wide release. The Crisp Pils is a decent brew in a superb can designed by Leah Schwantz as a sesquicentennial homage to those brown and yellow national park signs from the 70s and 80s.

Bike Up to the Lake

Jasper breakfasts are big, engineered for people setting off on expeditions, so post-breakfast would be a good time to rent a bike. They seem to have the widest range at Source for Sports, where I got mine. From there, cycle the six or so kilometres up to Pyramid Lake. There’s a resort there, but if you head 1km farther, you’ll find Pyramid Island, recently landscaped to make every bench and nook on the tiny spot seem utterly remote. Cross the bridge and sit for a while; watch for loons. 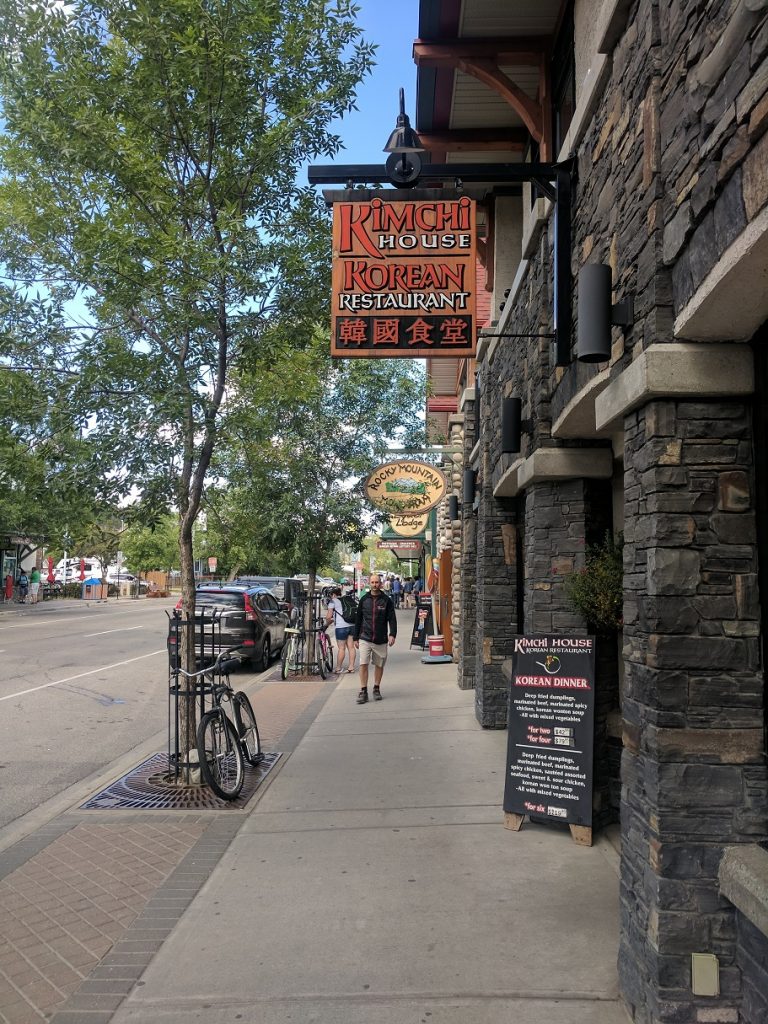 Though the business backbone of Jasper is of Greek extraction (Andrew was once “Andrutsanos”), there’s a Korean community, too. “Grandpa” Sam Cheon runs one of the Connaught souvenir shops, and the best restaurant in town is the Kimchi House on Patricia, Jasper’s other main street. Their kimchi jiggae, the cabbage well aged, could stand up with the best of them.

If you’re taking a Canada 150 trip across the country, especially if you start in Toronto, you might reasonably have some laundry by the time you get to Jasper. You can get the one of the best cups of coffee in town at the Snowdome Café and Coin Clean Laundry. Or, if you’ve filled up your travel journal, or run out of ink, you could go to Three Sheets, Jasper’s laundry-stationery combo.

Honour, Valour, and Keeping The Peace

No celebration of Canada would be complete without raising a drink to our armed forces. As it happens, one of the best places in town to do so is The Stand Easy, the local legion hall bar. The walls are hung with framed pictures of helicopter gunners and the like. There’s a Gunner Burger and Navigator Nachos on the menu, with a jar of salty cheese and another of pickled eggs on the bar, just in front of a fridge with a whiteboard that keeps track of champion pickled-egg eaters. Josh tops the list at 23; Kayla’s current record is 18.

Who says there are no Canadian heroes?