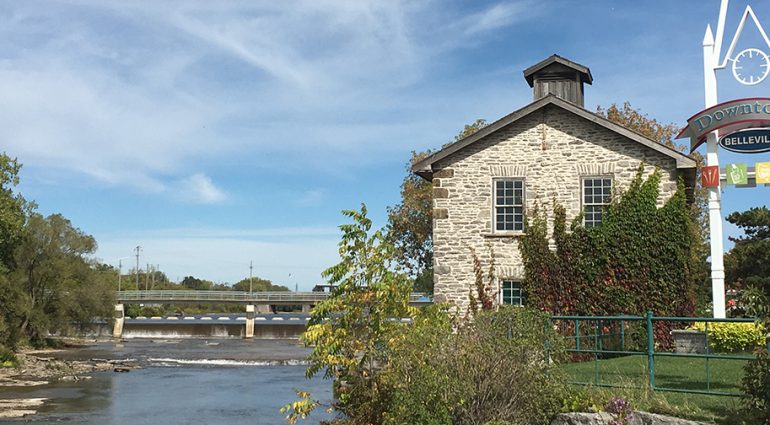 Sitting at the edge of the Bay of Quinte, a stone’s throw from renowned Prince Edward County, is charming Belleville, Ontario. When the now-defunct Grand Trunk Railroad was completed in 1856, this once-sleepy town along the Moira River began thriving as a lumber and farming industry hub. Over a century and a half later, while Belleville has retained some of its heritage, you’ll now find excellent restaurants and cafés, thriving arts and cool new small businesses. With a younger generation escaping city life and setting up shop in Belleville, so come the winds of change. And it contrasts well with the region’s rich history and blue-collar grit. Think Arcade Fire meets Stan Rogers.

While one can easily explore Belleville on foot, renting a bike (when weather permits) at Ideal Bike or Doug’s is the key to getting the most out of your visit (make sure to reserve ahead of time). There’s also the option to bring your own bike on board the train.

Belleville’s crown jewel and most iconic landmark is the Glanmore National Historic Site. This stately home-turned-museum is a bastion of the city’s—and the whole region’s—rich history. Its architecture is a quintessential example of the 19th century’s Second Empire style and its numerous rooms are filled top to bottom with relics and artifacts of the time, more than 20,000 of them. The décor is so regal and charmingly over-the-top that you’d think you’re walking through a scene from Downton Abbey.

Built for a wealthy local banker in 1883, four generations of the family resided at Glanmore before it was purchased in 1971 and restored to serve as Belleville’s Community Museum. Fun fact: it houses one of the most extraordinary collections of Victorian dog and animal paintings in the world, which alone is worth the visit.

Eating out in Belleville

More cultured but on the verge of becoming hangry, we headed into town in search of a meal. Walking down Front Street—Belleville’s main drag—we noticed a café bustling with activity. L’auberge de France is a French-style restaurant and café serving “the best croissants in the county”, according to locals. Baked fresh on Saturdays, by the time we got there they were unsurprisingly sold out, but we’ll know for next time! Instead, we opted for tasty fresh cut fries with homemade mayo and a delicious corn chowder with brioche French toast.

In the evening, we went to Boathouse Seafood Restaurant on South Front Street, which serves up some of the best seafood in all of Ontario. With live music in the background and a couple lagers from Ontario’s sustainable Beau’s Brewery, we tucked into pan-seared scallops wrapped in bacon on a bed of apricot horseradish sauce, followed by battered haddock soft tacos with purple cabbage mango ‘slaw and large crispy fried coconut shrimp. A nightcap at The Lark cocktail bar—where I went with the Equinox whiskey sour—was the perfect end to our day.

A local institution in the realm of menswear, Tom Lafferty is the proprietor of the eponymous Lafferty’s Crossings, where you’ll find everything from made-to-measure suits to snappy jackets perfect for the crisp fall air. Their vast selection is just as impressive as their tailoring skills, which aren’t so easy to come by nowadays. And after several decades in business, you can trust them to make you look slick from head to toe.

Ok, so you have your new outfit and you’re feeling pretty snazzy, the logical next step is to cross the street (literally) and drop into Park Provisioners Barbershop & Haberdashery, a one-stop-shop for anything a guy may need, including Redwing Boots—not easy to come by—and winter jackets from outfitters such as Fjällräven and Filson. After your fade haircut and shave, pick up one of their pocket colognes or some grooming products. Owner Kyle Thomson is looking at getting a liquor license to be able to offer Scotches and whiskeys of all kinds, so look out for that. Caution: You may walk out of there feeling like John Dillinger.

If you find yourself jonesing for some quality java, I couldn’t recommend the The Brake Room on Dundas East enough. Not only can you get your coffee fix, but you can fix your bike. Connected to their café is a full-service bike repair shop. By the time we arrived a mere two minutes after they opened, we were at the back of a long line of patrons; always a good sign, and the latté was awesome.

What weekend trip would be complete without Sunday brunch? For that, Bourbon and Bean Handshake Society was a solid choice. Opened by a brother and sister duo just over a year ago, Bourbon and Bean has everything from tapas to whiskey tastings to live music on Fridays.

I opted for the Lady Benedict—a delicious toasty English muffin, smoked salmon and soft poached egg all drenched in a velvety dill Hollandaise. I coupled it with a ‘Morphing Mimosa’, because, why not!

Between the food, the people and the unique shops—not to mention all the places we didn’t have time to get to like the Corby Rose Garden and Meyers Pier—a return to Belleville is most definitely on the horizon.

4 thoughts on “Take a Break in Belleville, Ontario”