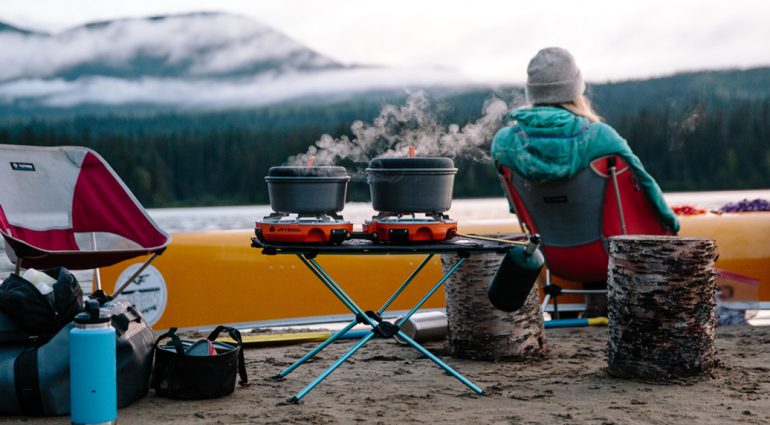 Summer’s officially arrived. For those of you (like me) living in one of our country’s stifling main metropolises, it’s time to bust out your air conditioners that sound like jet engine turbines and your fans that just push around the hot air. Or, instead of trying to secure a tiny patch of poolside concrete, how about you run away to the countryside, where the air is cool, the lake feels great, and the s’mores are waiting to be made?

Furthermore, what better way to enjoy the countryside and Canada’s awesome natural offerings than by camping? Disclaimer: If you’re the type of person who needs their daily Venti Iced Skinny Hazelnut Macchiato, may I recommend glamping. However, for adventurous non-diva types, there’s good old reliable camping. No matter what part of the country you find yourself in, there’s always an interesting not-too-far away option. Here are some of the best camping spots to spend a weekend in the wild this summer.

There are more than 25 km of hiking and biking trails. Channel your inner Evel Knievel and rent a mountain bike to ride the undulating trails of Sugarloaf’s downhill bike park, the only one of its kind in Atlantic Canada. Once at the top of the 1,000-foot mountain, you can peer across the bay at the rolling hills of the Gaspé Peninsula in Quebec. We know you’ll want to capture this moment “for the ‘gram’”, but they have a strict no selfie-stick policy. Just kidding (though we wish we weren’t).

Open between May and late September, family-friendly Sugarloaf Provincial Park boasts 76 campsites: 8 full-serviced, 57 electrical (including 3 yurts) and 11 non-serviced, depending on your need of creature comfort.

Affectionately called the Land of Floating Gardens, 28-square-km Parc National de Plaisance features a gentle landscape broken by bays, ponds and marshes, and is easily accessible from both Montreal and Ottawa by train and car.

There are six campgrounds to choose from, and each is just as picturesque as the next. And while rustic camping can be fun (so I’ve been told!), here campers have the luxury of showers and bathrooms. Head out for a stroll, and as you take in the soft breeze of the Ottawa River you’ll spot a variety of feathered friends, from ducks to heron and ospreys.

Following record floods in 2017 which damaged a good portion of the park’s trails, this summer they’ll be reopening their flagship trail, La Zizanie-des-Marais , a little gem in the hollow of a marsh rich with life.

Rent a canoe and go gliding amongst the park’s irises, turtles and dragonflies. The deep-cut bays are perfect for this quaint adventure, and if you’re camping with little ones, they’ll feel like early explorers discovering the inland waterways of the New World. Other activities include fishing, stand up paddle boarding and biking.

If you get the chance on your way home, head north to the Plaisance Falls, a well-known local geographical attraction.

Yes, you can go camping in the Prairies! It’s not all just wheat fields and Roughriders fans after all. Take a short ride from downtown Saskatoon to this provincial park housing one of the rarest geographical formations in all of Canada. Located in the heart of the Canadian Prairies, this 15-acre playground is most well known for the man-made mountain which gives the park its name. You can’t miss the 45-metre summit as it protrudes peculiarly out of the otherwise very flat surrounding landscape.

Though this modest mountain was built in 1970 to serve as ski hill for the Canada Winter Games, its slalom-hosting days have long been over and it now acts as the focal point of the charming Blackstrap Provincial Park. Did we mention that Blackstrap also feature a number of appealing activities to complement your camping getaway? They’ve got boating and fishing, bird and wildlife watching, and just about everything in between.

Last but certainly not least on our list of top picks for the best places to go camping across Canada is Lac Le Jeune Provincial Park in British Columbia. For a province that is already known as an outdoor adventurer’s paradise, there’s no surprise at the caliber of campgrounds within arms reach (figuratively speaking) of major BC cities.

Established in 1956, Lac Le Jeune is an example of a campground and all-around adventure destination within reasonable distance from a main city, in this case Kamloops. A brief sub-hourlong zip down the highway takes you to this gem of provincial park campground, where people come from all over the country for the hiking and biking along its gorgeous trails, as well as swimming, fishing and boating at both Stake and Walloper Lakes.

The park’s camping season this year runs until September 30, but don’t wait to book your getaway—spots fill up very quickly at this highly-sought after camping retreat.

Talk about camping with a view! here are some of our favourite snaps shared by you while on your outdoor adventures…