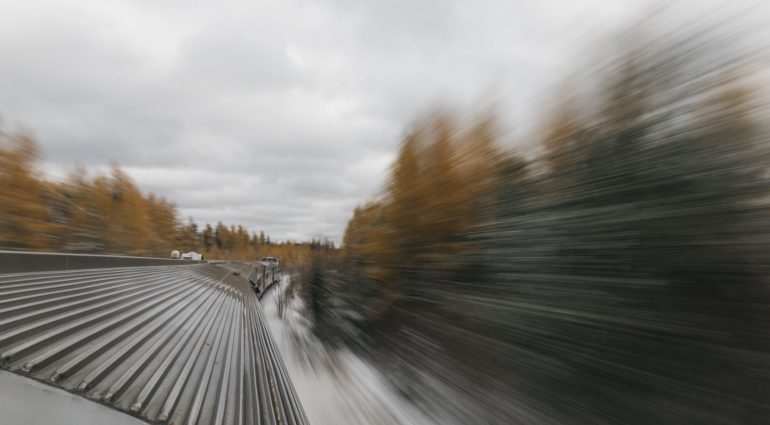 We’ve partnered with Passion Passport to introduce travellers and creatives to vibrant cities and communities across Canada. We’ve compiled a few of our favorite train-themed shots to give you a little creative inspiration for your next journey with VIA Rail — just don’t forget to bring your camera! 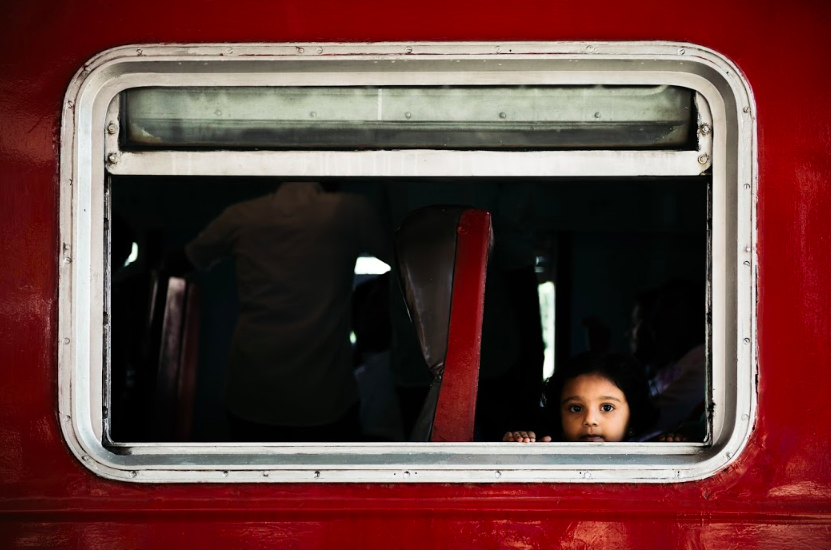 “My fiancé and I were waiting near the tracks at the train station in Colombo to catch our train to Kandy. We had only been in Sri Lanka for a day, but while I was adjusting to the sights and sounds of my surroundings, I made eye contact with this beautiful young girl. I reached for my camera just before the train departed. As she rode away, we smiled at each other. It was the warmest welcome I could have been offered.”

In a photograph like this, framing is key. Be patient and wait for a scene that captivates you. If you photograph inside a dark train station, set ISO slightly higher (300-400) than you would in a well-lit setting. Photograph on aperture priority mode to expose the image correctly, and be sure that all verticals and horizontals are aligned — in such a simple image, small details matter! 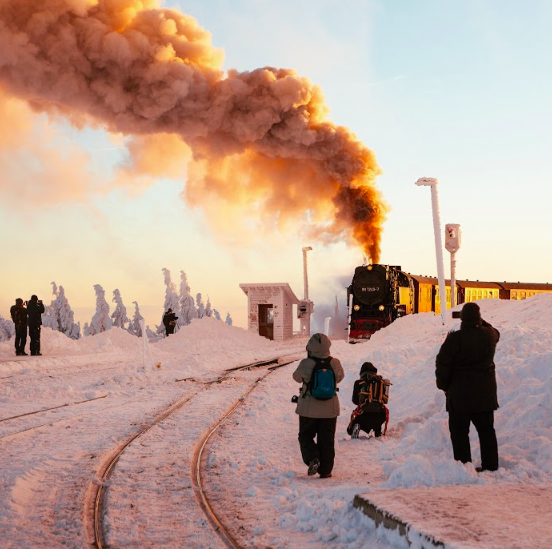 There’s an old locamotive that makes its way up the Brocken (the highest peak in the Harz Mountains of Germany) several times per day. It’s called the Harzer Schmalspurbahn, and it allows riders to step back into the 19th century. Plus, it offers some incredible shots of the landscape unfolding below. When @dennisschmelz took the trip, he managed to catch the sunset, which turned the locamotive’s smoke a beautiful burnt orange color. He remembers this experience as one of the best of the year.

A scene like this is particularly tricky to photograph because it contains so many variables: the train — and the human subjects — are in motion, the lighting needs to be captured just correctly, the plume of smoke needs to be in focus, and the scene needs to be shot quickly. Shoot at an ISO of around 200-250 — a good reading for bright, natural light. To minimize blur, try shooting in shutter priority mode — have your settings reflect a quick speed (try 1/100 or 1/125 to start). For this scenario, it may be helpful to set up a tripod so that you can quickly and continuously take shots as the train rounds the bend. 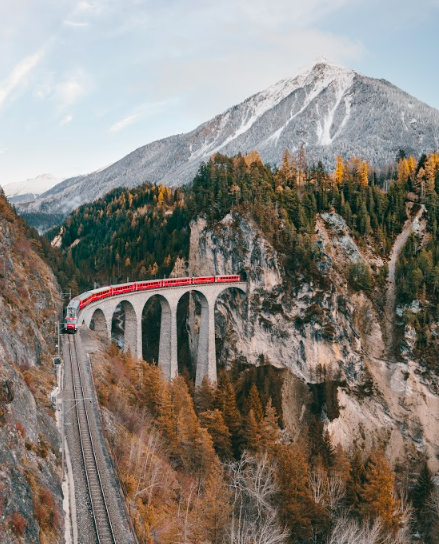 “The pleasure we derive from journeys is perhaps dependent more on the mindset with which we travel than on the destination we travel to.” ― Alain de Botton

For an image like this, it may be necessary to do a little hiking, but always be sure to check that trails and routes are open and accessible before you decide to embark on a hike to take that perfect photo. For this type of shot, you’ll want to use a wide-angle lens — anywhere from a zoom lens to a 35 mm, depending on where you’re standing in relation to the tracks. Again, a tripod (or makeshift tripod) might be helpful as you frame your image and wait for the perfect moment to release the shutter. Because the train is relatively far away, shooting in aperture priority mode won’t be an issue. In a well-lit setting like this one, your ISO should read between 100-200. Choose an aperture setting based on the exposure level you’d prefer (i.e. a moodier photo vs one that is light-filled). In an outdoors shot, take care to avoid overexposing bright spots in the photo (i.e. the sky). To remedy this, focus your lens on the brightest spot in the photo and expose for that light. The shot will look dark on your camera screen, but a little post processing will bring out a well developed (and well exposed) image. 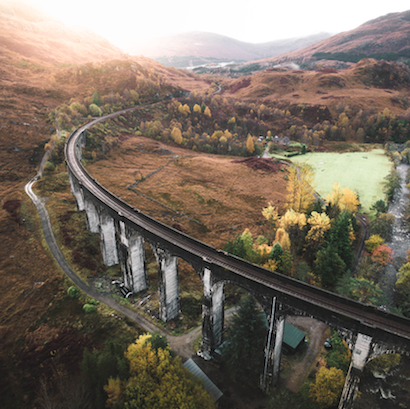 Glenfinnan Viaduct, famous for being the route the Hogwarts Express took in the Harry Potter films, was the last stop on @connormollison’s 700-mile-long trip around Scotland. Most people visit in the summer when you can see the Jacobite steam train go by, but Connor was there in December.

“Weather in Scotland can be really unpredictable. But even if there is bad weather, it can create a nice, moody scene. This particular morning wasn’t looking great, but the light eventually peeked over the hill and created this beautiful, golden glow. This spot may be cliché, but that actually makes it a little more special.”

If you’re photographing a well-known route, look for ways to make your capture visually unique. In this image, the photographer utilized depth, perspective, and light to create a compelling shot. Before you decide to get creative, ensure that you’ve selected the right ISO (100-250 for outdoors shots) and aperture (play around with middling f/stops, such as f/5-f/9 to experiment with exposure and depth of field). In this image, the train has either just passed, or has yet to pass, so shutter speed is of little technical importance here. Play with exposure to set the tone of the image — a feature you can amp up in post processing. Always look for unique perspectives and views, but do remember to keep your footing and be safe! 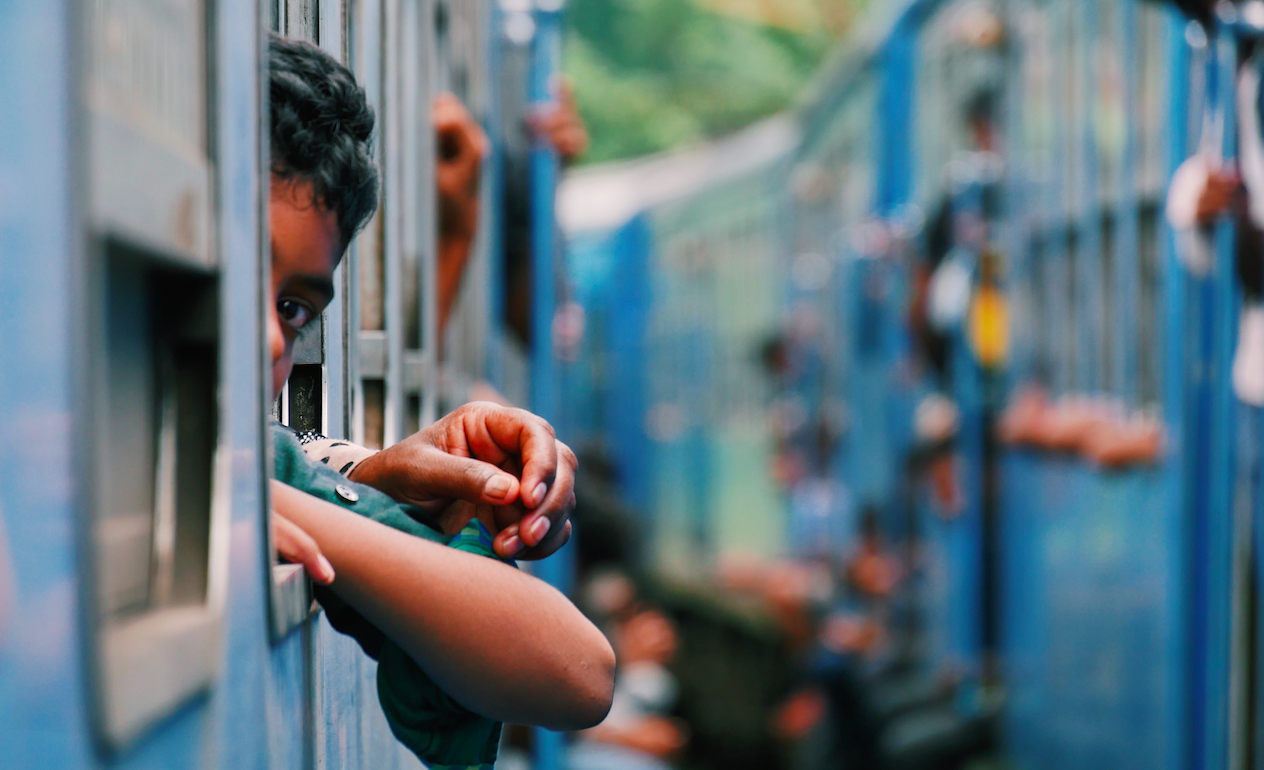 There’s no more engaging way to take a portrait than from the window of the train [note that for safety reasons, you cannot take a picture out of the window of a VIA Rail train – ed.]. In this shot, the photographer has utilized a variety of elements — color, depth of field, portraiture, and perspective — to create a beautiful image. For up-close shots, pay close attention to your aperture. You’ll want your photograph to have a shallow depth-of-field (some of the image in focus, with the rest blurred). For this, you’ll need a lens with a maximum aperture that lets a lot of light in. To achieve this effect, choose an f/stop such as 1, 1.4, 2, 2.8, or 4 and focus on your chosen subject. Once you’ve mastered the focus you desire, add visual interest in the background by either shifting your shot from portrait to landscape, or shooting from a different perspective. As with all portraiture, always ask before you photograph someone! If you don’t speak the language, a smile and gesture will go a long way. 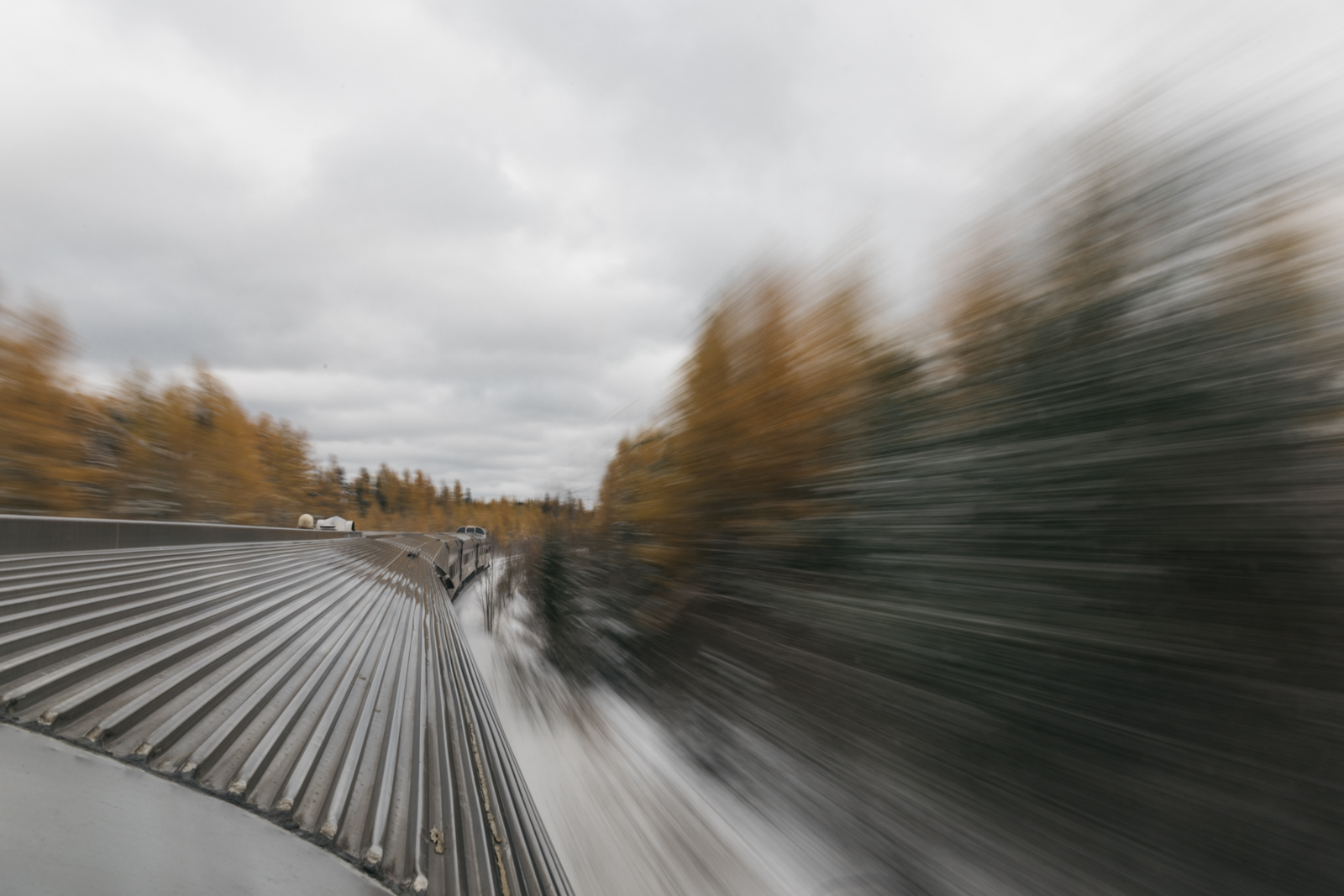 “Railway termini are our gates to the glorious and the unknown. Through them we pass out into adventure and sunshine, to them, alas! we return.” — E. M. Forster

While rains are a lot easier to photograph when they’re not moving, they also offer the most compelling views while in full throttle. This icy, speed shot was snapped on the journey between Toronto and Vancouver, as snow fell on the mountain peaks and pine forests. To get a similar shot, you’ll have to head to the train’s observation car, and focus your lens on the body of the train. Then, set your camera to aperture priority and experiment with a longer shutter speed, between ⅙ of a second and 5 seconds. Close your aperture to an f/stop of around f/8 and adjust your ISO to 400, depending on the amount of natural light. If you keep your focus locked on the train, you’ll get a compelling shot with a blurred backdrop. In this case, the effect nicely emulates the brisk, whistling winter winds.