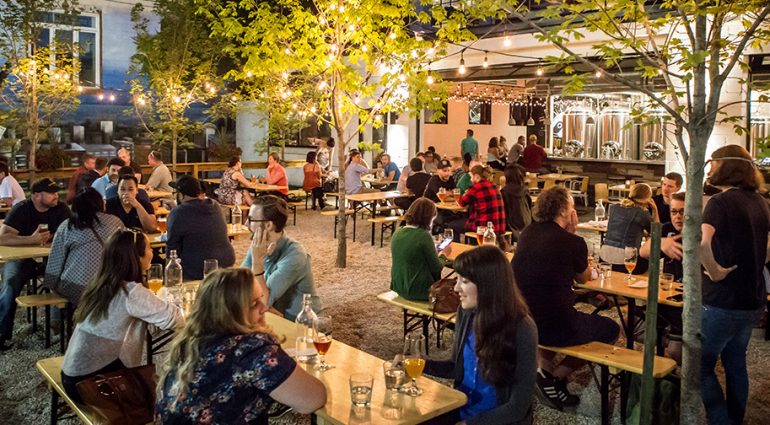 This cozy west-end neighbourhood has one of those Toronto place names (like Etobicoke and Strachan) that can get your tongue tied at first glance. The name itself actually has Spanish origins and the accepted pronunciation in Toronto is ‘Ron-sess-vails’ (like sails) but the neighbourhood’s nickname of “Roncy” is pretty widely known and accepted in the city. Plus, mentioning it will make you sound like a local.

Name-dropping “Roncy” in conversation could refer to the neighbourhood or the avenue of the same name, which is a lively strip of markets, boutiques, restaurants and cultural hotspots worth exploring. You’ll find a mix of millennials and young families here along with older Eastern Europeans too as the neighbourhood has a strong Polish history. In fact, a Polish Festival is held each September with an outdoor beer tent, polka dancing, and plenty of pierogies on offer. But you can experience elements of Eastern European culture here year-round. Here are some spots to spend a day out in Roncesvalles.

As an amateur chef, one of my favourite boutiques in Roncesvalles is Cookery, a modern cookware shop on Roncesvalles Avenue. The main floor has all manner of pots, knives, dishes, cookbooks and gadgets to make any home chef jealous.

If you’re looking to amp up your own cooking skills, sign up for one of Cookery’s workshops on subjects like knife skills, handmade pasta, artisanal bread-baking and cooking traditional dishes from India, France and Spain, to name a few. Their PA Day kids camps are a popular offering too and often sell out.

This small but mighty store is packed with all manner of Eastern European eats, from deli meats and spices to cookies and prepared foods sold by weight. I was most impressed by the buckets of traditional pickled herring (also sold by weight!), and a large freezer case stocked with many varieties of frozen pierogies. Benna’s is known for their paczki, a jam-filled donut, so make sure to grab one of those while you’re there.

Environmentally-minded Torontonians head to this green boutique on Roncesvalles Avenue to shop for eco-friendly housewares, accessories, beauty products and gifts. Given the neighbourhood’s demographic of families with young kids, you’ll find plenty of practical items in stock like stylish water bottles, beeswax wraps (an eco-friendly alternative to cling film), and reusable produce bags. There are even a few Toronto-centric items too like reusable tote bags featuring a pattern of iconic city landmarks (the CN tower, the ROM) that would make for a great souvenir.

Roncesvalles’ most popular Polish restaurant is Café Polonez. I found a nice mix of neighbourhood locals and Eastern European natives gathered here. Pierogies are a highlight and are so popular that they’re also sold frozen by-the-bag to take home.

I ordered the ‘Platter for 1’, which was so generously sized that I could have easily split it between two. You’ll likely be taking home leftovers from your meal at Café Polonez, but I’m not complaining as it gives me an excuse to enjoy Polish flavours for a second meal.

If you’re looking for a post-pierogi meal dessert, make sure you pay a visit to Ed’s Real Scoop. In warmer weather, you’ll find a lineup of eager patrons waiting for their scoops. Ed’s was one of the first modern homemade ice cream shops in the city when it opened in 2000 and one of their most popular locations is on Roncesvalles Ave. I love how they call their head ice cream makers ‘churnmasters’, showing a true appreciation for the sweet science it involves. Order a serving of the burnt marshmallow and thank me later.

Roncesvalles is lucky to have Toronto’s oldest movie theatre (that’s still screening films) in the neighbourhood. The Revue Cinema was built in 1912 and still has cool Art Deco design touches to show for it.

Expect an eclectic combination of new flicks and cult classics along with great monthly programming like afternoon parent-and-baby screenings. But my favourite part of visiting the Revue is getting to enjoy a nice glass of wine or a pint of beer with a movie since the theatre is liquor licensed. In fact, at their monthly Drunken Cinema series screenings, it’s encouraged. Sign me up!

Speaking of beer, one of the best spots for a craft pint in the city is Bandit Brewery. The German bierhalle-inspired design is a great place to catch up with friends over a house-brewed beer. Try the Wizard of Gose series—a sour and slightly salty ale—for something a little out of the ordinary.

The front patio is a great spot to gather, especially when the fairy lights are twinkling in the evening. On a nice night they’ll open up the garage doors to bring that patio feeling indoors. Stop by the bottle shop on your way out to admire how they’ve incorporated Toronto’s beloved trash panda, the raccoon, onto their labels. Cheers!

VIA Rail is modernizing. Find out about the changes taking place by visiting our new About VIA site.