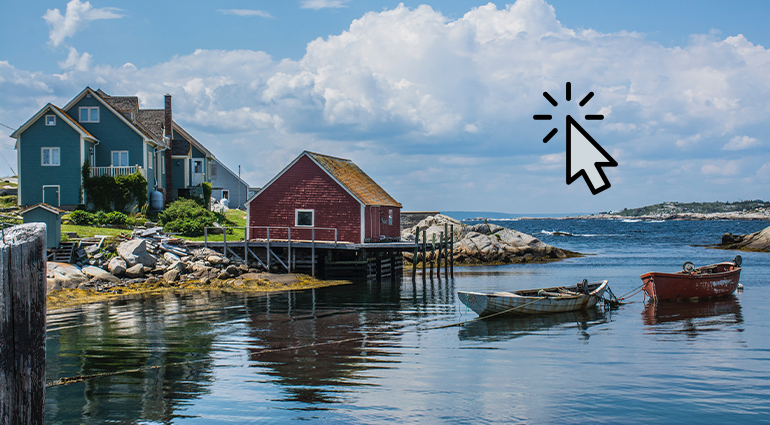 Atlantic Canada, its mesmerizing vistas and its cultural icons, has a special place in the hearts of Canadians. From the tides of the Bay of Fundy to the windswept beaches of Prince Edward Island, from Anne of Green Gables to the legendary folk tunes of Stompin’ Tom Connors, there’s nothing quite like the Maritimes—and we love it.

VIA Rail has been proudly running our Ocean train since 1978. It is the oldest continuously operated named passenger train in North America. It starts in Montreal and sweeps away adventurous spirits along the coast of the Saint Lawrence and through the misty night to its final destination of Halifax, Nova Scotia, on the very edge of the Atlantic Ocean—hence its name. Can you tell how fond we are of this route?

Pretty soon, we will be back on board riding the rails east. In the meantime, we can still enjoy the sights on a virtual tour of some not-to-miss attractions. Get comfy, make yourself a nice clam chowder, and enjoy the ride.

Perhaps the region’s biggest claim to fame is the community of Peggy’s Cove, Nova Scotia. No doubt you’ve seen pictures of the renowned red-topped lighthouse. This place is beyond picturesque. So much so that you can embark on virtual tours on some of its most popular sites, from the lighthouse to the actual fishing village itself.

Nova Scotia Webcams offers live feeds of dozens of stunning spots across the province, including a UNESCO World Heritage Site and one of the seven wonders of North America, the Bay of Fundy, which lies between the two provinces and is know for its incredible high tides. Check out the view in real time from the lighthouse at Peggy’s Cove or of Digby harbour to get you feeling like a Maritimer, no matter where you are.

For a change of speed, we’re heading into the city of Halifax, widely recognized as the cultural and economic hub of the entire Atlantic Provinces region. Here, you’ll discover the Art Gallery of Nova Scotia’s virtual tour, which includes the Maud Lewis Painted House permanent display.

Lewis’ life story is an incredible one. She was recognized for her artistic virtues toward the end of her life and is now enshrined in Canada’s history. The museum does an excellent job of giving her life’s work—her art—justice.

Let’s take a stroll, shall we? Just like everywhere across the country, the weather’s dipping down slowly but oh so surely. Luckily for you, you can still wander the virtual trails of the Halifax Public Gardens, where the flowers are always in bloom. These Victorian era gardens are a Halifax landmark and were designated a National Historic Site of Canada in 1983.

While many a Newfoundlander will correct you if you were to falsely lump them in as part of the Maritimes, excluding them would sadly be leaving out some of the most breathtaking sights in all of Canada. A province that relies heavily on tourism, like many regions they’ve been affected greatly by the pandemic. Last spring, CBC Newfoundland and Labrador teamed up with Skipper Bob of Trinity Eco-Tours to give viewers a virtual tour of giant, 15-30,000 year-old icebergs. It’s a must-see!

And if you’re a homesick Newfoundlander, you can always take some time enjoying the live webcam of downtown St. John’s. Talk about relaxing!

3 thoughts on “A Mini Tour of the Maritimes, Virtually”