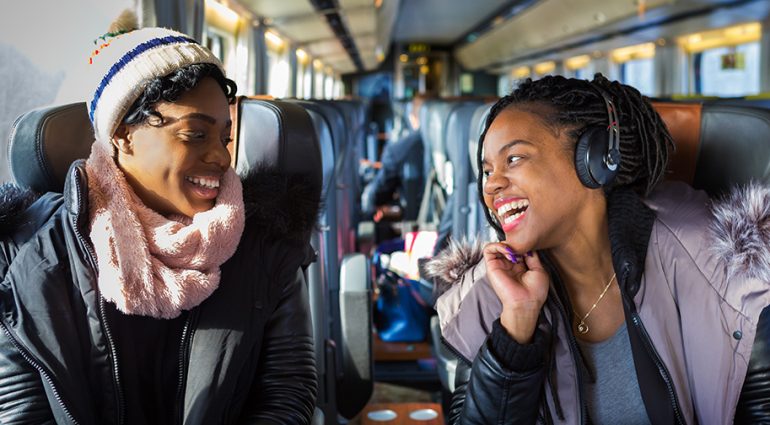 Travelling home for the Holidays? We’ve got plenty of great content to keep you entertained on board. Chose from dozens of movies, TV shows and podcasts, including award-winning content from the CBC, Telefilm Canada and Les Films Séville on our On-Train Entertainment system catalog—just bring your own device!

So between long periods of gazing out the window at the beautiful snowswept sceneries, grab a drink or a hot chocolate, sit back and relax. After all, that’s the beauty of train travel.

Here are a few options to get you started…

Based on a true story, this gripping and timely thriller follows an idealistic employee (Theo James) as he investigates the grisly murder of his predecessor and uncovers a vast global conspiracy that may involve his own boss (Oscar winner Ben Kinsley).

When the filthy-rich Roses suddenly find themselves broke they’re forced to rebuild their empire within their only remaining asset – Schitt’s Creek, an arm pit of a town they once bought as a joke.

Anne with an E

This reimagining of the classic book and film is a coming-of-age story about a young orphan who is seeking love, acceptance and her place in the world. Amybeth McNulty stars as Anne, a 13-year-old who has endured an abusive childhood in orphanages and the homes of strangers. In the late 1890s, Anne is mistakenly sent to live with aging siblings, Marilla and Matthew Cuthbert, who live on Prince Edward Island. Anne, who proves to be uniquely spirited, imaginative and smart, transforms the lives of Marilla, Matthew and everyone else in their small town.

The Secret Life of Canadians

The Secret Life of Canada highlights the people, places and stories that probably didn’t make it into your high school textbook. Join hosts Leah and Falen as they explore the unauthorized history of a complicated country.