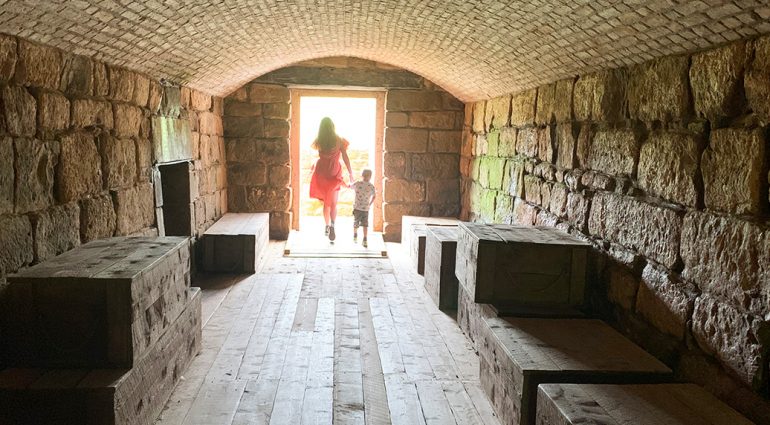 Like many small towns in Nova Scotia, Amherst is going through a bit of a revival, with fun new businesses opening up and a growing food scene. With many parks close by, areas of natural beauty all around and a quaint downtown filled with impressive 19th century stone buildings (reminding you that this was once the most industrious town in Nova Scotia), Amherst is worth checking out.

Historic department store Dayle’s closed in 2016 after serving the community for a century and was soon turned into a collective of smaller boutiques, antique stores, and a cafe, with space for live performances and theatre. Now named Dayle’s Grand Market, the space is impressive and a fun place to explore – with a sweeping grand staircase, antique light fixtures and printed tin ceiling still intact.

At the back of the market is Bliss Crystal Cafe, which has a new age feel, excellent coffee, and tasty sandwiches. I browsed the art, crafts, and local jams on sale at Maritime Mosaic (which takes up most of one side of Dayle’s Grand Market) and got chatting with Kathy Legere who owns The Copper Tree Boutique that takes up a big part of the other side, and is filled with hip clothing, shoes, and accessories.

Though the town is small (with fewer than 10,000 residents), Legere explained that business was great, with the live music on weekends attracting even more people. “Amherst is on the upswing,” Legere assured me, “Businesses are growing, entrepreneurs are starting new things, and lots of young people are moving back to the town.”

Just around the corner, you can learn to hook (rugs, that is) at local designer Deanne Fitzpatrick’s studio and store. Make sure to pick up one of her beautiful pieces (many have a local theme, with moose, maps, saltbox houses and the like), hooking kits, and supplies. Regular workshops and generally helpful staff, as well as cozy nooks and welcoming leather sofas provide space to hone your skills. Oh yeah, and they give out homemade oatcakes as soon as you walk through the door, so it is well worth popping inside.

Eat Your Heart Out

Of the restaurants options right downtown, and I heartily recommend you eat at Breakfast at Brittney’s, because they do a lobster eggs Benedict that’s amazing, and serve great French press coffee. The Art of Eating Deli is known for their sandwiches and healthy treats such as smoothies and buddha bowls, and is a great place to stop for takeout before you get back on the train. For a fancy afternoon tea on vintage china, stop in at Birkinshaw’s.

A tip from a local friend had me out in an almost deserted mall to eat what she promised was the “best jerk chicken outside of Jamaica”. I was skeptical, but met my friend at Flutterbye Jamaican Caribbean Cuisine, in a space far too vast for the tables and chairs clustered around the kitchen at the back that owner and cook Donna Gogan shares with a Korean joint. Next to the kitchen there was a third food option, a table set up with homemade cakes and jellies, staffed by two little old ladies. Granted, it was an odd place – but the food was fantastic. My lunch plate of jerk chicken, coconut curried chickpeas and rice was lick-the-plate-clean delicious. Gogan grinds all her own spices, and every dish is carefully made just like it is back home in Jamaica.

If you’ve ever taken the train through this part of the world, you already know that the Amherst area is beautiful. Bordering the Tantramar Marshes, a saltwater marsh system along the landmass that joins New Brunswick and Nova Scotia, the Amherst area is a haven for wildlife and migratory birds. Just outside of town is the Amherst Point Migratory Bird Sanctuary, where you can walk peaceful trails around lakes and marshlands (and hopefully spot birds.)

Also close by are two National Historic Sites – Beaubassin, the site of a major Acadian settlement in 1761 that was burned to the ground by the French, and Fort Beauséjour, a star shaped fort (much like the Halifax Citadel, only smaller) which was built in 1751. There isn’t much at Beaubassin save hay fields and interpretive panels, though it is very pretty.

There is a lot to see, however, at the fort. Take time to walk through underground stonework tunnels and along the ramparts, explore the museum and interpretive centre that tells the story of the fort and the area around it (there are a fair few exhibits about the railway, a very important part of local history).

I only spent two days in Amherst, and left feeling like there was still more to this little town that warranted a return visit. I eyed other promising food places but was too stuffed to venture inside, and learned that a string of long sandy nearby beaches – on the Amherst Shore – offer some of the warmest water in the Maritimes for swimming. Next time!

Header image: Exploring the tunnels of Fort Beauséjour, a National Historic Site dating from 1751, located just outside of Amherst.

One thought on “What to do in Amherst, a town on the upswing”