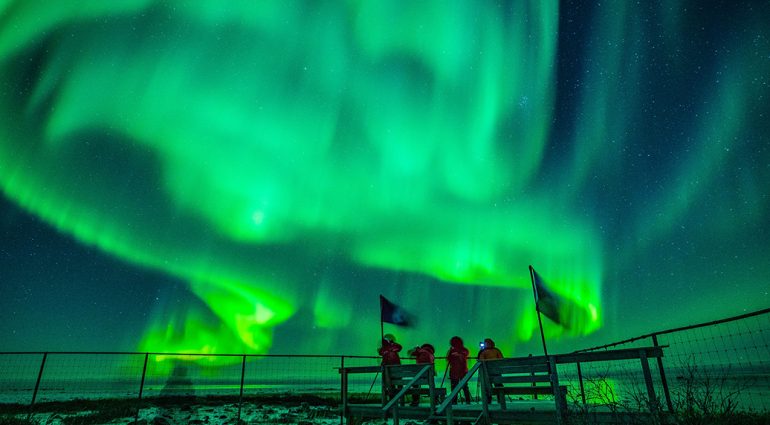 Set on the shores of Hudson Bay, right in the middle of a migratory route—from forest, to tundra, to sea—Churchill has earned its nickname, Polar Bear Capital of the World. Every year, during the autumn “polar bear season”, visitors from across the globe descend on this tiny, subarctic village where the bears outnumber the residents (1,000 local polar bears, according to some estimates to just 899 people).

But while these furry, four-legged, ferocious creatures (they may look cute, but they are bears) are worth the trip, there’s so much else to do in this town of the great white north—trust me, I’ve done it all.

Going for a hike in the wilderness near the untamed coast in a place that’s home to the world’s largest land-based carnivore will get you up close and personal with everything that makes this place special (important note: do not walk alone!). As I go out with my guide, Paul, who has a rifle slung over his shoulder, he points out local wildflowers and explains the unique ecosystem of this northern corner of Manitoba, where boreal forest meets tundra.

Quickly, we spot an arctic fox who doesn’t give us a second look, happily sunning himself on a rock. And then—two bears, a mother and a cub, about 70 metres away. “See how they just appear?” Paul says, advising me to stand still and let them make the next move. They don’t hesitate, walking away from us. The two disappear just beyond a pile of grey Precambrian rock—the oldest on Earth, and we catch one more glimpse of them a moment later, moving much faster than us, heading toward the Bay.

You’ll hear them before you see them, swimming during “beluga whale season” in the summer, when these ocean mammals come here to spawn. Donning a thick Arctic wetsuit and riding out in a zodiac with a company called Sea North Tours, I’m quickly floating in the freezing green-blue water, where the Churchill River meets the mighty Hudson.

In our boat we wait, listen, and a moment later, first faint, then stronger, hear them. Through their high-pitched, slightly alien “song”, the belugas, as big as compact cars, communicate with each other. I imagine they’re talking about me, and maybe that’s true, because a few moments later I spot one, faint in the murk, then some more, clearer, closer. Finally, the friendliest among them, huge and seemingly smiling, churns the water just beyond arm’s reach, flipping to make eye contact before disappearing again, down the river.

While remote, European exploration began very early in this corner of Canada. In 1717, the Hudson’s Bay Company constructed a fort on the banks of the Churchill River, which was improved to an impressive stone structure built in a Vauban star pattern—the Prince of Wales Fort. It still stands, now a National Historic Site of Canada. Parks Canada conducts tours there, taking visitors back to a time when hundreds of First Nations people traded here, while showing the (often unprepared) Europeans how to live off the land. I walk its ramparts, bristled with dozens of cannons, and try to imagine when this place was pulsed with life and commerce.

While scarce during the warmer months—when evenings are very long, and days can have as much as 18 hours of sunlight—the Aurora Borealis are often visible in the skies during fall, winter and spring. You’ll find plenty of viewing options around town, from the heated dome and observation deck at the Churchill Northern Studies Centre, to Tundra Buggies and the glass-roofed Aurora Pod. Or, sometimes, like me, you can just step out the door of your motel, look to the sky, and see that awe-inspiring, pulsing green wave from the heavens.

Located on the shores of Hudson Bay, 30 minutes north of Churchill by small plane, Seal River Heritage Lodge is right in the heart of the action. One of National Geographic’s Unique Lodges of the World, it’s ringed by heavy fencing—meaning you can spot some of the hundreds of bears that walk by on their way to the bay from close but safe proximity inches away on the other side of the fence, or from the broad windows of the lodge, while you eat breakfast or sit fireside.

But it’s even better to get out there on the tundra, where guides trained in bear behaviour take guests for walks among the wild polar bears. On my visit, a massive male bear spotted our small group, turned, and started back toward us—a heart-stopping sight, his massive claws propelling him steadily, soundlessly toward us. “That’s close enough!” our lead guide, Derek, calls to the bear, steadily, firmly, before the massive beast finally changes course, walking away to our right, before settling some distance away.

“You won’t get much better than that, folks!” Derek concludes, and I whole-heartedly agree.

You traveled to Churchill, and we want to share the following awesome pictures you took on your subarctic adventure!

Header image: In many Indigenous cultures, the aurora borealis were seen as the dancing of human or animal spirits. Photo credit: Nate Luebbe