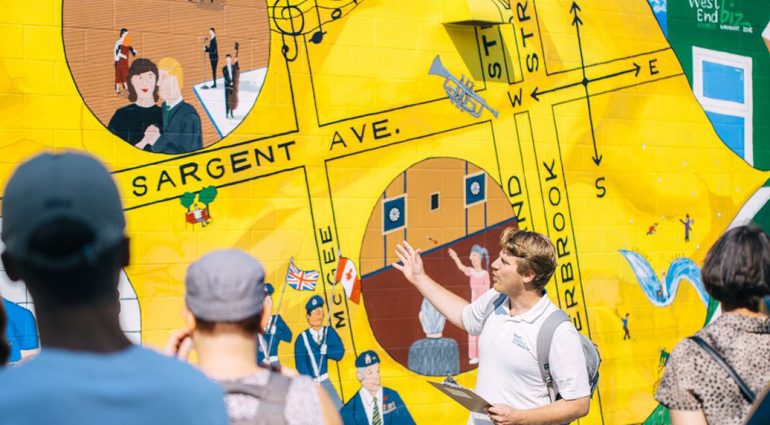 Over 100 languages are spoken in Winnipeg. Admittedly, this stat always seems a bit fanciful, but it surely becomes evident when you take a stroll through the city’s West End.

If you are to venture west from the University of Winnipeg down Portage, Ellice or Sargent Avenue (all of which pretty much run parallel) you will enter a world of restaurants offering Korean, Italian, Greek, Cantonese, farm-to-table, Laotian, Vietnamese, Ethiopian, Indigenous, and Salvadorian cuisine – to name but a few.

On top of that, you’ll find bakeries whose shelves are stocked with Filipino sweets and sourdoughs utilizing local, organic wheat, and even taiyaki ice cream (look it up!) from a delightful new shop called Not a Waffle. Not to mention your choice of nightly live music of almost every genre — and that’s within only three-square blocks of this mural-clad neighbourhood.

While antiquing may not be first on your list, I assure you it is worth your time to go see The Old House Revival Company.

Located right beside the CBC on Young Street, this place is a three-storey hokey extravaganza, saturated in all manner of knickknacks. While it might not be the place to go looking for an Edwardian buffet – although I wouldn’t put it past them – it certainly is the kind of spot that David Sedaris would relish. Items like taxidermied owls in glass cases, and portraits of lavishly moustachioed men from the 1890s compete with tea cups, old gas cans and circa 1960s table hockey sets for your attention. It’s simply splendid.

Something arguably more old school which has laid the foundation for new businesses in the West End is sourdough. Yes, sourdough!

One of the most recent spots to open is Hildegard’s Bakery, located just down the block from The Old House Revival Company, on Portage Avenue. Hildegard’s is a spinoff of Integrity foods (located way north in Riverton, MB), where owners Dora and Cornelius Friesen (Manitoba boasts thousands of Mennonite Friesens) made a name for themselves with their agriculture-tourism initiatives that involve pizzas and breads baked in a brick-fired oven built by the late and legendary Alan Scott.

At Hildegard’s, as at Riverton, the Friesens’ daughter Judith, along with her husband Dave Newsom and their partner Michael Harms make bread and pizza using a very old starter, allowing plenty of time to ferment before baking, and cooking in a wood-fire oven (which also heats the whole place in winter). Their pizzas, only available for lunch, are sublime, and their Menno Borscht – featuring beets, sour cream and caramelized onion – is a must.

Two blocks north of Hildegard’s is Eadha Bread, which opened in May 2018. Before then, owner Cora Wiens was selling out her organic, 18+ hour fermented sourdoughs regularly at farmers’ markets. She also does pastries, pies, hosts bake workshops, and has one peach of an Instagram account that proudly states their mandate: “Queer, Anti-racism, Decolonization… everything is fermented (even the cake!),” along with sharing posts that are as tangy as the bread, with captions like: “Max arrived with a moustache today, so you know it’s going to be a weird one.”

Off the Wall (Street)

Meanwhile, Wall Street’s Sleepy Owl has been baking fancy fermented bread since October 2014. Along with the breads which sell out fast, this is also the place for shimmering and crusty pastries. And now, the street is quickly becoming an epicurean destination. Barn Hammer Brewing is located just one block south, and by late April a new New York-style pizzeria called Wall Street Slice will open. Take note: it’s by the folks behind The Red Ember – the city’s busiest food truck (they make wood-fired pies right on the massive truck, which is a converted shipping container), and Red Ember Common – an always busy counter-service restaurant inside The Forks Market.

Due to its sheer size, discovering the best of the West End can seem like a daunting task. Thankfully, throughout the summer months you can book a tour with the good people of the West End Biz, who offer three thematic walking tours covering restaurants, murals and artisans all run by witty, engaging tour guides.

The artisan tour will take you to meet the creative types who run shops and create the wares within them. Mural tours will introduce you to the history of this hood through paintings that line the walls of these streets, many of which depict the history of the various ethnic groups and noteworthy individuals who helped make the area so vibrant. Restaurant tours in particular offer incredible value, as you get to taste the incredible food along the way – including stops like our new favourite taqueria, Sargent Taco, where owner Carlos Bosque serves meals just like he used to eat in his hometown of Mexico City.

Not convinced about a visit? Let’s throw in that the West End is also the best neighbourhood in the city to purchase spices (with standouts including Dino’s and Dong Thai), eat Winnipeg’s best pho (I’m all about Pho Hoang), buy a knock off soccer jersey along with some pupusas and curtido (all in the same shop, El Izalco), attend queer bingo for a great cause (Good Will Social Club), and have a shawarma (pick from many options) – it’s just that diverse!