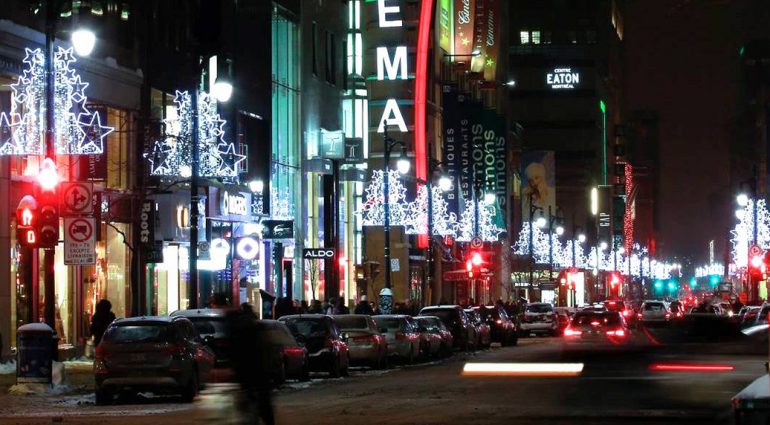 Every year for three weeks in July, world-class comedy descends upon Montreal when Just For Laughs comes to town. But that doesn’t mean Montreal is a laughless city for the other 344 days of the year. In fact, quite the opposite is true. This city boasts a vibrant comedy scene year-round with multiple shows running every night of the week.

Quebec’s biggest city has a knack for producing some great stand-up comedians. Whether you live in Montreal or are just passing through, take in a show and discover one of the hidden gems of this fair city: its comedy scene.

Celebrating its 40th anniversary this year, the ‘Nest’ has created a loyal following. Co-owners David Acer and Phil Shuchat took over in 2011, made some programming changes and have produced a solid schedule. Thursday through Saturday features internationally recognized headliners, like Judah Friedlander and Debra DiGiovanni, while Sunday through Wednesday offers a mix of pro and amateur comics. The drinks are reasonable, the lineups are stellar, and it only costs $15 to get in on the weekends, $10 on Sundays, and $5 during the week.

Acer is a big champion of stand-up in this city, having performed his first gig here in 1989. Comedy is in his DNA, and he understands its role as an essential survival skill. “It helps to have a sense of humour when you live in Montreal,” he said. “The construction, the winter, and the pop-up roadwork can turn a 10-minute drive home into getting re-routed through Cornwall, Ontario.”

On any given night of the week in Montreal, you can find at least three independently produced shows around town. Montreal comedy scene superfan Karen Haines claims all it takes is $25 to pack her week with stand-up gold. “There are always good shows going on. I often find myself conflicted… or going to two shows in one night,” she said.

Even though most shows take place in coffee shops and bars, they’re easy enough to find on Facebook.

Leonard Yelle is another champion of the city’s comedy scene. He’s the guy that shows up to every comedy class graduation showcase night with coffee, donuts, and words of encouragement for the first-time performers. His love for the art is so great that he started his own monthly show with Anthony Imperioli of Nonna Maria fame. Bishop and Gags takes place at the Bishop and Bagg pub in the Mile End on the second Wednesday of each month.

Bishop and Gags boasts a lineup of solid up-and-coming comics and usually features a local big-name headliner, such as Derek Seguin or Joey Elias. I recently caught relative newcomer Robyn Flynn at a show and she blew me away. In the age of Hannah Gadsby, this woman is a contender. She took on both her weight and personal trauma to create a set that was powerful and hilarious. Cost of admission? Whatever you felt the show was worth. Seriously. They pass a hat at the end of the show.

Other great spots include There’s Something Funny Going On at Blue Dog, run by another staple of the Montreal comedy scene, Rashta Kruger. The show takes place every Monday night in a cozy setting on Saint Laurent Boulevard in the Plateau neighbourhood. TSFGO is a favourite of local comics, and you can often catch some semi-pros honing their sets or visiting ex-Montrealers trying out new material.

On Tuesday nights, you can catch the NDG Comedy Show, which takes place weekly at the Shaika Café on Sherbrooke Street West.  Shaika has a great vibe and admission is pay what you can. On Wednesdays at 8 pm, there’s the Comedy Lab at the Nest, where pro and amateur comics alike compete for audience votes by writing jokes on a pre-determined topic. Entrance is $5, which also gets you a free pass for select Thursday or Friday night shows.

If you’re looking for something a little different with your comedy, Montreal will not disappoint. Every Sunday night, for example, you can check out the Comedy Village, which takes place in the basement of the M Hostel on Saint André Street. The atmosphere is backpacker chic, there’s a bar, and the crowd is a great mix of comedy fans and hostel guests. Price is pay what you can.

There’s also Comedy at the Art Loft, which is the only weekly bilingual show running in the city. It’s a late show (10:30 pm) on Friday nights with a $10 cover and a reputation for being a good time. It’s held in a private loft and features an afterparty.

Think you might want to try your hand at stand-up comedy? Or maybe you’re a seasoned pro passing through for the night and want a little stage time? Currently, Montreal only offers three true open mics. These are shows where you sign up and perform in the same evening. These take place at McLean’s Pub on Sundays, McKibbins on Mondays, and Grumpy’s on Tuesdays.

Montreal is a city that knows how to have a good time, a fact evident in its comedy scene. There’s a strong community dedicated to putting on great shows and fostering upcoming talent. So, don’t wait for July to roll around – come check out a show any time of the year. You’re guaranteed some good laughs, and it’ll be a lot easier on your wallet!