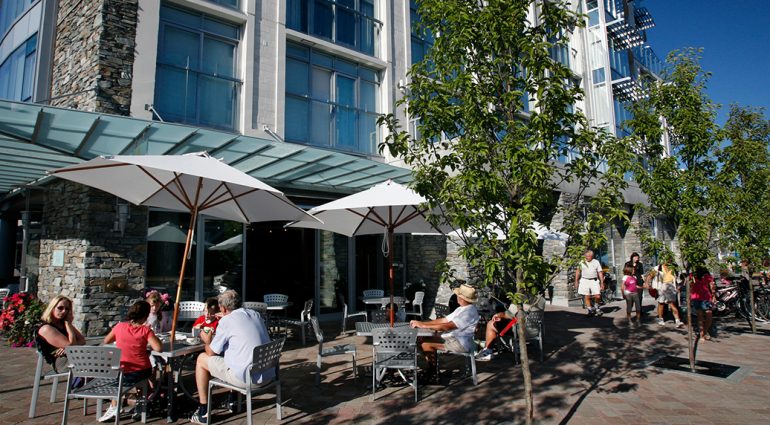 Growing up in Victoria in the 1980’s, Sidney-by-the-Sea, as it is endearingly nicknamed, was just the place where my family occasionally drove to buy kippers – smoked herring for British-style breakfasts. If this small, coastal Vancouver Island town had an image, it consisted of somnolent seniors sitting solemnly by the seaside.

How times have changed. To this day, Sidney has retained its original quaint charm, but the 1967-incorporated town of 12,000 has come alive with intriguing bookstores, bustling restaurants, and exciting opportunities to explore nature.

Sidney is well-placed for either a romantic overnight getaway or a fun family day trip. One of 13 municipalities within British Columbia’s provincial capital, it sits half an hour north of downtown Victoria. It’s just a short drive from both the Swartz Bay ferry terminal and the Victoria airport.

To be clear, Sidney didn’t host the 2000 Summer Olympics. That was Sydney, Australia. Now that we’ve cleared that up, let’s find out how you can write your own consummately Canadian chapter in Sidney’s history.

Since 1996, Sidney has proudly billed itself as “Canada’s only booktown.” Beacon Avenue, the central shopping street, validates that claim. Six independent bookstores within easy walking distance lure readers with new and used books. It’s a far cry from the old days when Sidney centred on sawmills, salmon canneries, and farms producing fruit, grain and cattle.

If you dig vintage volumes, like a 1925 edition of the complete works of Joseph Conrad, Beacon Books is an ideal destination with its nostalgic musty scent and flickering fireplace. The Haunted Bookshop is the oldest antiquarian bookstore on Vancouver Island, and features an excellent selection of children’s classics.

If you know (or are) a crotchety middle-aged man who lives for Tom Clancy and the History Channel, Galleon Books and Antiques and The Military and History Bookshop both deliver the goods.

For a taste of Europe, head to Bistro Suisse on Beacon Avenue, where the specialties include Wiener Schnitzel, bratwurst with rosti, and fondue with Emmental and Gruyere cheese.

The nearby Five and Dime Diner offers a fun retro atmosphere. It serves all-day breakfast and lunch dishes, from Belgian waffles and eggs benedict to pulled pork burritos and “Brain Power Salad” with goat cheese and dried cranberries. A puckish sign warns: “Unattended Children Will Be Given Espresso and a Free Kitten.”

The Sidney Bakery displays an even better sign: “I Don’t Want Buns of Steel, I Want Buns of Cinnamon.” The pink-shirted bakers at this homey establishment magnificently live up to that philosophy. They also make delicious jelly doughnuts and apple fritters.

For a different kind of liquid immersion, the Shaw Centre for the Salish Sea’s exhibits unveil the mysteries of this 110,000-square-kilometre body of water, which includes the Strait of Georgia, Strait of Juan de Fuca, and Puget Sound.

The centre showcases some 160 aquatic species. Jellyfish undulate hypnotically in a backlit tank, while yellowtail rockfish swim in a kelp forest. Kids marvel at the killer whale skeleton and enjoy painting their own marine-themed T-shirts. In the gift shop, you can purchase coffee mugs with Indigenous orca motifs or bags of handcrafted sea salt.

Want another way to explore these coastal waters? Head out on a kayak tour with A Paddle in the Park Kayaking. Keep your eyes peeled for seals, cormorants, and eagles as you paddle along sheltered channels between local islands.

Two other nature-themed attractions lie less than 20 minutes from Sidney. The Victoria Butterfly Gardens is home to some 70 species of butterflies, plus frogs, turtles, and flamingos. The Butchart Gardens, Victoria’s most legendary attraction, features the Sunken Garden, a converted limestone quarry with more than 150 flower beds and the lyrical Ross Fountain. Stroll over the Japanese Garden’s compact bridges and rub the snout of the bronze boar statue at this National Historic Site of Canada.

Year-round, there’s something infinitely soothing about visiting Sidney. For books, food, and nature, this little town is tough to top.