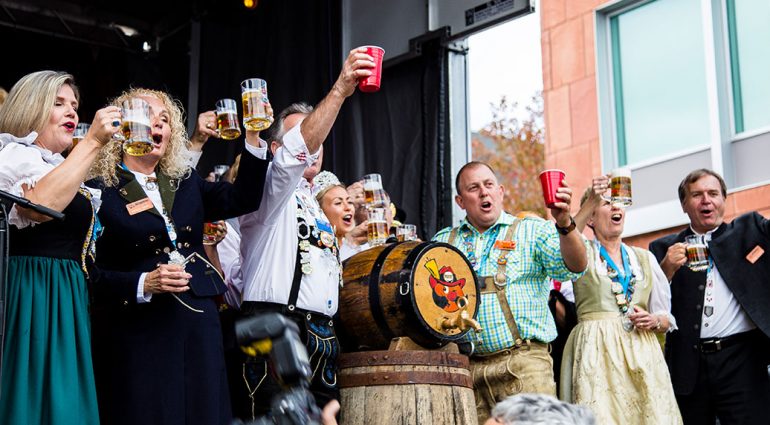 Oktoberfest in Kitchener-Waterloo is a big deal – 700,000 people partake in the festivities, which run the gamut from the obvious (beer, polka and lots and lots of lederhosen) to the surprising and exciting (barrel races, archery, log sawing and human foosball tournaments).

Between gorging yourself on schnitzel and beer, doing the chicken dance and singing along to the Oktoberfest song “Ein Prosit”, there’s so much to explore in K-W during Oktoberfest, you might feel overwhelmed. Trust the locals and their Gemütlichkeit (a German word conveying warmth and friendliness) to guide you through the festival and around town. Here are a few of my personal favourites to help you navigate.

Get Your History Straight

Oktoberfest is known as “Canada’s greatest Bavarian festival” but the German pride lasts far longer than the nine days of the festival. Learn about Waterloo Region’s rich German history at some key heritage spots, like the Schneider Haus National Historic Site , an 1816 Pennsylvania-German homestead, or Waterloo Region Museum, the most comprehensive overview of the region’s history. It’s connected to Doon Heritage Village, a 60-acre living history village that will transport you back in time in Waterloo Region.

Once you’ve learned about the history of the town previously known as Berlin, you’ll be ready to treat yourself to a pretzel (Grain Harvest Breadhouse serves up fresh pretzels daily, year-round).

There are eleven official Oktoberfest festhallen – meaning venues, or beer gardens – which are hosted in local German clubs, arenas and event spaces. Each venue offers a different selection of German food, music, dancing and flair. But these are all the Oktoberfest official venues, which means that they all have the same beers on tap, provided by Molson Coors. To this standard fare they’ve recently added one true Bavarian beer, Erdinger Weissbräu.

If you’re in the mood to imbibe in something different, most local craft breweries have special Oktoberfest beers on tap, or at least a bigger variety.  Try Innocente Brewing Company or Descendants Beer & Beverage Co. Or, head to Abe Erb, which has locations in both Kitchener and Waterloo (and is named after Abraham Erb, the Mennonite founder of Waterloo, so you might get a history lesson while you’re at it. Cheers!)

Looking for a bit of respite from all the oom-pah-pah-ing? Slip into a seat at The Original Princess Cinemas, an independent theatre where you’ll find the best in international, independent and Canadian cinema, plus festival hits, documentaries, mini-festivals, Hollywood classics, cult films and special series. Once you’ve had your break from the crowds, head across the street to the Princess Twin and grab a bite at the Princess Café in the lobby (and note that you can get ooey-gooey Cheeses Murphy grilled cheese sandwiches at the takeout window here on Fridays and Saturdays from midnight to 3:30 am, perfect for post-fest late night snacks.)

Although steins of beer and shots of schnapps are pretty prominent in many Oktoberfest celebrations, there’s so much more to the festival than the beverages. There are plenty of family-friendly events at different festhallen, plus an annual Oktoberfest parade and long-time favourite Bogenscheutzenfest, a family archery event.

You’ll also always find family fun at Bingemans, a large property with different attractions all year round, from a splash park in summer to a holiday lights display in winter. Kids will love FunworX, the region’s largest indoor playland, or the combined pizza restaurant and bowling alley. Bingemans also hosts its own large Oktoberfest party in two different tents, the Kool Haus and Paulaner Haus, where German and local beers flow from the taps. Plus, while the kids are being entertained, parents can hop across the street to Waterloo Brewing, Ontario’s first craft brewer (and now its largest).

Waterloo Central Railway always has something on the go for families, too. Themed train rides abound, from historic steam train rides on long weekends to other special events – think wizarding school, tailored dining or tea events on board, and holiday-themed trains.

If Waterloo Region is known for any one thing in particular now, it’s tech companies. As you move through Kitchener-Waterloo, you’ll notice a slew of factories-turned-tech hubs. The newest example is Graffiti Market, North America’s first-of-its-kind restaurant, retail market, microbrewery, coffee roaster and bakery located inside a bustling space housing tech hardware companies.

Dive into their interactive smart tables and order your meal through your touchscreen table, then switch to the camera to see your meal in the works in the kitchen or play a round of table hockey with your dining companions (kids will love this spot too!) Grab a growler of beer and some roasted-on-site coffee on your way out.

After your first Oktoberfest, you’ll be hooked – make space in your closet for lederhosen or a dirndl (after visiting, you’ll know what a dirndl is!) Plus, there’s so much more to experience in Kitchener-Waterloo, so you’ll need to come back again to keep exploring!