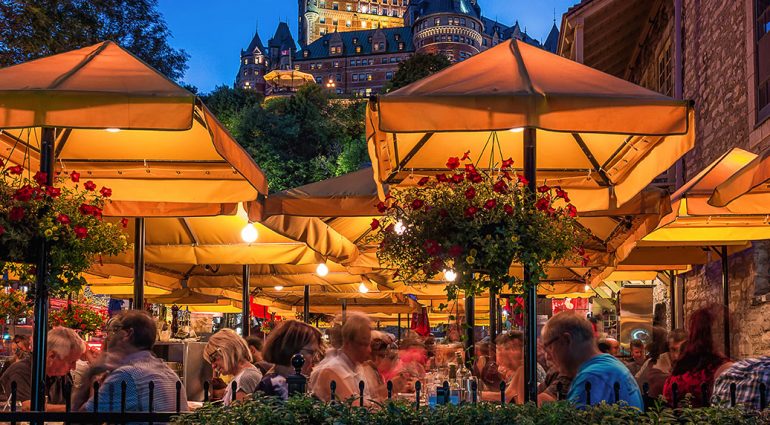 Following their fantastic first trip to Ottawa, Passion Passport joined us for another ride – this time to Quebec City. They toured the city with their stomachs, simultaneously taking in the culinary delights and the sights. With a passion for travel (as their name suggests), camera in hand and an empty belly, PP member Camille’s journey began…

It was lightly drizzling as I made my way through the cobblestone streets of Quebec City, the alleys and avenues lined with trees sprouting vivid green leaves.

I navigated the maze of streets, peeked through the glass windows of Quebec’s most beloved restaurants and cafes, and photographed the colourful facades and intricate street murals, realizing for the first time just how texturally rich the city was, how visually compelling, and how gastronomically appealing.

A Bit of History

But this isn’t news — Quebec City has long been a site of food and culture, beginning in the 17th century with the first influx of French settlers to the indigenous-occupied land. The French became and remained the area’s predominant population, bringing traditional French dishes with them, adopting techniques from Indigenous people, and fusing tradition and technique with ultra-fresh ingredients from the province’s forests, farmland and lakes to create the kind of comfort food that a cold Canadian climate requires.

This has resulted in dishes like poutine, maple-anything (and everything), raw-milk cheese, tourtière, and cretons. The popularity of these dishes has extended beyond the Canadian border and attracted worldwide acclaim. But there’s nowhere better than Quebec City to indulge in these delicious treats, a truth I learned as I munched my way through the city’s many eateries.

And while I could identify the legacy of the early Québécois, I learned that the city is also home to a bright and regenerative food future that is enlivening the city much like the plots of bright spring tulips and stretches of colorful murals I ogled as I hopped from café to restaurant.

Food blogger Allison Van Rassel (Foodie Québec) agreed, noting that “food culture has greatly evolved in Quebec and in a positive way — curious chefs look out into the culinary world without boundaries and young, creative chefs are pushing the envelope in Quebec City on a daily basis. They care about quality, and locally sourced ingredients matter. Today, foraged and gathered foods are more than ever a reflection of the legacy of our First Nation peoples.”

It’s a phenomenon that those in the city embrace and its visitors readily appreciate. Over the past five years, Quebec City has welcomed a good portion of the country’s international immigrants, an increase that has manifested change in communities. That, coupled with an influx of younger cooks has created a new set of rules for food lovers in the city.

Chez Boulay (a beloved restaurant in the city that specializes in traditional Nordic cuisine and Canadian-sourced boreal ingredients), run by 37-year old chef Arnaud Marchand, is a prime example. Boulay team member, Sophie Marchand, echoed the above: that local products, a unique international influence, a young kitchen, and a clear vision helped propel Chez Boulay to the top.

“There’s still a buzz surrounding this restaurant, even six years after opening! We serve Nordic cuisine but with a Canadian twist. What makes us a success is the originality of the products, the value, the freshness of our ingredients, the respect we have for the restaurant’s vision, the chef, and the heart we put into our food.”

Because Quebec City is undergoing a transformation, I was eager (and hungry) to witness it in person. While pockets of the city retain their old city charm and tradition, beyond the walls of Old Quebec, in the off-beat enclaves of Saint-Jean-Baptiste and Limoilou, these new fusions and ideas incubate at places like Hosaka-Ya (enjoy the tiny, wood-paneled interior and be sure to get a Bento box), La Salsa (a charmingly decorated eatery with incredible pupusas), and Cafe Cam Rahn (a tiny space with big Vietnamese flavor — try the catfish!), which offer food from a host of nations under both internationally trained chefs and family run kitchens.

Where some areas remain primarily French, there are thriving communities of Jewish immigrants, as well as Lebanese, Haitian, and Asian populations who are bringing elements of their gastronomic heritage with them, making Quebec City a tableau of diverse food offerings with a Canadian twist.

Whether that’s in the form of some particularly good bagels (even by Quebec standards), Thai-Cambodian fusion with a kick, or vegan dishes inspired by the province’s fresh produce, these dishes acted as a gateway into a greater understanding of Quebec City’s forward movement and increasingly inclusive culture.

If you do visit, do yourself a favour and try Fromagerie des Grondines, a rustic, wood-paneled cheese shop that takes great pride in creating a variety of items from raw milk that have a freshness and tang I’d never experienced prior. At Café St-Malo, a low-ceilinged cafe with comfy booths, a soft golden glow, I had the best French Onion soup of my life.

Don’t miss Le Mezze, a popular site with a cherry-red exterior and a host of authentic Greek delights (try the moussaka!) and Bati Bassak, an intimate city-wide favorite serving traditional Thai and Cambodian curries. From this culinary tour, it was evident to the group of both Canadians and Americans I was travelling with that Quebec City was a broader cross-section of culture, cuisine, and creativity than I’d ever imagined.

Trip ticking to an end, I boarded the train departing Quebec City a little woefully, but with a full stomach and an insatiable hunger to return.

When talented people like Alexandrine and Felix (NUSA Production) tour the country, they do it by rail and they always leave their cameras rolling. We’re sure our food tour blog has left you ready to sink your teeth into a trip to Quebec City — but just to get your mouth watering even more, here is a little taste of what you’ll see there… 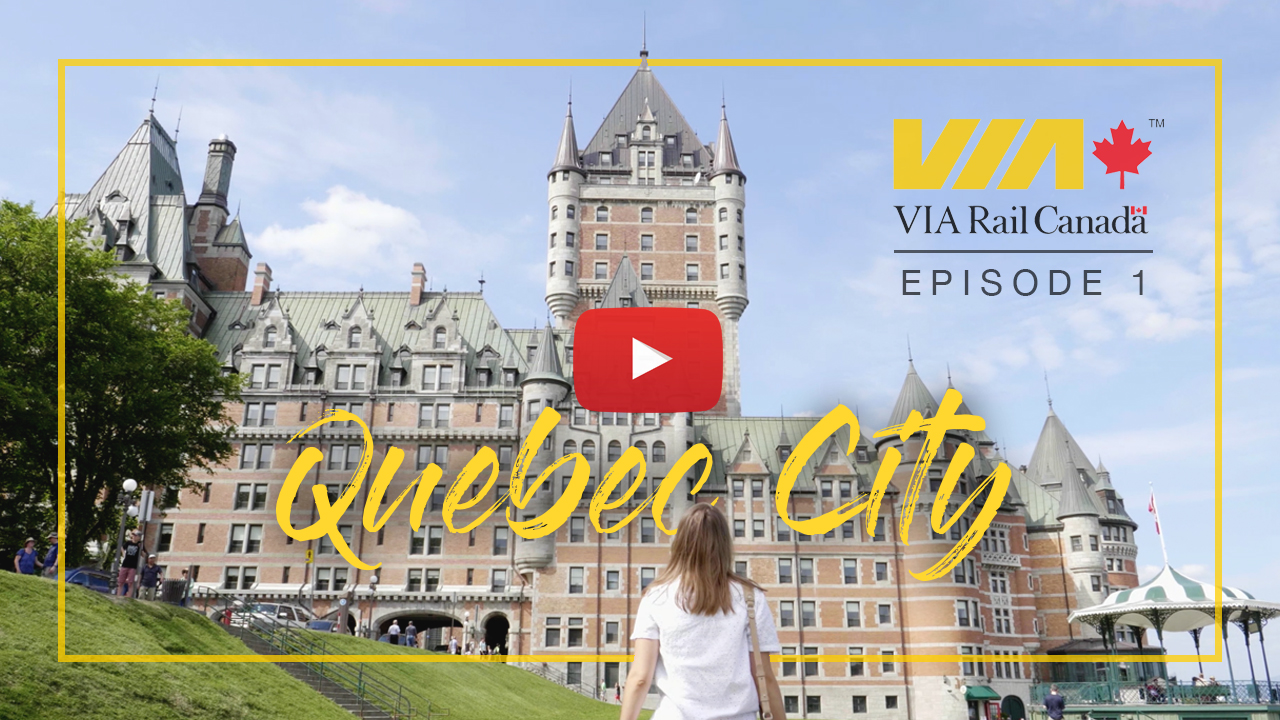