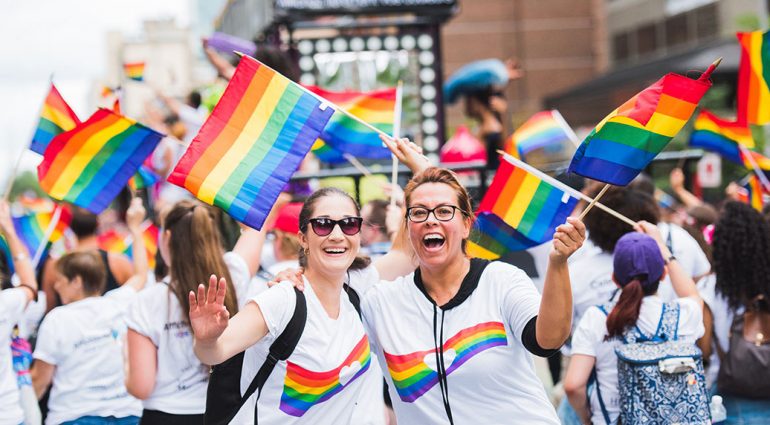 Pride is a time where thousands of people around the world can celebrate who they are and who they love — and in Canada, we do a pretty good job of it. I still remember marching in my first pride event, dressed in green and waving flags on a boiling hot July afternoon in Montreal. Since then it’s is one of the events I most look forward to. Montreal and Ottawa are cities with hidden gems of LGBTQ culture beyond what you can find in this year’s pride programs. So whether you’re looking to dance all night or party every day, pride events have so many different things to offer that you’ll definitely find something fun.

Plus, Montreal and Ottawa are just a short train trip apart — which means there’s no reason not to double up on pride this year. Just make sure you pack enough glitter. Pride has come a long way from its roots as a protest, fighting for rights for LGBTQ communities and there’s no better feeling than seeing so many different people from across the globe come together to celebrate something as wonderful as love!

Fierté Montreal’s opening ceremony kicks off dozens of events happening over the next nine days. The program list is so long it’s easy to get lost, but there are a few things I wouldn’t miss.

If you’ve never been to Montreal, it’s worth taking the time to orient yourself —and heading off on a guided tour of the gay village is a great place to start. You’ll learn some history about the neighbourhood while getting a better lay of the land for your time here.

Montreal’s nightlife is legendary, and you’ll have no shortage of parties, cabarets and DJs. Dancing at the Mondo Disko, catching Big Freedia’s live music show, or watching world-renown drag queens in the Drag Superstars show are all good bets from the official pride programming. But if you make your way to Montreal’s famed St. Laurent Street you can catch the monthly edition of POMPe—a queer electro-punk music and performance art event at Katacombes bar. It’s a cornerstone of Montreal’s fringe queer scene.

If you’re thinking of hopping on the train to Ottawa pride and are looking for something to read on your trip, try the Argo Bookshop in Shaughnessy Village. They’re Montreal’s oldest independent English book store and they have a large selection of queer literature. If you’re like me and are easily overwhelmed in a room full of books, don’t worry; their staff is well equipped to give you suggestions. Plus there’s some comfy space to get some reading done if you need to unwind from the whirlwind that is Montreal during pride week.

Pride Fun in the Capital

Ottawa Capital Pride kicks off the day after Montreal’s parade wraps up. If you roll into Ottawa by noon, you’ll be there in time to see the city kick off the week of celebrations by raising pride flags all over the city.

While Ottawa’s nightlife doesn’t have the same reputation as Montreal’s, there are some great options out there. Try Swizzles any night of the week for a different event— the self-described “bias-free bar” has everything from themed Tuesday game nights to Karaoke on Wednesdays, and a free live drag show on Thursdays.

Otherwise, you can head to the video-game pub Level One on Waller Street. Every Thursday night they host Rainbow Road, an LGBTQ game night where you can eat yummy pub food, sip on a cold beer, and meet new people.

Party at the Museum of Nature

Of course, Capital Pride is offering up some interesting looking parties later in the week — like the Block Party and Pride Pageant—but it’s Friday night’s party in the Canadian Museum of Nature that caught my eye. It’s the pride edition of the museum’s Nature Nocturne where you can groove the night away.

And of course, Sunday is also parade day in Ottawa. The Capital Pride Parade will have more than 150 groups marching in it, and as the home of the Canadian government there’s always a chance you’ll see some recognizable faces in the march. Just make sure to make the most of these back-to-back pride weeks because, unfortunately, they only come once a year!