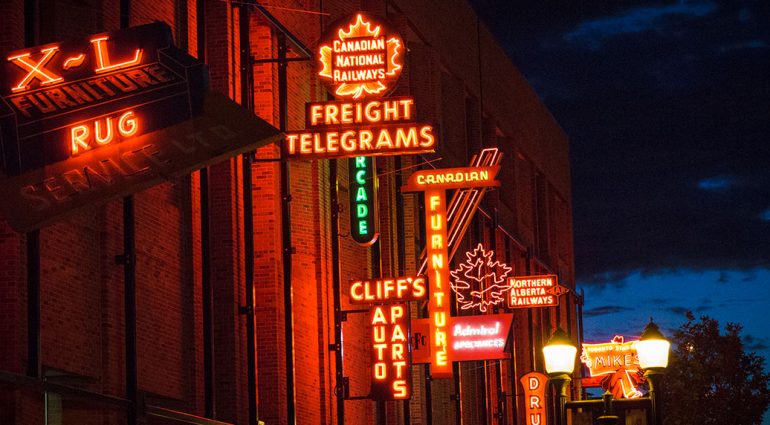 The Canada 150 celebrations of 2017 may be over, but there are still plenty of reasons to revisit some of our nation’s most nostalgic attractions. It’s natural to slip into the warm embrace of wistfulness when, say, you hear Bryan Adams’ “Summer of ‘69” or catch vintage Hockey Night in Canada highlights.

Travelling across this country has helped me to realize that while there’s nothing wrong with watching the Mounties ride past or checking out statues of British royalty, searching outside the box for retro experiences is even more rewarding.

Whether you’re celebrating Canada Day or VIA Rail’s 40th anniversary, it’s time to relive the glories and oddities of yesteryear this summer, rain or shine. Nostalgia takes you back to where you came from, but it can also inspire you with fresh ideas. Here are seven intriguing, quirky places to get nostalgic in Canada this summer.

Some of EXPO 67 (the World’s Fair marking Canada’s centennial year) still remains, like the geodesic dome (now the Biosphere) and the architectural marvel Habitat 67 condo complex. But you can both be nostalgic and create new memories at the Olympic Park from Montreal’s 1976 Summer Games, which has been given lots of love with a recent multi-million dollar renovation.

This landmark site is worth touring for its science fiction-style architectural marvels alone. The 165-metre Montreal Tower is the world’s tallest inclined tower, and is a great place to view the city panorama. In the gift shop, score a T-shirt featuring Amik, the black beaver Olympic mascot.

Insider tip: bring your swim trunks. Not everyone knows that you can also go swimming at the Olympic Stadium Sports Centre, where Canada captured silver in the ‘76 men’s 4×100 relay. It includes seven pools, one of which turns into a kids’ version of “Wipeout” on Sundays, plus training gyms. Food truck festivals and concerts at the Olympic Stadium also jazz up the park nowadays.

If you revel in Cold War-era Hollywood movies like Seven Days in May or WarGames, replete with nuclear brinksmanship, the Diefenbunker is a must-visit.

This National Historic Site, 30 kilometres west of Ottawa, is a former nuclear shelter for the federal government, decommissioned in 1994. Officially christened as CFS Carp, the underground, four-storey bunker takes its name from (you guessed it) Prime Minister John Diefenbaker and is now a Cold War museum.

Roam the dimly lit corridors, gape at the retro computer equipment, and explore rooms such as the Prime Minister’s suite and the CBC emergency broadcast studio. Memories of this not-so-distant era will inspire you to seek a peaceful future.

Canada has admittedly never rivaled Germany or Japan as a car manufacturing mecca. But did you know that in the early 20th century, this country produced some classic vehicles? Head to the Canadian Automotive Museum in Oshawa – a city where GM has built cars since 1908 – to admire beautifully preserved specimens like the 1903 Redpath Messenger, the 1910 McKay Roadster, and the 1937 REO Pickup Truck.

At this 1962-founded, 25,000-square-foot museum, you may wind up feeling wistful that domestic car production dwindled after the 1930’s. The collection of more than 60 vehicles also includes vintage American and European cars.

Nostalgic for those giant cathode ray tube TV sets of your youth? The MZTV Museum of Television will not disappoint. Located in Toronto’s Liberty Village, this intriguing museum founded by Canadian television mogul Moses Znaimer (think CityTV and MuchMusic) showcases vintage TVs from the 1920’s to the 1970’s.

After my first visit to Edmonton’s new Rogers Place to watch the Oilers facing the rival Calgary Flames, I stared in amazement when I came out and spotted the Neon Sign Museum.

This free outdoor exhibition boasts some 20 classic, restored signs from the Alberta’s capital’s glittering past. They are featured along the 4th Street Promenade and each one’s story is explained with its own plaque. From the gorgeous blue ellipse of the Bee-Bell Health Bakery sign to the torch-like red paintbrush of The Art Store sign, there is much to admire, both by night and day.

This is a young city, but emotional reveries come easily at the waterfront Museum of Vancouver. Its roof resembles a traditional cedar basket hat, and Indigenous culture takes centre stage at special exhibitions like Haida Now, with richly textured silver bracelets, bentwood boxes, and other artifacts.

The lively and inspiring permanent collection includes everything from a 1950’s jukebox to classic shots of 1960’s hippies in Vancouver’s now-gentrified Kitsilano neighbourhood. Also, get starry-eyed by watching an immersive film on meteors, black holes and other ancient celestial phenomena at the H.R. MacMillan Space Centre’s Planetarium Star Theatre, located in the same building.

Tucked away on the north side of Victoria’s Fairmont Empress Hotel, Miniature World offers a delightful blend of kitsch and artistry in the British Columbia capital.

Winnipeg Classic Rockfest, Winnipeg: Launched in 2017, this one-day festival at the Shaw Park baseball stadium is a perfect chance to punch the air with old-school Canadian rockers like Tom Cochrane and Kim Mitchell.