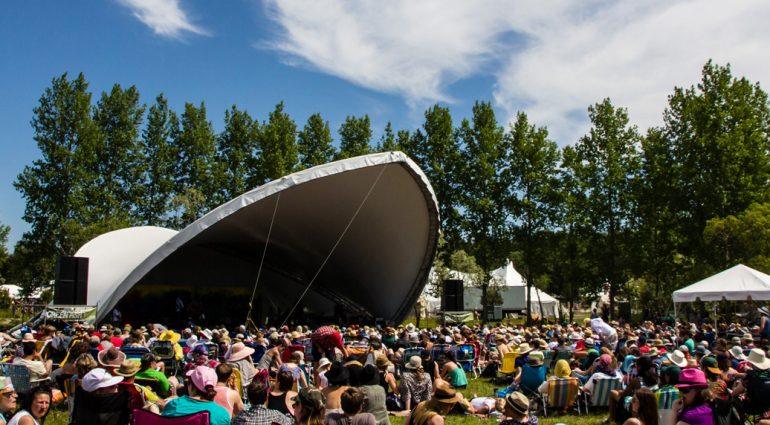 The Winnipeg Folk Festival is a treasured tradition for thousands of Winnipeggers and visitors alike. Celebrating its 45th year, it draws attendees of all ages. But aside from the festival, there’s no shortage of summer activities in Winnipeg. We’ve rounded up fun things to do in Winnipeg as diverse as the Folk Festival’s varied musical lineup and its audience.

First things first: get your bearings by seeing the city from the water. Downtown Winnipeg is situated at The Forks for good reason: it’s where the Assiniboine and Red Rivers meet, so it has been a trading and gathering place for 6,000 years. On land, there’s lots to explore at The Forks – shopping, dining, parks and trails, and the new pride of the skyline, the Canadian Museum for Human Rights – but the view from the water can’t be beat.

Splash Dash tours runs a water bus service in July and August, a legitimate mode of transportation for Winnipeggers but also an inexpensive way to travel between neighbourhoods and get a river view in one. They also offer canoe rentals so you can paddle on the Assiniboine River yourself.

Two pop-up parks are coming to Winnipeg this summer: at Hargrave Street and Portage Avenue and Kennedy Street and Graham Avenue (just two blocks from the Folk Festival Express free shuttle). These temporary parks extend the sidewalk space for public use and are expected to include table tennis, chess, checkers, pianos and outdoor furniture so they feel like someone moved their living room right out to the curb and invited all the neighbours over.

If you prefer to kick your feet up streetside with a drink in your hand, try patio crawling around Corydon Avenue, which used to be known as Winnipeg’s “Little Italy” but is now a destination for shopping, dining and people watching (don’t worry, you can still find gelato there!)

If you haven’t had your fill of the arts at the Folk Festival, you’ll find plenty more music, theatre and visual art in Osborne Village. Lately, it’s also gathering popularity for its slew of hip restaurants, trendy dive bars and shopping options. Start by checking what’s coming up at The Gas Station Arts Centre, an intimate theatre and gallery supporting multidisciplinary arts.

Hungry? Sherbrook Street is a local favourite for good food – and it also happens to be walkable from the Folk Festival Express stop. Grab some pre-festival breakfast at Stella’s or The Nook, a hearty sandwich at Cousins Deli & Lounge or, post-festival, take in more live music at The Handsome Daughter – all classic Winnipeg joints.

Winnipeg’s Exchange District is a National Historic Site of Canada. It’s lined with over 150 heritage buildings built between 1880 and 1920 that were once warehouses and financial institutions but now house the city’s hippest design and architectural firms, galleries, shops, studios and start-ups.

Make the tough choice between new themed historic walking tours: Art and Architecture, Winnipeg’s Wonder Women or Punks & Anarchists, to name a few. When you’ve worked up a thirst, head to Forth, an artsy coffee/cocktail bar with lots of space to spread out inside plus a rooftop patio, or grab food at local favourites King + Bannatyne, Bronuts or Chosabi.

From the Exchange District, it’s easy to walk to the Esplanade Riel pedestrian bridge and over to Saint Boniface, Winnipeg’s French Quarter. Grab coffee at Café Postal and continue your tour of Winnipeg architecture, particularly the Saint Boniface Cathedral, where a smaller church is built in the shell of the old stone cathedral that burned down in 1968. Out front, you’ll find Louis Riel’s resting place.

Sanctuaries in the City

Find refuge from the sun at the Winnipeg Art Gallery, which is celebrating the Impressionists this summer, or at the Manitoba Legislative Building, topped by its iconic Golden Boy. Recent research has uncovered some surprising secrets that have been hiding in plain sight at the Legislative Building since it opened in 1920. Take a Hermetic Code Tour on site to dive right into them.

Keep your eyes peeled for the Resilience Project produced by Winnipeg artist-run-centre, Mentoring Artist for Women’s Art (MAWA). The project “responds to Call #79 of the Truth and Reconciliation Commission report, which encourages collaborations among Indigenous peoples and the arts community to develop a framework for Canadian heritage and commemoration.” Eighty-one different billboards are hung across Canada, seven of which are in Winnipeg proper.

Grab a cold one — or two

Winnipeg’s beer scene is having a growth spurt. Its microbrewery population has increased from two to 12 in the past two years and even more breweries are opening this summer. Winnipeg Trolley Tours offers an Ale Trail tour, and you can also grab a flight of different brews at The Common in the Forks Market building.