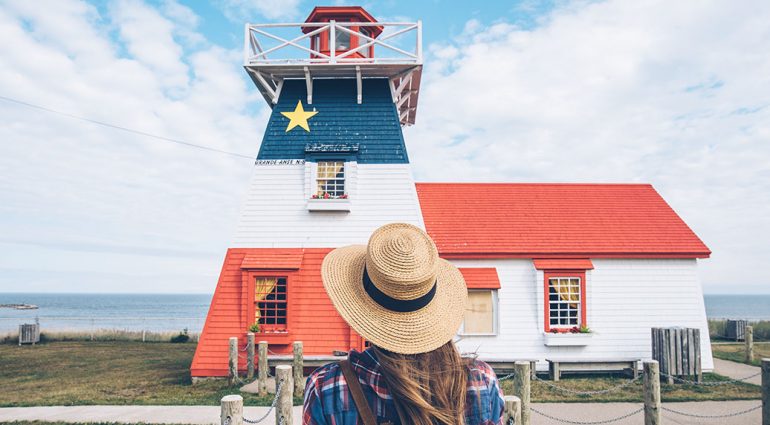 Though the Rockies attract all the paparazzi, the Maritimes offers one of the continent’s great train rides. I’ve taken the train through the major stops, like Halifax and Moncton, but the real surprises have been in the smaller stops, like Matapédia, Quebec, and Bathurst, New Brunswick. I’ve written about all the rest, and it’s about time I let you in on the secret charms of Bathurst.

The train will drop you off in what’s known as West Bathurst, separated from downtown by the Bathurst Basin. A lot of the local infrastructure is here – the Walmart, the McDonald’s, the rec centre, which makes it a good spot for locals, but of less interest to visitors.

But West Bathurst is also where you’ll find the car rental spots, and there are some spots worth visiting that require your own set of wheels. Brunswick Car & Truck Rentals is the local indie option, and Peter will be happy to pick you up if you call ahead to make sure he’s got a car for you.

If you take Queen Street over the Basin into the centre of town, the first hotel you’ll hit is the Best Western. It’s also the only hotel in central Bathurst (there are a few more in West Bathurst), and walking distance to what there is to see in Bathurst, like La Promenade Waterfront, Coronation Park, and the Bathurst Heritage Museum.

La Promenade is the town square, with a gazebo, restaurants, and shops like the Librarie Pelagie. The park is the city’s other centrepiece. It’s where kids go to summer camp, and bands play on Canada Day. It’s also the best place in town for a sunny-day stroll. The museum is on the north edge of the park in a mod 1967 building.

As the museum says itself, “there is no precise theme running through the museum”; it’s more an ambient experience, as you wander past bits and pieces of life in Bathurst and on Chaleur Bay over the years.

Bathurst, the biggest city on New Brunswick’s north coast, has got some great history to it. Settled as a village in 1826, Joseph and Samuel Cunard, founders of the shipping company behind such ships as the Lusitania, the Queen Mary, and the QEII, bought land around Bathurst in the early 19th century, drawn by the timber and the easy access to the bay.

Bathurst was also home to the Bathurst Power and Paper Company, which evolved into Power Corporation, one of the country’s corporate powerhouses. The aforementioned Heritage Museum has a great archive for those who want to dive deeper into the history of this area.

Bathurst is at the centre of one of the nation’s greatest natural wonders and top of the list of fun things to do in Bathurst: Chaleur Bay. And this is where the car comes in. I’ve taken a lot of trips in my life, on most of the continents, but a family trip I took around New Brunswick’s warm coast ranks among the very best of them.

Mostly, I remember the geoduck. We had stopped at a little inn west of Bathurst and for some reason, there was a geoduck in a bucket on the verandah where we’d stopped for lunch. I’d never seen one before, and it’s huge, hyperactive leg fascinated me when someone took it out of its water briefly to play with it on the table.

Aside from my run-in with this charming bivalve, it was the afternoon, as it drew into early evening, looking out over the bay as the light changed in the warm summer air that I remember most. The Bay of Fundy, on the other side of the province, gets most of the hype, and while its tides and ocean life are impressive, it’s Chaleur Bay where New Brunswick’s real beauty lies. Dotted by towns and villages with populations about the same size as they were a century and a half ago, this is New Brunswick at its truest.

Chaleur Bay is one of the few places you can still spot right whales, one of the rarest with only around 400 known still to be swimming. There are whale watching outfits you can hire to take you out and increase your chances of seeing a right, or a fin whale, sometimes called the greyhound of the sea for its lithe proportions and great speed. You can also just sit on the shore, maybe beside the lighthouse at Grande Anse, about 45km northeast of Bathurst.

If you go about 75km in the other direction, you’ll run into the village of Charlo. There are little restaurants, and inns with dining rooms, all along the south shore of the bay, but Le Moulin à Café is one of the more charming, with its seafood chowder and gumbo, its scallops alfredo served behind its small brick and clapboard façade. Owner Andréa Boudreau and chef Ashley MacNair have made this small café in this tiny village a culinary destination.

If I’d stayed on that porch a little longer, I might have seen the fabled “Bay Chaleur Fire Ship”. Some say it’s igniting biogas, others that it’s St. Elmo’s fire, others still that it’s the ghost of a burning ship from the Battle of Restigouche, the final sea battle between the French and the English in 1760. Whatever it is, though, this flash of light on the horizon is real — rare, but real — and a reason to sit on that terrace or beach just a little longer, looking out over the calm waters as the sun sets on a day well spent.