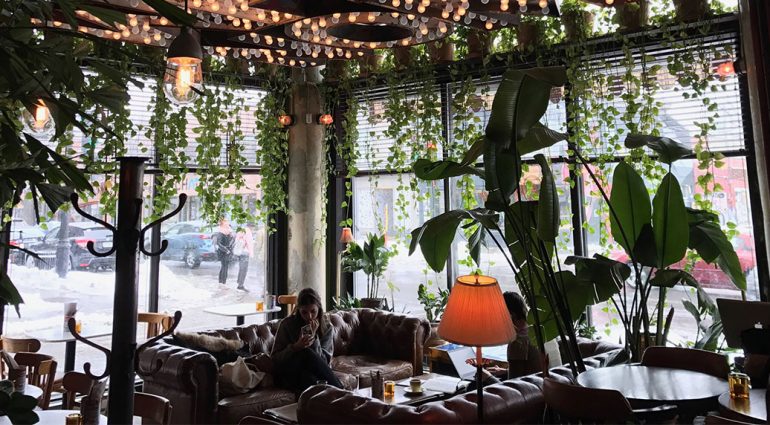 Who among us has not woken up in a new place (or headed out on the town) and immediately turned to their phone for help finding a great coffee or craft beer? “Hey Siri! Find cafés near me! Hey Siri! Where are the pubs around me?”

A rarer phenomenon, though, would be finding a place that offered both. How about grabbing a cappuccino in the morning, sitting down to work, and then at the end of your “office hours”, switching to a craft beer? And all this without leaving the table you’ve posted up at.

Sure, it sounds at first like it makes little sense. Why perk yourself up with caffeine only to chill yourself out with booze? Well, because you at night is different than you during the day. One of you is all about getting things done. The other you is all about having some fun.

Enter what we’re calling the crossover café. These spots around Canada are part of a growing trend that combines these two liquid indulgences. So sit down and get to work… and then loosen your tie and kick back.

Spade just opened on Vancouver’s Commercial Drive at the end of last year. It’s the new project of Sammy Piccolo, owner of Prado Cafe, four-time (!) Canadian barista champion, and a world latte art champion. Spade is Piccolo’s take on an Italian coffee bar. In the morning and afternoon, you can grab espresso, snacks, and sandwiches. Then there’s an early evening happy hour with cocktails like their espresso martini and the Spade Old-Fashioned, which is made with fernet. And then the dinner service starts, with the kitchen—helmed by chef Kathleen Pearce—serving up dishes like porchetta and roasted cauliflower.

The shores of the Pacific have a rich relationship with coffee, of course—it was in Seattle that global caffeine superpower Starbucks was founded. They’ve also expanded the crossover café trend in the great white north, with Starbucks Reserve locations in Toronto, Ottawa, and Vancouver serving up liquor along with regular Starbucks fare.

Moving east, to the (mostly) wide open plains, Gravity Espresso & Wine Bar in Calgary’s Inglewood neighbourhood is quite clear about what’s on the menu. But Gravity is also committed to showcasing artists. They’ve recently hosted a photography exhibit, and regularly present local and touring musical acts to add a little extra vibe to the already stylish spot. Live tunes are always better with a brew in your hand, of course, and they’ve also got a nice list of Alberta and B.C. beers to complement the music.

Forth, located in Winnipeg’s historic Exchange District, is also all about the entertainment. Live music is a regular staple here as well, but they also host film screenings and performance art events. They’re known as much for their boozy drinks as they are their coffee, and even host cocktail workshops that can help you learn to make tasty drinks at home. It’s a perfect spot to work, chill, and party in the river city.

Just off Toronto’s bustling Spadina Avenue lies a little brightly coloured building that houses Sonic Bar & Café, close to Chinatown and hippie haven Kensington Market. Sonic is a sweet little spot that does artist showcases, live music, and even hosts pop-up shops on occasion. On top of craft coffee, you can also grab a local Ontario beer, and whiskey specials are quite regular here. Plus, if you bike on over and pop a flat in the process, they’ll lend you the tools to fix your ride.

In the nation’s capital, Origin Trade works with local suppliers to provide food from Ontario farms, wine from local wineries, and beer from local breweries. They also host open mics, if you’re feeling brave and talented, and every Friday night is Origin Beatz, which features an in-house DJ serving up the sweet sounds of acid jazz.

If there’s one place in Canada that you know is going to get the café experience right, it’s Quebec. And Montreal is the home of Darling, celebrating its one year anniversary this month. The highly Instagrammable spot on the Main opened last year thanks to some seasoned hospitality industry vets (also behind Le Majestique and Waverly), and it swiftly became known as one of the neighbourhood’s most beautiful places to grab a coffee or a cocktail.

It’s got a timeless feel that creates the perfect atmosphere for both day and night, with a round, brass bar, sprawling plants, and just the right amount of kitsch. They carry a nice selection of craft beer and ciders too, that pair up well with meats (from the local butcher shop) and Quebec cheeses on their menu.

One thought on “Crossover Cafés: Mixing Coffee Culture and Nightlife”