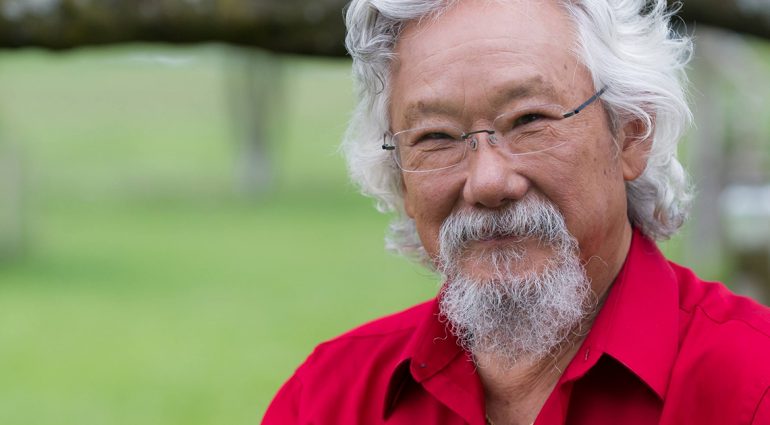 “This is a travel blog”, I explain to David Suzuki, as we begin our interview, “it’ll be about your most memorable trips in Canada,” though I should know better. Anyone who follows David Suzuki’s work also knows that you cannot separate the man from his passions,and protecting Canada is one of his greatest passions. In fairness, that is also why Canadians hold him in such high regard.

I have been a fan of the science-touter since my youth; growing up in Canada meant growing up with David Suzuki, who helped us all learn about (you know I’m going to say it) the nature of things.  In my family of mathematicians, lawyers and other logical thinkers, he just made sense.

As a host, David Suzuki was sincere and composed as he explained the elements of life and science to us, his eager audience. But off-screen he was, and is, the fervent voice of Mother Nature, protector of the environment – even early on, when it wasn’t such a “hot” topic (horrible pun intended).

I was thrilled to be given an opportunity to chat with David Suzuki, but if I thought I was going get away with only talking about travel, well, I was fooling myself.

I heard that you took the train recently?

I did. My nephew was getting married to a Prince-Edward-Island girl last summer. So my wife and I, our daughter and her family, including two young boys, flew by plane to Toronto, took the train to Montreal, then went overnight to Moncton – and the boys had a wonderful time. And to me, this is the potential of rail travel. It’s a wonderful way to travel.

For me the railway is epitomized by The National Dream. You know, the Pierre Berton book that basically said that the railway made Canada what it is […] and the railway really was that link that tied the country together, so it’s deeply embedded into our 150 years of history.

What do you see as our greatest opportunity for positive change?

If we go back and look at our history, we evolved as a two-legged furless ape in Africa 150,000 years ago. We weren’t fast, we weren’t big, we weren’t strong, and we didn’t have special vision or hearing. Compared to the other animals we weren’t very impressive and yet we’ve taken over the planet. How did we do that? Well of course the secret was a brain. And one of the things it invented was this idea of a future. I believe foresight was the big advantage that we had— that ability to look ahead and measure the impact of what we’re doing today into the future.

For over 40 years, scientists have been telling us that we’re going down a very dangerous path we’ve got to get off. And now what you find is economics that block us from doing what we did for 150,000 years: looking ahead and seeing where the dangers are.

So as individuals, what can we do?

There are lots of things we can do — one is giving up meat for one day a week, that’s a start. But, too much is being left to the individual. We need big decisions now. Those decisions we put in the hands of politicians because we elect politicians to make those big decisions on our behalf.

If you care about our future, if you believe that environmental issues are important, get out and start telling politicians that. Keep putting the pressure on the people we elect to look out for our future.

You went to study in the USA, but then came back to Canada. Why?

I loved the time I spent in the United States, I got an education I couldn’t get in Canada at that time and the undergraduate school that I went to, a very elite school, believed that foreigners added to the education of American students. So even though I was a foreigner, they gave me a big scholarship.

Because my parents got married during the Depression in Canada, and because of [their] experience they always said, “Live within your means, save some for tomorrow, share – don’t be greedy.” You don’t run after money, as if having more money makes you a more important person.

But in the states, people love money, and I just didn’t like that culture. Canada was different. […] We had Medicare, we had equalization payments where the richer provinces shared their fortune with the poorer provinces and I loved that. We had the CBC and the National Film Board, we had Quebec. And to me those things made Canada different, and I preferred to live here.

Coming back to Canada meant we’ve benefitted from many years of The Nature of Things.

I’ve been very, very fortune to have become a part of The Nature of Things. I did my first television series in 1962. And that’s when I realized television is a powerful way to educate people.

Do you have any episodes that really stick out in your mind?

I have lots. But one of the most important ones for me personally was a two-hour special on the Amazon. It was a big show and it got me and my wife involved with working with the indigenous people in the Amazon, and that was for us one of the real great experiences of our lives.

Did you do anything to celebrate the 150th anniversary of Canada?

I gave a speech in the Senate in Ottawa at the invitation of one of the senators, Serge Joyal. He held a two-day conference in Ottawa, in the Parliament building about Canada and 150 years. You had all kinds of people like Adrienne Clarkson, Kim Campbell, very eminent people spoke and the thing that was really tragic was that the place was half empty.

But to me 150 years is not a celebration of Canada; what I celebrate is, despite everything done to Indigenous people, they’re still here. And what we’re recognizing is that they have an attitude toward land and place that we the settlers have got to rediscover from them.

Having travelled all over Canada, what stands out to you as one of the most unique landscapes?

I think that Canadians have no idea how privileged we are to occupy this part of the planet. Of course the Arctic is iconic. Most Canadians will never go to the Arctic, but they really feel that the [it] is an important part of who we are; which makes the warnings that climate change is happening, very important to us.

I’ve stood in the delta of Lake Winnipeg and I’ve been amazed at the migration, in the fall, of flocks and flocks of geese and ducks … at any one time if you look up you can see 10 to 20 different flocks flying and they say that 100 years ago the sky was almost black with waterfowl.

We are a wonderful country in terms of our natural abundance.

What can we do help preserve that natural abundance?

My concern today is that we’re not getting outside enough. Apparently the average Canadian child spends 8 minutes a day outside and more than 6 hours a day in front of a TV, cellphone or computer screen. And that really disturbs me because you only worry to save the things that you love. And if you don’t go outside and fall in love with things, I don’t see how we’re going to deal with the environmental crisis. We’ve got to go outside and fight to protect those things because they’re the most important part of who we are.

This interview was edited for clarity and length.