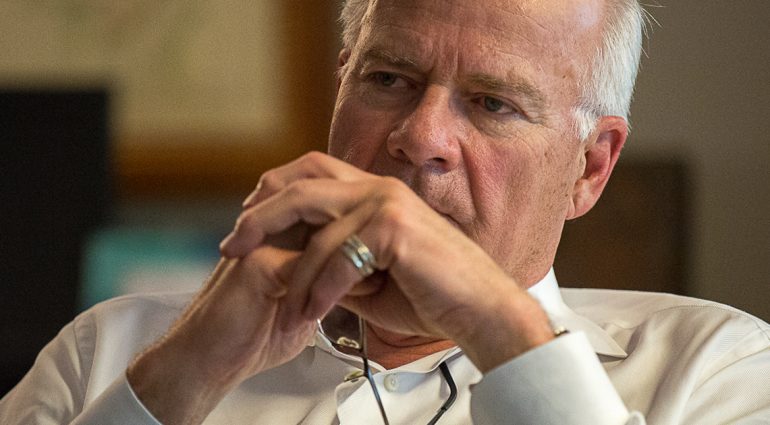 Peter Mansbridge. To Canadians, his name goes hand-in-hand with our national broadcaster, the CBC, and is practically synonymous with Canada itself. Many of us can’t imagine watching the news without his reassuring presence, but following his 50-year career at the CBC, 30 as the anchor of The National, he said his goodbyes live on air, during the Canada 150 celebrations on Parliament Hill. I’m not sure it gets more patriotic than that.

With his work ethic and desire to “strike to the heart” of issues that matter most to Canadians, I’m sure it won’t be long before we see Peter Mansbridge on our screens again. In the meantime, the humble icon allowed himself to be in the hot seat for once, telling me about his most memorable interviews, about living in Canada, and more.

Where do you feel most at home right now? And where are some of your favourite places to visit?

I feel most at home in Canada. You know, there’s such a variety of places to pick from that it’s kind of unfair of me to suggest where my favourite place to travel inside of the country is, because I literally have been almost everywhere. This summer I was in Cape Breton and managed to explore a part that I hadn’t been to before— the Inverness area — and golfing at the Cabot links and it was spectacular.

I use that term loosely. I play golf. It would be wrong to say that that means I’m a golfer. [… ] I’ve even played in the arctic. I love golf. I’m not very good, but I love playing.

Right now you live in Stratford. Do you have any recommendations for anyone who hasn’t been to Stratford before?

Well Stratford is mainly known for the theatre, the Stratford festival. It is a great, world-class festival, so obviously the festival is kind of number one. But it’s a beautiful community and it’s home to the Stratford Chefs school.  There are a lot of great chefs, not only in Canada but around the world who have had their basic training as chefs in Stratford. So it also means there are a lot of great restaurants in Stratford.

I see that you’re a Winnipeg Jets fan.

The Winnipeg Jets fan and the Leafs – I’ve lived in both communities. I grew up in Eastern Canada, in Ottawa. That was before there was an Ottawa Senators team so I grew up as a big Leafs fan and I’ve never lost that. But I also spent 10 years in Manitoba and the first incarnation of the Winnipeg Jets, so I’ve always been a Jets fan as well. In fact, last year I had season tickets in both cities.

What does it mean to you, that you built your career in Canada?

I’ve spent a lot of time thinking about this …. But I think it says more about them than it does about me; there’s a certain continuity that viewers like no matter what network they watch. Just knowing that the same person that’s been there, helping guide [them] through different stories over the years, was special to them, and when that suddenly disappeared they felt emotional about it.

I would say I think people are looking for a trustworthy resource and you have provided that.

That’s very kind of you, I appreciate that.

Is there anywhere in Canada that you would like to go?

I’m trying to connect to places that I haven’t been, but there aren’t many. I’ve been to every city and most communities of any size across the country. You know I’ve been to all the provinces and all the territories. I’ve been in remote places, and crowded places. I’ve been through the Northwest Passage. I haven’t stood on top of the highest peak in the Rockies, so maybe that’s still something I need to accomplish.

Are there experiences or places that you highly recommend in Canada?

I started my career in Churchill, Manitoba. I lived there for three years and it was hard to leave. It’s a tiny town, I think there are roughly about 1,000 people there, but it has all kinds of interesting things to see.

It sounds a bit worn out, but Niagara Falls is a pretty remarkable place to see all these years later. I find Newfoundland a wonderful part of Canada. Newfoundland and Labrador, those small outports; you can drive for days and never get tired of the sites you’ll see. I find it incredibly rewarding as somewhere to travel.

The diversity of our nation, not just in its people, but in its sights is something we can be extremely proud of and others are extremely jealous of.

What are some of your most memorable interviews?

I love the interview I did with Brian Wilson from the Beach Boys. That’s one of my favourite interviews, because he’s very different, old Brian.  Bobby Orr was a wonderful interview about his life. And there are interviews that strike to the heart; the Gordon Downie interview was pretty special this past year.

There are interviews that strike to the heart of some of the issues that still confront us as a nation and I’m talking especially about the Indigenous issues. I did an interview with Cindy Blackstock* and it’s an incredibly revealing interview about what still needs to happen in our country.

And I did one this year with a doctor from Prince George, British Columbia, Nadine Caron. She’s Indigenous and the first female surgeon [of First Nations descent] in Canada. The idea of that interview was to talk about the challenges facing healthcare for indigenous Canadians…but it turned into an interview about issues surrounding racism within the healthcare system and it was amazing.

I find often that the interviews that have the greatest impact are with people that no one’s ever heard of before.**

Your final broadcast was during Canada 150. I’m trying to get a sense of what it felt like for you on that day.

Because I had announced a year ago I was leaving, there was this kind of long drawn out goodbye. There was a mixture of relief and emotion on that final day. […] It took a while to accept that it was suddenly all over.  You know I’ve worked awfully hard, especially in the last few months, I never really had time to think about it too much and then suddenly it was done.

**These Mansbridge One on One interviews are available to view right now on all trains between Windsor and Quebec City through the On Train Entertainment system! Connect through the on train Wi-Fi.

2 thoughts on “One on One with Peter Mansbridge”