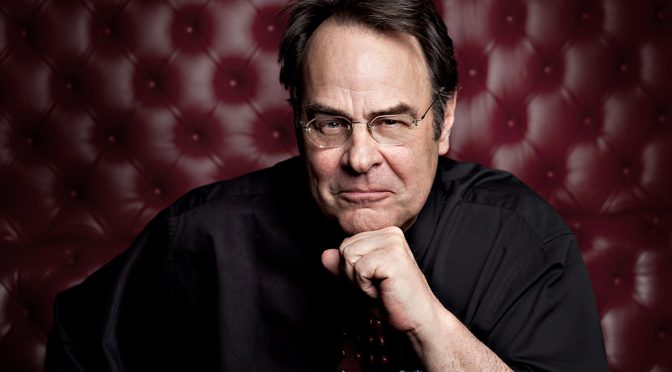 Thanks to Trading Places, Blues Brothers, and countless SNL sketches (which I can’t legally link to), Dan Aykroyd is an international icon, but he is still a proud Canadian who stays true to his roots.  In his own words, he was “born in Ottawa, Ottawa General Hospital, 1952. July 1. My grandfather was a Royal Canadian Mounted Police Staff Sargent and my mom is French Canadian. We were a Loyalist family that came up in 1810 to stay loyal to the crown.” Does it get more Canadian than that? In case you missed it: the man was born on Canada Day. 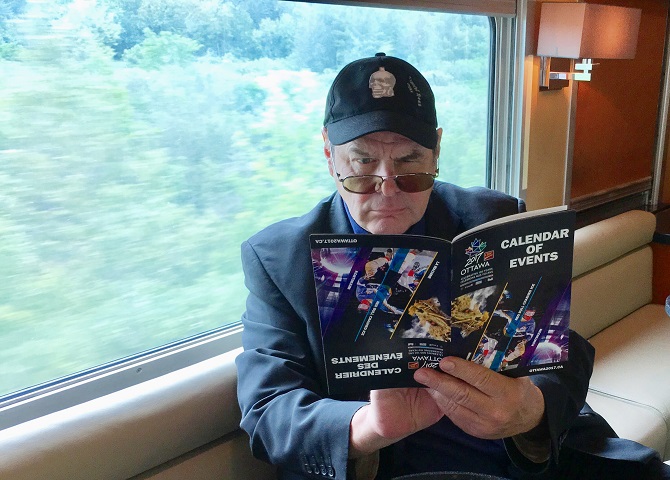 Between posing for photos with everyone who asked (like every good Canadian, he is very polite) and passing out cocktails, Dan (Dan!) took the time to answer some questions about his hometown, Canadian movies, and railroad history.

Q: What are your favourite Canadian projects that you’ve worked on?

DA: One of my favourite Canadian movies is the one we made about the Arrow [called The Arrow – Ed.].  I love that film.  That was so well done. I loved working on that.  I did some narrations for A Nation Soars.  It’s about the Wings [of Canada] and the development of aerial photography and the role of Canadians in World War I.  And there’s two pieces in that that I narrated and I’m really happy with the way it turned out. Discovery Channel is doing The World Without Canada.  So hilarious! You realise there’s a lot of stuff that we’ve given the world.  I hope it gets exposure in the States. You know it’s going to play across Discovery Channel in Canada, but I really hope it gets exposure in the States.

Q: What are your favourite Canadian movies?

DA: Oh! Going Down the Road of course, the wonderful story of interprovincial immigration. I love Passchendaele, Paul Gross’ film.  It was really well done. I really enjoy his work as a director and film maker. It was a spectacular, ambitious, and well done piece, with the love story as a thread, it was very well crafted. [I’m] certainly hoping that that kind of thing gets more exposure. The Apprenticeship of Duddy Kravitz. I guess you could say it’s Canadian because it’s Mordecai Richler.

Q: What do you like to do when you go back to Ottawa?

DA: I go back every summer and every autumn to drive the Gatineau Parkway, because I watched it being made.  My father was the chief engineer for the National Capital Commission charged with the supervision and administration of the construction of that parkway, so as a kid I was on bulldozers and dump trucks watching him blast through that granite mountain to get up to the Champlain lookout. When he worked there at the NCC, they would lock the parkway in the fall and open it in the spring.  Well I had the keys on my Dad’s desk! After it was closed in the fall, we would open it up and go and race cars up there from one end to the other.

Q: What are your other favorite places in Canada?

DA: I like to tour in the summer on the bike [his Harley – Ed.] I love the 1000 Islands Parkway.  I’d like to do a houseboat on the Rideau River at some point, like from Kingston.  I like Halifax a lot, PEI, Newfoundland, where we make the vodka.  Love Saskatoon! The people there are wonderful, really neat people, really relaxed people.

DA: The thing is about Crystal Head Vodka, and why it’s a quality product, is that there’s no additives in it.  No lipid glyceride additives, which is a fatty, sweet thing that they put in there to mask the flavour a bit.  There’s no fragrance, no limonene, no turpene, no sugar.  Bartenders are going to be adding stuff any way.  It’s a blank canvas for making cocktails, so there’s beautiful things you can do with it.

Q: Do you have a favorite cocktail to make with Crystal Head?

DA: I would say, since we’re on the car here, travelling the rails, the best way to appreciate the Crystal Head is to drink it just clean in a clean, pure martini.  I call it the “Long Island Rail Road Commemorative Bar Car Martini” [recipe below! – Ed.] because two years ago the Long Island Rail Road stopped serving alcohol on the rail road. In the 1950s, if you were a Madison Avenue executive reading the Wall Street Journal in your grey flannel suit and fedora, you could be served a martini at 10 or 11 in the morning by a bar steward with white gloves that would have been like two and a half ounces of vodka, a rinse of vermouth in the glass—a tumbler—and then shaken on ice and with a pearl onion and olives, real clean.  It’s the cleanest way to drink it.

Q: What are your plans for Canada Day?

DA: You know what I’m doing this July first? It’s a momentous July first for the country and certainly it’s a significant milestone for me.  I don’t mark birthdays except if they have zeros or fives, and I’ve got to mark this one.  But I will be actually working on my birthday. I’ll be driving to South Carolina, because I have a concert on the second of July. You know what? I’m working at 65 years old, a concert, yeah! Great way to spend my birthday.

A splash of dry vermouth

A splash of olive brine

Add a splash of dry vermouth to a glass. Swirl to coat and then dump out any excess. Shake the Crystal Head Vodka and olive brine together over ice and strain into the coated glass. Garnish with a skewer of two olives and one pearl onion. 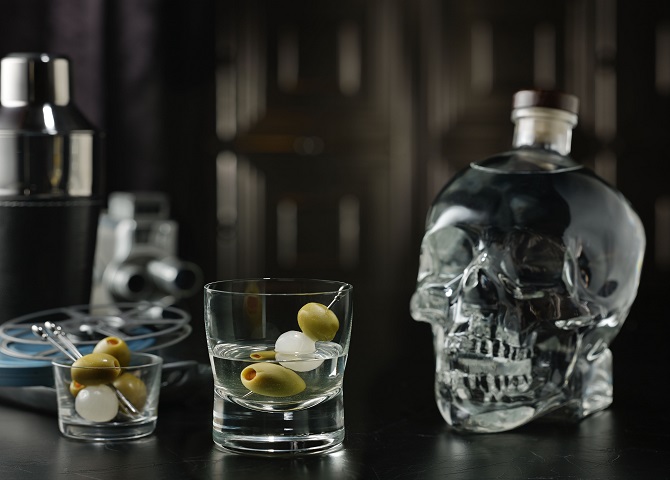