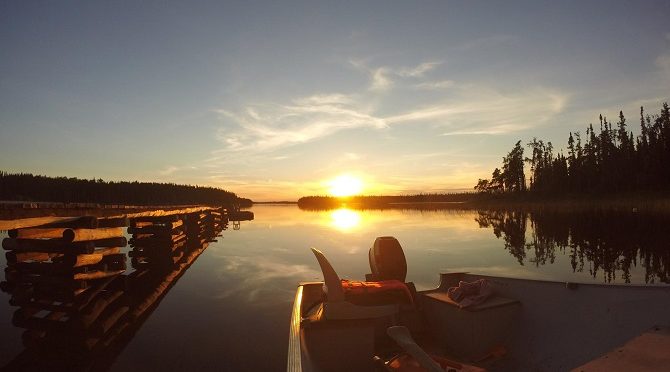 A white sign with red capital letters reading WELCOME TO PARADISE hangs at the top of a two-story log cabin. A slanted dark brown roof, covering the porch flanked by two bleached sets of moose antlers, hides a smaller, red sign with black capital letters spelling KNOBBY’S. I have arrived from Toronto to spend a week in the wild to go fishing – remote, away from crowds and the competitive race to reserve a decent campsite. I head up a 20-foot wooden ramp from the gravel parking lot, with my freshly bought goods from the local farmer’s market in hand. 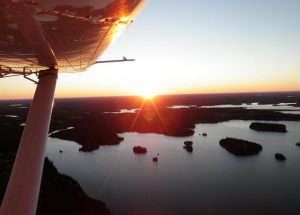 It’s still overcast this morning after last night’s rainstorm. I have arrived at Knobby’s, one of many of the Sioux Lookout Lodges and Outposts, to be flown 30-45 minutes to a small cabin on Bamaji Lake, one of the many lakes and that fill this vast water system in northern Ontario. For five days, I will live with solar powered electricity in the wilderness and fish giant trophy walleye, lake trout, perch, pike, smallmouth bass, muskie and whitefish. If I’m lucky, I’ll snag an award-winning 30 to 50 inch catch. Even if I don’t, there are still plenty of things to do in Sioux Lookout, which is paradise for myself and other outdoors aficionados.

I chose Knobby’s for the simple cabins they offer, although full electricity is available at Red Pine Lodge on Lake Minnitaki. Friends who visited last summer raved about Booi’s Fly-in Lodge and Outpost, which offers beautiful accommodations on a private island in Trout Lake. Either way, Sioux Lookout delivers robust ecotourism and adventure for all levels of comfort, at any time of year. Located in the stunning Kenora District of Sunset Country, your days will end with breathtaking sunsets in this expansive system of lakes and rivers that feed off of the English River.

Sioux Lookout forms part of an extensive waterway that has been used for centuries by many First Nations. It was named after the 18th century Anishnawbe who watched, from Sioux Mountain, for approaching Sioux warriors travelling by canoe to ambush their camps. This history is still referenced on the front page of the local newspaper, The Sioux Lookout Bulletin, by an illustration of an Anishnawbe man holding a hand above his eyes to scan the waters. 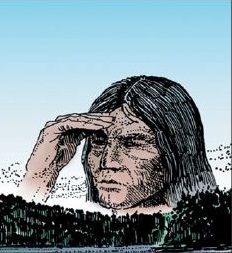 The town incorporated in 1912 quickly growing from a simple rail town to become a transportation mini-hub due to its accessibility via plane, train, boat and roadway. The discovery of gold in Red Lake in the 1920’s also helped with its growing popularity.

Today, Sioux Lookout, a.k.a The Hub of the North, facilitates travel to and from all northern communities in Northwestern Ontario. This small centre is home to over 5,000 people, but that number drastically increases in the summer months when flocks of North Americans, like myself, come up to enjoy pristine fishing and camping.

What to do in the Sioux 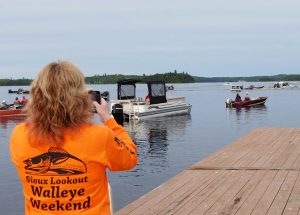 Whether you drive, fly or take a nice winding train ride in, a day or two in the town of Sioux Lookout is highly recommended. Be sure to check out the impressive history of the area in the two-story black and white Tudor-style train station that also figures as the Sioux Lookout Community Museum. The annual Blueberry Festival, held each August since 1982, hosts family-friendly events by day and adult socials by night. If you’re heading up earlier in the season, the Annual Walleye Weekend, organized by the Sioux Lookout Anglers and Hunters, runs the second weekend in June. This popular fishing festival awards cash prizes for the biggest registered catch. Don’t forget to record yours in the Master Angler’s Program’s commemorative book and purchase a badge before you leave – regardless of when you visit!

A picnic at Farlinger Town Beach with some delicious, fresh sandwiches from Pelican Lake Sandwich Company and a coffee from Roy Lane Coffee is a must. For dinner, Foxy’s Dining offers up juicy prime rib and steak and The Fifth Avenue Bar and Grill has Chinese food. And for the golfers, you can stay and play all day at the Golf and Curling Club, which offers some very decent lunch and dinner options.

If you are passing through Sioux Lookout in autumn, winter or spring, be sure to hire a guide to learn about the area. Check out the town’s Entertainment Series or visit Sioux Lookout’s Library to view a portrait of Peggy Sanders, the recipient of the Order of Canada in 2006 who founded the current library and helped build relationships between Aboriginal and non-Aboriginal communities.  You can also take in some original works by famous Woodland artists Carl Ray and Ahmoo Angeconeb.

Although Sioux Lookout may seem like any other charming Ontario town, its remarkable history and pure Northern Ontario wilderness will surprise you. 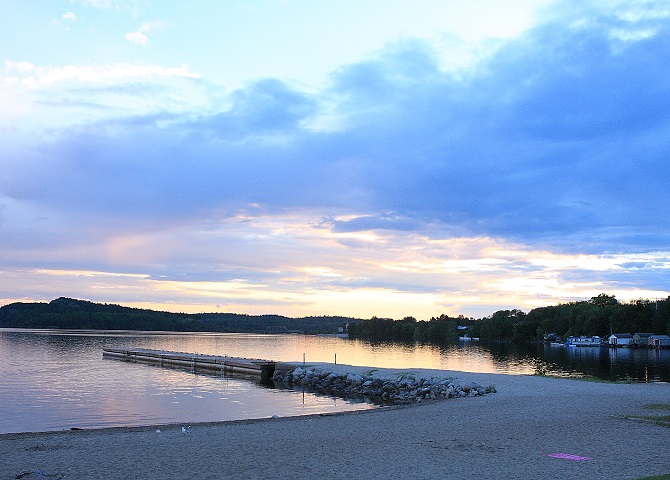