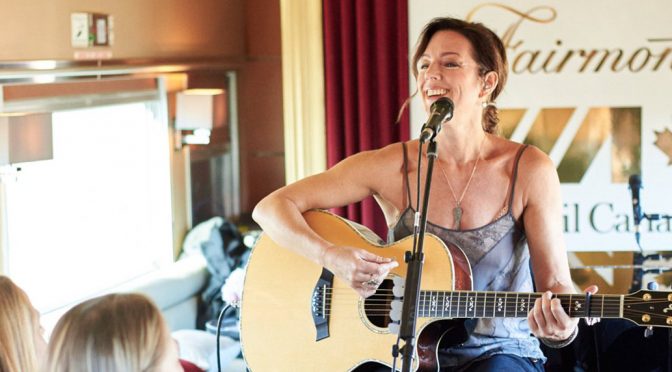 Recent inductee to the Canadian Music Hall of Fame, Sarah McLachlan is no stranger to travel, but, believe it or not, it was her inaugural voyage on a train. Of her trip so far she gushed, “I love this! It’s a beautiful way to travel, it’s fantastic!”

For Canada’s 150th, Fairmont* Hotels & Resorts partnered with VIA Rail (lucky us!) for a cross-country event and invited Ms. McLachlan along for the ride. She regaled the travelling group with a brag-worthy private concert and even offered up some time at the end for a Q&A.  Sarah, ahem, Ms. McLachlan, told us about her favourite places to visit in Canada, her morning ritual and how she doesn’t listen to music (nope, that’s not a typo).

Q: What is your favourite place in Canada?

SM: Tofino, on the west coast of Vancouver Island.  [The national park] and Tofino the town. It’s heaven on earth.  It’s a trek to get out there. It’s about a six hour drive from Vancouver, with the ferry included, but it’s so worth it. It’s glorious!

Q: And your favourite national parks?

SM: Banff is beautiful. Kejimkujik, I think that’s a national park too [it is! –ed.], that’s in Nova Scotia. I haven’t been there for years but I was born and raised in Nova Scotia so I spend a lot of time trekking around there as well.

Q: As a Canadian, what does 150 years of Canada mean to you?

SM: We’re a young country still, in the grand scheme of things, [but] I think we’re pretty great! We are a beautiful country, we’re a diverse country. There’s so much going on culturally, geographically, there’s so much to see and this [by train] is one of the most beautiful ways of seeing it.

Q: Are you planning anything for Canada 150?

SM: I’m going to be in Edmonton on July 1st, celebrating by playing.

Q: What were your most memorable shows?

SM: Quebec City, Festival d’été, a couple years ago,  that was my biggest crowd, 75,000 people, and it was a huge thrill and it’s in the Old Town, so it’s aesthetically beautiful, you look out and you’re in the walled city. That was pretty incredible – and I have to say that Quebec audiences are pretty incredible.

The first time I played the Spectrum in Montreal, I was touring across Canada […] and playing to 75 or 100 people […] and then we went to Montreal and played the Spectrum. I walked out onto the stage, and I think it’s maybe 900 people, and it was sold out and they were screaming. And I felt like the Beatles for a moment. […] and I was like, “Ok can I just stay here and play every single night?”

Q: What are your favourite cities to play around the world?

SM: I’ve mostly played in North America over my career. I’ve done certain gigs in Europe. It’s been quite a while since I’ve been over there. I loved playing Royal Albert Hall. I love playing in New York City, I love the Beacon in New York. Sydney Opera House – that was kind of sweet too!

I love travelling! I love that I get to go to all these crazy places under the guise of “I’m working”. I love singing, I love making music and every day I pinch myself that I get paid for this!

Q: What music do you listen to?

SM: I rarely listen to music, actually. I know that sounds weird, [but] it’s going on in my head all the time, when I’m writing anyway, which is most of the time. I have my own stuff going on automatically whether I like it or not, the noise is constantly there.

I love Brian Eno, I like ambient music, just quiet, chill. Love Peter Gabriel […] if I’m hiking, and I’m not working on lyrics, because hiking is like a walking meditation, I do it every morning and figure stuff out and write.

Q: Do you have any rituals?

SM: I try and hike every morning. I try to get into the woods every morning and I would say that’s probably my biggest ritual that I need. Between that and putting my fingers on the keyboards every day – I have to do that as well. Hiking, in the woods, by myself with my dog… best meditation. 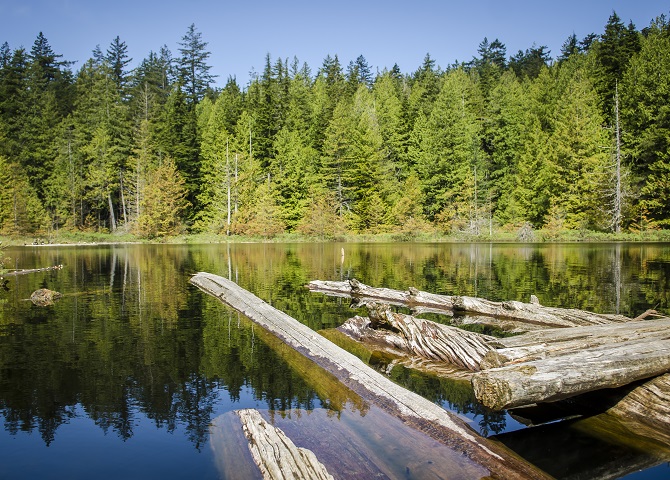 Whyte Lake Trail and the Baden-Powell Trail in West Vancouver

Celebrate Canada’s 150th with VIA Rail and Fairmont!

(*interesting side note: many of the now-branded Fairmont hotels in Canada were originally built along the railway, to serve visitors)