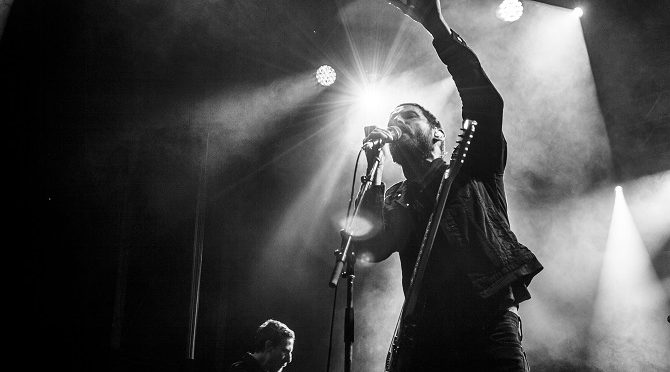 The railway is in Montreal-based rock ’n’ roller Sam Roberts’ blood, so on the cusp of Canada’s 150th—the founding of which was based on the steel rails that helped connect the country—he had lots to say about it. The six-time JUNO Award winner has taken his tunes around the world since his first release in 2002, most recently hitting the road for 2016’s Terraform. He has family ties to the train in his grandfather, who worked on the railway in South Africa, where his parents are from. That history sparked an interest in trains for Roberts from an early age, and one that’s stuck with him.

“It was how I got to Toronto all the time,” Roberts says over the phone from his home in Montreal’s Notre-Dame-de-Grâce neighbourhood. “My first time ever visiting Toronto was on a VIA train. And by the way, on the train ride from Montreal to Toronto, you see far more of the beauty of the scenery than you do on the 401.”

It also inspired him to actually head overseas to ride the same railways his grandfather did and see just how he’d earned his living. Sam has travelled from Johannesburg to Cape Town, on the continent’s southern tip, and went from Johannesburg again to northern Zimbabwe—a trek that took two days.

“I played a lot of cards. A journey on the train like that stops becoming about hurrying to where it is you’re trying to get to, and becomes about the journey itself, and the people you meet along the way and the time you spend.”

“You end up having these condensed friendships that last for 24 or 48 hours, but they’re very meaningful even in their brevity,” Roberts says. “…you’ve shared this experience together. I think that’s the one thing that really resonates with me about travelling by train.”

Trains in Film and Literature

But Roberts’ relationship with the railway goes even beyond experience and into the realm of education, and his passion for its history is clear in the way he speaks about it. He recommends checking out Rocky Mountain Express, an IMAX movie that follows a restored Hudson steam locomotive through the Rockies. While talking about the journey through Rogers Pass in B.C. as one of the country’s most stunning views, he mentions that Yukon-born author Pierre Berton’s book The Last Spike, which documents the construction of the Canadian Pacific Railway, should be mandatory reading for everyone in Canada. Rogers Pass isn’t far from Craigellachie, B.C., where the Last Spike was driven 132 years ago to complete the country’s first transcontinental railroad. 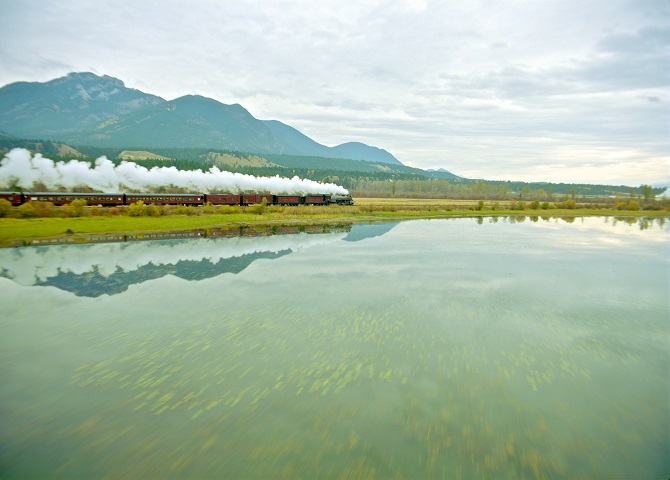 “When you travel through in the winter and see these trains rumbling through the mountain passes, it’s really astonishing that people had the wherewithal and the endurance to actually make that happen,” Roberts says. “To think of what we would be as a country, or not be, rather, if it didn’t exist.”

It’s no surprise, of course, that Canada, celebrating its 150th in July, would have its fair share of travellin’ songs, and the romance of the railroad has helped spawn quite a number of tunes about the train. One of the best known may be Gordon Lightfoot’s epic “Canadian Railroad Trilogy.” But when Roberts thinks about the song he connects most to the train, a different Lightfoot tune comes to mind. His pick is the sweet and delicate “Steel Rail Blues,” which follows a “lonesome boy” pining for a far-away girl, dreaming of the “big steel rail” that could carry him home.

“It’s definitely one of the great Canadian songs in general,” Roberts says. “The fact that it acknowledges the role of the railway, as much as it’s a part of who we are and how we identify ourselves as Canadians. It’s a hopeful song, it’s a melancholy song, and ultimately a song about human folly. But somehow the train is almost a character in the story, and a lifeline. It’s the promise of going home, as represented by the train in that song. I think that makes it one of the quintessentially Canadian songs.”

Next week in Part 2, we’ll share Roberts’ thoughts on the places that make his hometown of Montreal such a magical city, and learn about some of his favourite Canadian tour stops.

One thought on “Sam Roberts, Part 1: Love Affair With Trains”