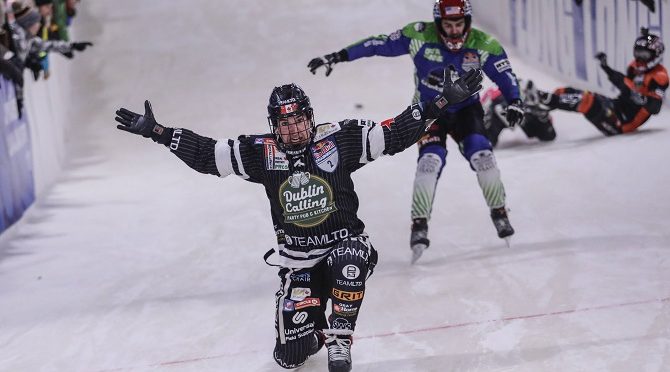 “I miss home”, Scott Croxall admits when I ask him if there is anything else he wants to add to our interview, “I’ve been on the road for three weeks and I’m ready to be back”.  “Home” for Scott is Port Credit, Ontario, where he was born and raised, and where his career in the extreme sport of Ice Cross Downhill began, sort of.

“We played every sport growing up”, Croxall says of himself and his older brother, Kyle. After a trip to Quebec City to see his brother compete in Ice Cross, Scott was hooked too. “You qualify on flat ice, and then go to another city to race”. This seems crazy to me, given what an Ice Cross Downhill track looks like – no flat ice in the world can prepare you for the ups and downs. But that’s the way it is with extreme sports – either you love the adrenaline or you stay away.

“There are no places to practice in Canada”, Croxall explains. In fact, each course is created and built for races, and the first time you get to skate on it is in competition. But Croxall is the “all-in” type, as exemplified by his hectic lifestyle. Scott doesn’t have a lot of time to explore his home and native land, he’s either training, working (at his own company, TEAMLTD Lifestyle Apparel) or travelling for competitions. However, when he does get breaks, he makes sure to spend some time at the places that make home, home.

In Port Credit, that’s the Pump House Grill, where before and after each trip, he indulges in a wing night with friends and family. Everybody’s got their local hang out, and the Pumphouse is his.

Living so close to The Big Smoke (I mean “the 6ix”), it’s no surprise that that’s where Croxall heads to take in the nightlife and sporting events. As we chat about Toronto, he mentions the usual suspects, “I love to see the Maple Leafs. The Air Canada Center is great for sporting events” and “for anyone who hasn’t gone, the CN Tower is worth the visit”. I ask if he’s tried the EdgeWalk (seems a natural fit) and he admits, “not yet. But I would!”

Though Scott mentions a few other places in Canada he loves (Whistler and Banff for skiing), his voice changes when he talks about Muskoka, Ontario, where his family has a cottage, and where he spends as much time as possible in the summer. “There’s always something going on there”, he says of the area, which is a summer escape for many Torontonians.

In the warmer months, Scott trades his skates for skis – waterskis that is. He’s very involved in Muskoka’s Summer Water Sports, which holds waterski and wakeboard stunt shows, both of which Scott takes part in. “We do it all… barefooting, pyramids…” See the guy at the bottom, second from the left? That’s Scott. 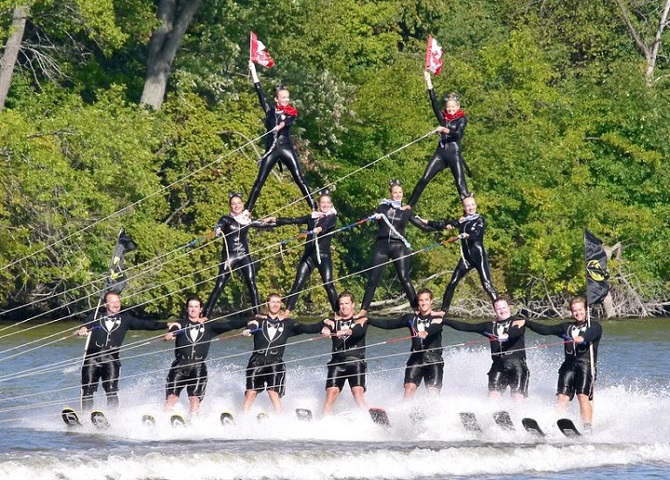 As part of the competitive waterski team (the only one in Canada!), he spends a lot of time on all three of the main lakes in the Muskoka area. And at night he heads over to Kee to Bala, a beachfront bar overlooking the water of Bala Bay, an offshoot of Lake Muskoka.

The gorgeous setting and great venue attracts some of Canada’s top bands (Blue Rodeo, Arkells, Matthew Good) but it’s the Tragically Hip concert that Scott cites as his favourite to date. “So many famous bands play there”, he boasts, “and friends of mine own it, so I’m there a lot”.

If you happen to find yourself in picturesque Muskoka, peckish after taking in a concert or waterski show, there are a few great food options in the area. Stop in at Three Guys and a Stove in nearby Huntsville, which offers fantastic fare and arguably the best slogan I’ve ever heard: “A restaurant for people with taste!” Or head over to The Butcher’s Daughters for something lighter, followed by a scoop (or two) of ice cream at Kawartha Dairy. To get a sense of the area, on a grander scale, a trip to Dorset Lookout Tower is a must.

Lucky for him, Scott Croxall will be back in Canada soon, as the Red Bull Crashed Ice tour lands in Ottawa in early March. It’s worth making a trip to see it, if you haven’t yet witnessed the insanity of the sport firsthand. Good luck Scott, here’s hoping you get some well-deserved rest back in Port Credit after a win in Ottawa!